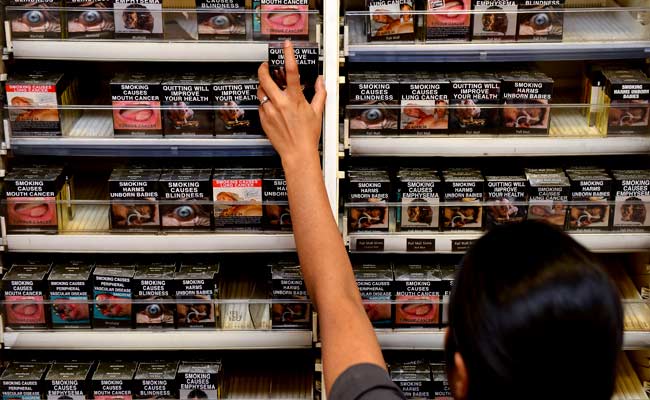 In 2012, Australia became the first country to mandate plain packaging for cigarettes, in a bid to reduce smoking rates, and has since been followed by other nations including France and Britain. (AFP/ File Photo)

SYDNEY:  An Australian law requiring cigarettes to be sold in plain packaging has received a boost after an international tribunal said it would not hear a tobacco company’s legal challenge.

The government in Canberra today welcomed the decision by the Permanent Court of Arbitration to refuse jurisdiction over a case brought by smoking giant Philip Morris.

“We welcome the unanimous decision by the tribunal agreeing with Australia’s position that it has no jurisdiction to hear Philip Morris’s claim,” she said in a statement.

In 2012, Australia became the first country to mandate plain packaging for cigarettes, in a bid to reduce smoking rates, and has since been followed by other nations including France and Britain.

The Permanent Court of Arbitration, established to settle international disputes, declined to comment on its decision to refuse jurisdiction for the arbitration proceedings in Singapore.

Philip Morris accused Australia of using a procedural issue to avoid addressing the legality and effectiveness of plain packages, calling the move “regrettable”.

“There is nothing in today’s outcome that addresses, let alone validates, plain packaging in Australia or anywhere else,” Philip Morris’ senior vice president and general counsel Marc Firestone said in a statement today, adding that his firm was reviewing the decision to determine its response.

“This case has never been about a government’s undeniable authority to regulate in the public interest. Nor has there ever been any question that tobacco products merit strict oversight,” Firestone added.

“In our view, the real point is simply this: even when pursuing tobacco control objectives, governments are still accountable if they choose to use unlawful means.”

Philip Morris launched the challenge in 2011 after plain-packaging legislation was passed, using a 1993 trade deal between Australia and Hong Kong that included foreign investment protections.

Four tobacco firms including Philip Morris in 2012 lost a legal challenge against the laws in the High Court of Australia, which found they did not breach the nation’s constitution.