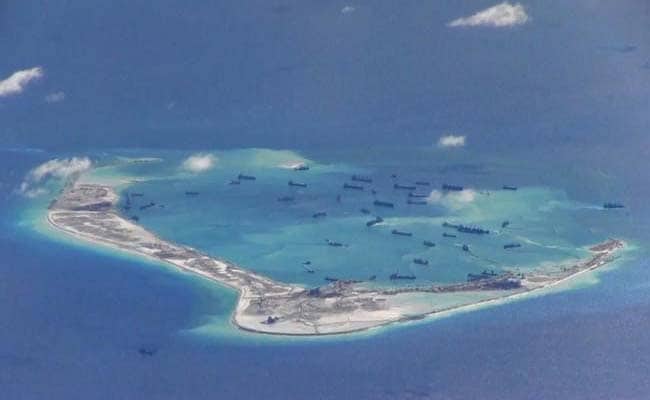 BEIJING:  China today brushed aside the UN tribunal arbitrating on the disputed South China Sea saying that it will not accept its verdict even as an official daily said US ships and aircraft in the area challenging Beijing’s sovereignty will lead to its further militarisation.

“China’s territorial sovereignty should be decided by all the Chinese people, and no other people or organisation has the right to handle it,” Chinese Foreign Ministry spokesperson Hong Lei told media here replying to a question on the recent release of a court hearing record by an international tribunal in the Hague lodged by the Philippines.

<div id=’ndtvrelcontent’></divThe Arbitral Tribunal under the UN Convention on Law of Seas (UNCLOS) established at the request of the Philippines has no jurisdiction over the case, Hong said.

China will not accept any third-party settlements of territorial disputes, he said urging the Philippines to change course and return to the track of negotiations.

Meanwhile, state-run Chinese daily Global Times said US actions of sending B-52 bombers and ships into the disputed sea would prompt militarisation of the artificial islands being developed by China.

“The moves of the US will undoubtedly propel China to accelerate militarising its newly built islands and make them capable of coping with direct military threat from the US.

“As the Chinese mainland is far from this area and China only has one aircraft carrier, it would be too late for China to send fighter jets from the mainland when US jets intrude into the airspace of the islands. The only choice is to deploy the fighter jets on these islands,” it said.

“China has stressed that these islands serve a peaceful purpose, but the premise of such assertion is that no external military force threatens their security. The US military is undermining this premise, and China should carry out corresponding security deployment,” it said.

“Nowadays US warplanes and bombers fly over nearby waters and airspace at will. If China does not take due measures, it can be implied that it tacitly approves such hostile actions. This in turn will jeopardise the country’s SCS strategy.

“China therefore has no other options, but to build up its military capability on those islands. In that case, next time when the US warplanes come over again, there will be Chinese military planes taking off and safeguarding our sovereignty.

“If all parties wish for a peaceful SCS, they should fulfil their responsibilities rather than providing assistance to the US which intends to intrude China’s island de-militarisation. The US’ exercise of freedom of navigation in the SCS should not threaten the security of Chinese facilities.

In view of China’s overall military capability and national strength, the US should renounce its arrogance,” it said.