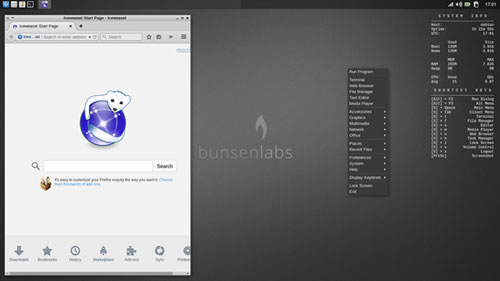 BunsenLabs is one of three CrunchBang replacements that mimic the lightweight but highly functional OS. CrunchBang++ and CrunchBang-Monara are the other two.

BunsenLabs Linux is based on Debian Jessie and continues to run a highly configurable Openbox window manager as the desktop environment. The current release is version 8.2, code-named Hydrogen. The release candidate 1 version was released earlier this year.

If you have a tendency to uninstall applications you never use in your current OS, you are a good candidate to try out this minimalistic computing platform. It has the everyday programs you need, and you can add whatever is missing from its own software repository and the Debian package channels.

BunsenLabs Linux is far from being wimpy or unproven. It performs well. It should — it’s based on a solid lineage.

This reborn CrunchBang is the result of an accomplished community of developers who rallied behind the revival. The developers appear to be well-schooled in what made CrunchBang Linux so adored.

BunsenLabs Linux has the familiar minimalistic look and feel of the sidelined CrunchBang distro.

Many of its preinstalled applications use the GTK+ widget toolkit. Its light and minimal design is enhanced with the Tint2 Linux panel/task bar at the top of the screen.

The panel bar includes a system tray, a task list, a battery monitor and a clock on the right side. A graphical configuration tool helps make it easy to customize.

The panel bar on the left displays a launcher for the default Mozilla Iceweasel Web browser, Thunar file manager and terminal window. The bar also serves as a dock for open applications. It lacks applets to run on the bar, however.

BunsenLabs has a nice procedure for changing virtual desktops. The center portion of the panel bar is actually two elongated buttons that serve as the virtual workspace switcher. It is preconfigured for two desktops. You cannot add more. You click one or the other to change virtual workspaces.

I was a big fan of CrunchBang years ago when I transitioned to the Linux OS. That experience convinced me that I could rely on Linux as a full-time OS replacement to Microsoft Windows. I eventually left CrunchBang behind for other desktop options, but I was never disappointed in its performance.

BunsenLabs Linux lacks by design a menu button on the left edge of the panel. Instead, you activate a handy pop-out menu by right-clicking anywhere on the desktop.

You can adorn the desktop landscape with a few Conky configurations. A system monitor Conky display is prepositioned in the upper-right quadrant of the screen.

The default Conky display shows basic system information on the top half and a list of some dozen shortcut keys. This functionality is very similar to function key shortcuts in other operating systems.

A minimalistic OS is not always a good entry point for new Linux users. It may not be a good choice for maintaining numerous work tasks and multitasking. That is definitely the case with BunsenLabs Linux. I certainly can get basic computing tasks done, but using this distro long-term for the week I tested it became tedious and sometimes frustrating.

For typical users, this type of OS is not user friendly out of the box. It offers a minimal menu of installed software. This is perfectly acceptable with the philosophy of the minimalistic design, but the design does impose limitations on how you use this distro.

I can work easily with the default Web browser. I was delighted to find my workhorse Geany IDE editor installed as the only text editor. The VLC media player is also a very good choice for the included software tools.

Other bundled titles are the Catfish search utility, Gnome Archive Manager and the htop task manager. That is all you get in the Accessories category. The few included applications are useful, but the list is very short. For instance, you get the Mirage Image Viewer and the Xfce 4 Screenshooter for capturing screen images.

For instance, you can do a one-click installation of GIMP, Blender, Inkscape, Mandelbulber, Viewnior Screenshots and Scrot ScreenShooter. You also can install three separate multimedia tools.

BunsenLabs Linux is a successful reinvention of the defunct CrunchBang Linux distro. The latest RC1 version of the 8.2 edition is a polished and functional OS. It has a balance of minimalistic design and the ability to extend the software base to add functionality.

Its gray and black theme background images leave much to be desired. A splash of color wouldn’t impede the minimal view or performance, and color trimmings would go a long way to making BunsenLabs Linux visually appealing.

The new team of developers has done a good job of picking up the pieces of what was CrunchBang Linux. BunsenLabs Linux is not everybody’s ideal distro, but those who crave performance over bloat and fancy features will find their comfort zone here.

Want to Suggest a Review?

Is there a Linux software application or distro you’d like to suggest for review? Something you love or would like to get to know?

Please email your ideas to me, and I’ll consider them for a future Linux Picks and Pans column.

And use the Talkback feature below to add your comments!

BunsenLabs Linux does a bang-up job of picking up where CrunchBang Linux left off.