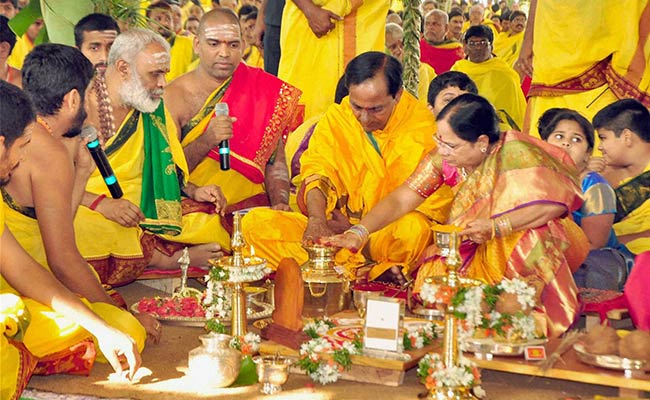 The ‘Ayutha Chandi Maha Yagam’, being performed for universal good and peace, began on December 23.

About 2,000 pundits from Telangana, Andhra Pradesh, Karnataka, Tamil Nadu and Maharashtra are performing the rituals at the ‘yagam’.

The Telangana Chief Minister had made it clear that no government money is being spent for the ‘yagam’.

However, opposition parties such as Congress, BJP and CPI(M) hit out at him for allegedly misusing government machinery.

Alleging that donations have been received from contractors and businessmen by the ruling TRS, All India Congress Committee spokesperson and former lawmaker Madhu Yashki  Goud had demanded that the details of such collections be made public.

Congress would seek a CBI inquiry into the matter otherwise, he had said.

BJP disapproved of the “exorbitant splurge of money and misusing government machinery for a personal event”, though Telangana BJP spokesperson Krishna Sagar Rao said the party supported performing “yagnas and yagas” for the larger public good.

The Telangana CPI(M) unit alleged that the ‘yagam’ being performed by the chief minister is against the Constitution, as it promotes superstition among people.

President Pranab Mukherjee is expected to attend the ‘yagam’ on December 27, according to a release from Mr Rao’s office.