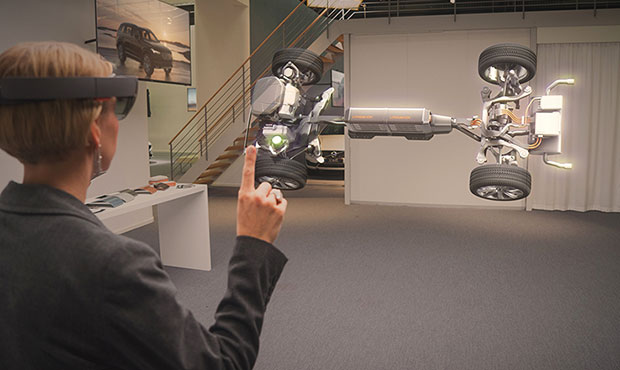 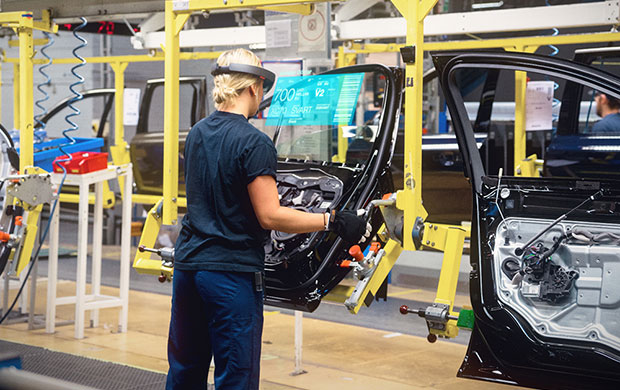 Microsoft HoloLens on Thursday announced a partnership with Volvo Cars to develop a new holographic technology that could change the way consumers experience auto showrooms.

Volvo is the first automaker to express interest in Microsoft’s HoloLens technology as a way to provide such details to consumers.

“We are currently exploring the potential of HoloLens to change the way consumers may discover, experience and even buy cars in the future,” said Sascha Heiniger, spokesperson for Volvo Car Group.

“We are very eager to now bring this experience to customers and get their feedback,” he told TechNewsWorld.

The use of HoloLens technology won’t substitute for visiting a showroom.

“This is technology that is meant to enhance the act of looking at a car, and HoloLens would just be an extension of the showroom experience,” said Jeremy Carlson, senior analyst for autonomous driving at IHS Automotive.

“It is there to describe systems that consumers don’t regularly see,” he told TechNewsWorld.

One such example would be the active safety systems. It’s not practical to demonstrate them during a test drive, because it would be difficult to do so without putting the driver and passengers at some risk, noted Carlson.

There may be a special place for augmented reality in upper-end auto sales.

“The advent of digital into the car retailing process started a few years back, and it’s a place where BMW, Audi and Mercedes Benz have already captured customers’ attention by having lifestyle showrooms in cities — for example the Audi City in London,” said Praveen Chandrasekar, automotive and transportation research manager at Frost & Sullivan.

“The concept, in essence, is like a Tesla mall showroom where the idea is to indulge the customer in a digital format to check car features, and not push them in the traditional brick dealer retail format on purely selling the vehicle,” he told TechNewsWorld.

Digital showrooms have utilized the concept of augmented or virtual reality to allow customers to configure vehicles in many different ways, and to explore their features and their look and feel, Chandrasekar added.

“In some cases, OEMs like Cadillac and Audi have also introduced AR apps that allow customers to point their phone app to the vehicle and check out the features, but this is a limited experience,” he noted.

What You Can’t See

Holographic images could provide details that otherwise couldn’t be seen — from drive traffic to engine components. The tech likely would be aimed at early technology adopters and consumers who do more than walk around a car and kick the tires.

“This technology could describe how the systems work, but also show off the new technology of the car to the buyer,” said IHS’ Carlson.

Volvo’s partnership with Microsoft also could enhance its image in the luxury market.

“The overarching concept here is to immerse the digital age customer in a digital experience without pushing them to actually buy a vehicle,” said Frost’s Chandrasekar.

Further, dealers could use the technology to educate their staffs, and to alert car owners to potential problems.

“OEMs could craft a virtual reality environment to show some features of the car, and this allows the dealer to focus on the sales process,” noted Carlson. “On the other end of the spectrum, this technology could allow the dealers to explain repair issues that can’t be easily seen. Some people will like that extra bit of knowledge of what part needs to be fixed and why.”

Microsoft’s HoloLens technology could be a good way to draw technophiles into Volvo showrooms. It also might be instrumental in the development of a virtual reality showroom experience.

“Doing showroom visualizations will have some utility, but the product enables people at home who would otherwise explore options online to sit in the car, drive the car, and perhaps explore inner workings of engine systems,” said Glen Hiemstra, founder of Futurist.com.

However, neither scenario is likely to be a game changer for the automotive market or the holographic technology market, he told TechNewsWorld.

“The use will be limited to those that a) have a Hololens, and b) want to buy a car,” he pointed out.

“If the idea is to enable people, while in the showroom, to also put on a HoloLens and try some visual things, then for a few months or a year or two that may have some novelty appeal vs. a dealership who does not have the tech,” he acknowledged, “but the novelty will fade. Color me a bit of skeptic on the VR hype.