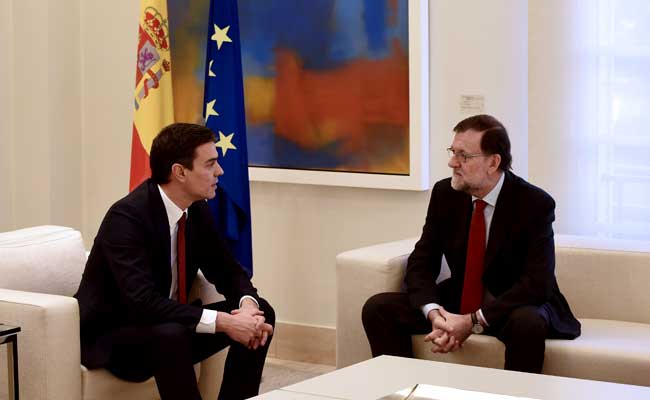 MADRID:  The leader of Spain’s opposition Socialists said today that he will not support any effort by acting Prime Minister Mariano Rajoy to stay on in his post via a coalition or a minority government.

Pedro Sanchez made the declaration to reporters after meeting with Rajoy, who is trying to negotiate a way for him and his centre-right Popular Party to remain in power after it won the most votes in a national election on Sunday but fell far short of a parliamentary majority.

Rajoy did not comment after the two met at the presidential palace. The splintered vote that marked the end of three decades of two-party domination in Spain gave Rajoy’s party 123 seats in the 350-member lower house of parliament, down from the 186 it won in 2011. The Socialists got 90 seats, followed by the far-left Podemos and allies with 69 and the business-friendly Ciudadanos with 40.

Spain has never had a “grand coalition” of its two main parties. Rajoy is scheduled to meet with the leaders of Ciudadanos and Podemos next Monday.

Analysts predict weeks or months of uncertainty before the country will have a functioning government led by the Popular Party or the Socialist Party – or a new election in the spring if neither party succeeds.

Rajoy in January faces a parliamentary vote on whether he can reassume his position as the leader of the government. In the first vote, he would need more than 50 percent to form a government. If he falls short, he must get more votes for him than against him in a second ballot 48 hours later.

That’s a lower bar allowing parties to abstain, letting a rival into power in return for concessions. Ciudadanos has already said it will abstain, but Sanchez ruled that out for his Socialists.