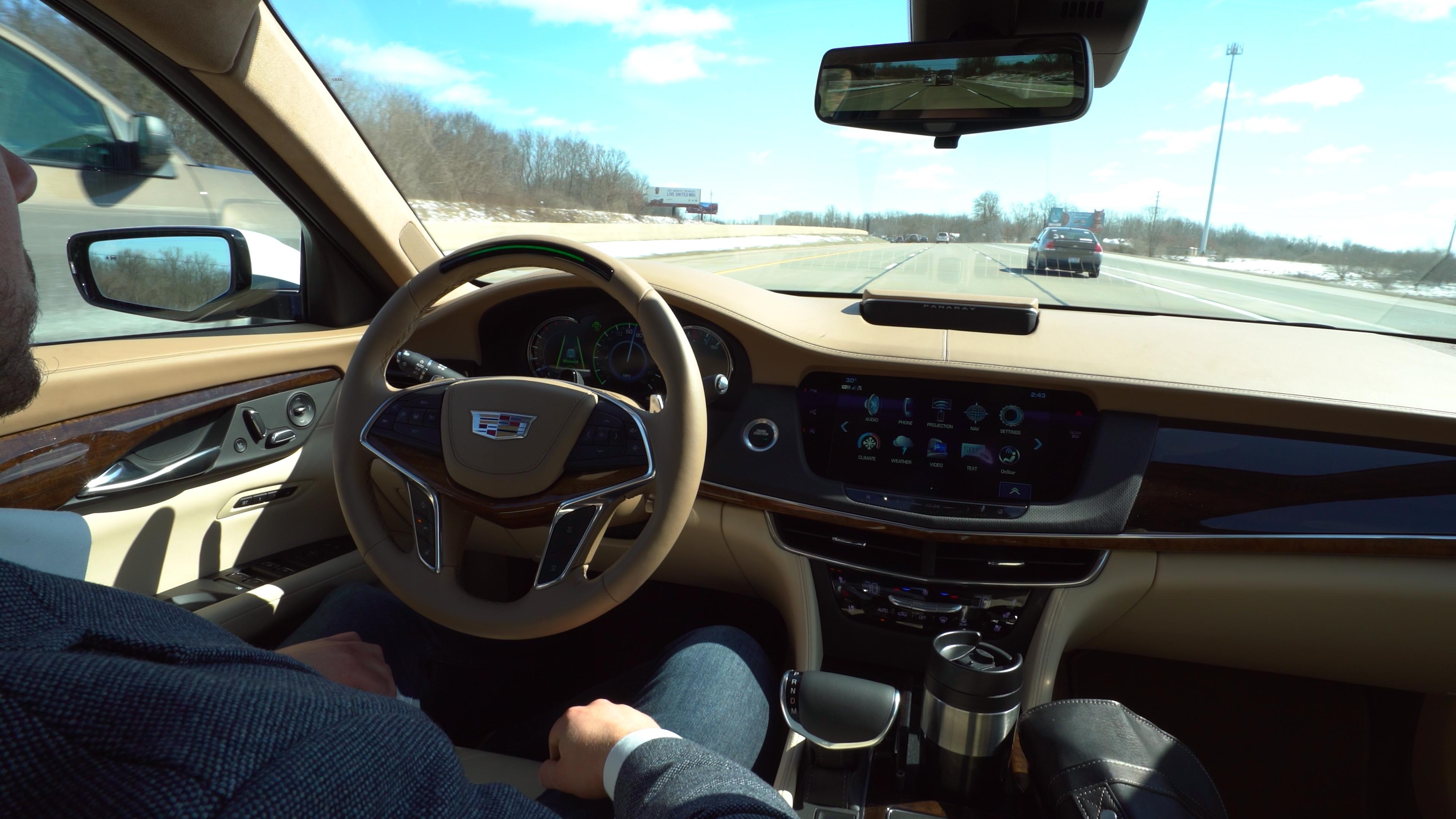 If you’ve finally decided to trade in your current ride after five or more years of faithful use, you’ll find a brave new world of advanced technology that either didn’t exist or was available only in limited higher-end models the last time you set foot in a new-car dealer’s showroom.

Sophisticated safety systems that can take control of a vehicle away from the driver to avoid a crash are becoming commonplace on all but a handful of models, and you’d be hard-pressed to identify a new car that didn’t come with or offer the latest connectivity features that deftly integrate a mobile phone’s functions into the vehicle’s so-called infotainment system for safer hands-free use.

As always, higher end cars receive the latest and most fanciful advancements in vehicular technology, but even mainstream models are pushing the proverbial envelope with an array of advancements. Here’s a quick look at the 10 hottest gizmos and gadgets debuting on cars and trucks for the 2018 model year.

Leave The Driving To Us

Cadillac’s long-awaited semi-autonomous-driving Super Cruise system finally comes to market for 2018 as a $2,500 option on the brand’s flagship CT6 sedan. It incorporates the car’s existing suite of driver-assistance systems, including adaptive cruise control, blind spot and lane-monitoring systems, and forward auto-braking – and enhances them with a self-steering function and advanced LiDAR-scanned mapping. Though it’s limited to use on multi-lane highways, Super Cruise affords hands- and foot-free driving by automatically maintaining a safe distance between the vehicle and traffic ahead at a speed selected by the driver, and keeping the car centered within lane markers.

A driver attention system keeps an electronic eye on a motorist’s head position via a steering wheel-mounted camera to ensure he or she is properly and prudently monitoring the road and is ready to re-take control of the vehicle if necessary. Should the driver be caught, say, reading a book or is applying makeup while in Super Cruise mode, the system will give a series of audible and visual warnings to tell him or her to refocus on the task at hand; if after continued warnings the system determines the motorist is unresponsive, it will bring the vehicle to a controlled stop and, if necessary, contact first responders.

Steering Out Of Trouble

Taking yet another step toward fully autonomous driving for 2018, both the redesigned Lexus LS sedan and Volvo XC60 crossover SUV can literally take the steering wheel away from the driver in certain situations if necessary to avoid collisions. The LS offers a new Intuitive Pedestrian Detection with Active Steering system that will apply the brakes and steer around a person if he or she happens to be in its path, while staying within the current lane of traffic. Meanwhile, the XC60 incorporates auto-steering in its low-speed City Safety system to avoid hitting other vehicles, pedestrians, and even large animals in its path; auto-steering is also now included in the XC60’s optional Blind Spot Information System and its new Oncoming Lane Mitigation system to help avoid collisions with vehicles in adjacent lanes.

As it is, Mercedes-Benz’s big S-Class virtually defines excess with regard to over-the-top luxury features like heated armrests, but the 2018 version of this serene sedan can even further a motorist’s well-being thanks to a newly available ENERGIZING Comfort function. It adjusts the car’s climate control, seat heating, cooling, and massaging functions, ambient lighting, audio system programming, and even the car’s automatic fragrance dispensing system according to six selectable programs claimed to maximize both a motorist’s overall well-being and his or her performance.

These 10-minute mobile spa visits are designed to enhance “Freshness,” “Warmth,” “Vitality,” “Joy,” and “Comfort,” along with a “Training” function with simple exercises designed to promote muscle relaxation, muscle activation and balance. Color graphic visualizations are displayed on the car’s infotainment system screen, with pre-selected music running in the background. Five tunes are already stored in the system, and if the driver uploads his or her own songs, the interface analyzes and assigns them to a specific program according to the number of beats per minute. The S-Class’s 64-hue ambient lighting changes according to the car’s ambient temperature, can welcome the driver and passengers with a custom atmosphere, and can be set in either of five intensity levels for four separate zones within the cabin.

Audio purists have long decried the inherent loss of fidelity in today’s digital music, arguing that it loses up to 90% of its sonic details when it’s compressed and loaded onto a smartphone. While the auto industry briefly toyed with and subsequently nixed the notion of in-dash turntables that would bring the warmth and richness of vinyl analog recordings to the family car, the new-for-2018 Hyundai Elantra GT and Kia Stinger models are taking a more practical approach to upping the aural ante. Both models offer Harmon’s new Clari-Fi system that purports to restore digital audio signals to full fidelity. The system scans compressed audio files for lost music details and corrects waveform deficiencies to create clearer, crisper, wider, and more dynamic source quality.

With many vehicles already offering built-in Wi-Fi hotspots for connecting portable devices to the internet, the redesigned 2018 Lincoln Navigator goes a step further with the technology. The full-size SUV’s available dual-screen rear entertainment system can now accommodate a Slingbox streaming media device that enables passengers to access live streaming TV channels while on the road.

While some automakers have already digitized the owner’s manual, Hyundai’s Genesis luxury-car division gives it the augmented reality treatment for 2018. A free download for iPhone and Android-based devices, the new Genesis Virtual Guide leverages 2-D and 3-D tracking technology to make looking up how a particular system or function operates as easy as pointing a phone or tablet at it. The app includes 135 how-to videos and 25 3-D overlay images that pop up on a smartphone or tablet’s screen when the device’s forward-facing camera is focused on a particular spot within the car’s engine bay or interior, along the exterior, or within the dashboard’s instrument panel. Aiming the camera at a specific part of the engine will display maintenance instructions, while a “button scanner” function identifies key control functions on the dashboard and allows a user to access instructional videos that demonstrate operating key features.

One of the biggest bugaboos reported by new-car buyers in recent years, has to do with balky Bluetooth mobile phone pairing. Honda seeks to make this process much easier in its redesigned midsize Accord sedan via so-called Near Field Communication (NFC) technology. Though its use is (at least for now) limited to Android phones, all a motorist has to do to pair a phone is to simply tap it against a stylized “N” logo on the dashboard. Most recent cell phones incorporate an NFC chip, which otherwise works with tap-to-pay systems at stores and fast food restaurants.

Parking, especially in crowded urban environments, is the bane of many motorists. Today’s cars help make the matter easier and safer with front and rear proximity alarms, backup cameras, and even self-parking systems. BMW models will go a step farher for 2018 by incorporating technology from the smartphone app company Parkmobile that helps drivers reserve and pay for parking in 250 cities across the U.S. and Canada via the cars’ iDrive infotainment system. This includes locating both available on- and off-street parking, and airport and event reservations. Users are given a choice of parking locations based on current GPS coordinates, and can preselect parking times with the ability to extend sessions remotely via the companion ParkNow app.

Don’t Make Me Come Back There

Keeping the peace among bored and irritated children that are confined to a car during a long road trip is a ritual that likely dates back to the Model T era. Sure, rear seat entertainment systems and mobile technology have replaced playing Auto Bingo or singing “99 Bottles of Beer on the Wall” to help pass the time, but Honda is now letting parents keep a closer eye – and ears – on the kids in its redesigned Odyssey minivan via a pair of new features. CabinWatch lets parents snoop on the kids via an embedded camera and dashboard video display (parents can even electronically observe an infant strapped in a rear-facing safety seat), while CabinTalk lets both front- and rear-seat occupants communicate back and forth without having to shout.

One of the real thrills inherent in driving a high-performance car is experiencing the forceful and throaty growl of the exhaust system upon startup or whenever one gives the throttle a solid push. Unfortunately, this can be a major annoyance among the neighbors, especially if the vehicle’s owner keeps odd hours. To help preserve the peace, Ford is offering a new “Quiet Mode” function for the updated 2018 Mustang that essentially muffles its riotous roar to a subdued whisper when activated. Once out of earshot the driver can fine-tune the system according to selectable levels of audible aggression, including sport and track modes.