Air passengers are being offered more ways of getting online 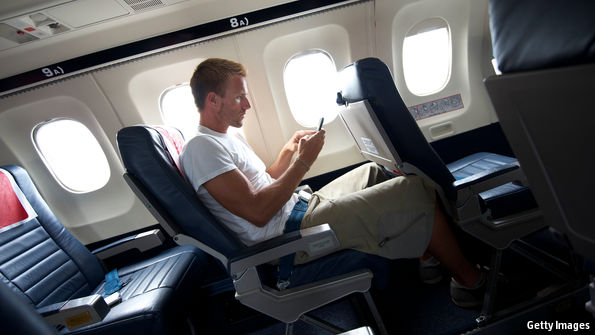 LAST week Icelandair unveiled what it described as Europe’s first “gate-to-gate” Wi-Fi service on most of its routes. It says onboard internet will now be switched on from the moment passengers board the plane to when it reaches the gate at the other end—including during takeoff and landing.

It is the latest step in the unstoppable rise of connectivity in the clouds. At the same time that Icelandair was trumpeting its new service, American Airlines announced it is suing its onboad Wi-Fi provider, Gogo, because the service it offers is too slow. In this new frontier speed is of the essence. Meanwhile Lufthansa is to trial a service that allows flyers to connect to their 4G networks on their devices. If successful the technology will likely be taken up by other European carriers in 2017. Another system being developed jointly by Inmarsat, a satellite-maker that is also involved in the Lufthansa trial, and Deutsche Telekom, will allow phones to link to ground masts when at low altitude and to satellites when not.

All of which means that, whether over Wi-Fi or a 4G network, the air will soon be abuzz with people making and receiving calls. Ignoring e-mails will no longer be excused just because you are 30,000 feet above the ocean. And Instagram will be even more awash with pictures of passengers’ tepid airline food.

Many will see that as a great step forward. Others will lament that one of the last refuges from the tyranny of constant connection will have gone. That suggests a market opportunity. Some posh spas now offer to block mobile signals, ensuring that high-rolling guests who lack the willpower to use an off-switch get a chance at seclusion. Might, in the future, a far-sighted airline do the same? Call it Isolation Air, the internet- and chatter-free carrier. Then again, perhaps not: it would no doubt be impossible for business travellers to convince their firms of the benefit of severing ties with the office. Maybe at the very least, one of the less sadistic airlines will offer to turn off the signal when the lights are dimmed and passengers are trying to sleep. That doesn’t seem too much to ask.

Air passengers are being getting online 2016-02-23
souvik