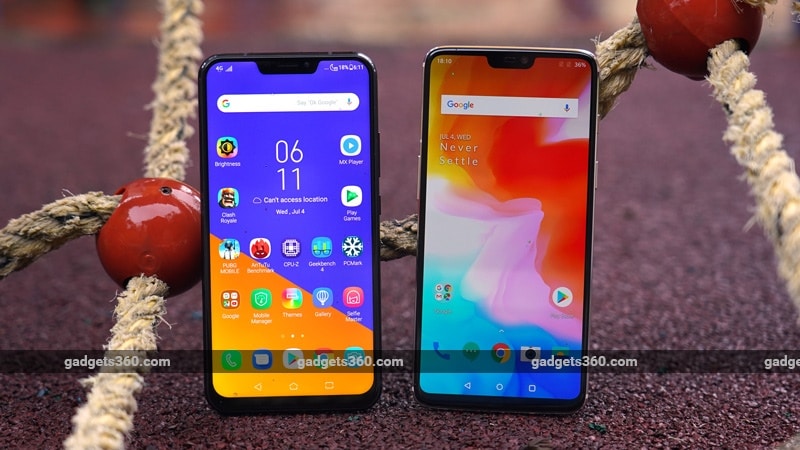 Is there more to the Asus ZenFone 5Z (left) than a lower price tag than the OnePlus 6? We find out

Up until now, the OnePlus 6 (Review) has been enjoying unfettered success in the market, simply because it’s the most powerful Android phone at its price point. Add to that the great build quality and a capable set of cameras, and you have yourself a well-rounded flagship that doesn’t cost a whole lot. There have been challengers in form the Honor 10 (Review) and the Vivo X21 (Review), but none have managed overthrow the OnePlus 6 in terms of value for money. However, that might be about to change.

Asus set a precedent with the low pricing of the ZenFone Max Pro M1 (Review) earlier this year, and now with its flagship ZenFone 5Z (Review), the Taiwanese company has managed to upstage OnePlus with an incredibly aggressive price. The ZenFone 5Z starts at Rs. 29,999, which is Rs. 5,000 less than the OnePlus 6, for the exact same amount of RAM and storage.

Lower pricing alone won’t necessarily make this a better pick, which is why we’ll be comparing all the main features of the Asus ZenFone 5Z and OnePlus 6 to find out if we have definite winner.

Design and aesthetics are very subjective matters, and in our opinion, both phones score well thanks to their metal and glass bodies. They feel premium, and at the same time are also big fingerprint magnets. We found the button placement on the OnePlus 6 to be more ergonomic, as the volume rocker is on the opposite side of the power button, which makes it easier to use with one hand. It also has a clear lead in the weather resistance department as it is designed to survive light splashes of water, whereas the ZenFone 5Z lacks any type of moisture protection.

The OnePlus 6 sports a physical slider for switching between different ringing profiles, which is very convienent. However, the base model is only available in one colour, which is Mirror Black. If you want any other colours like the Silk White, Midnight Black, or the new Red Edition, you’ll have to get the 128GB version, which is about Rs. 5,000 more. The ZenFone 5Z on the other hand is available in Meteor Silver and Midnight Blue options across all variants.

If we were to pick a winner then we’d go with the ZenFone 5Z for a couple of good reasons. It’s noticeably lighter than the OnePlus 6, so you don’t feel as much fatigue in your hands even after holding it for long durations. This is handy if you tend to read or play games a lot. It’s also a tiny bit shorter than the OnePlus 6, which makes it feel a bit more compact to hold. 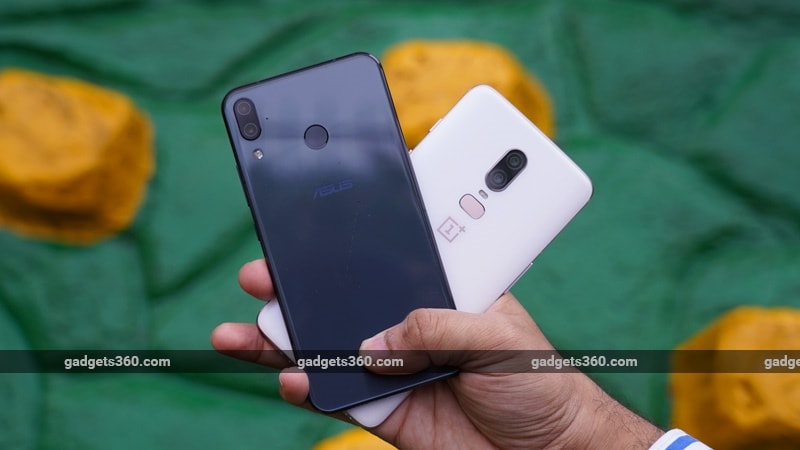 One of the main reasons the Honor 10 and the Vivo X21 didn’t quite match up to the calibre of the OnePlus 6 is the powerful and efficient Qualcomm Snapdragon 845 SoC that has so far been exclusive to the latter (in this price bracket). This changes with the ZenFone 5Z, as it also sports the exact same flagship SoC, which puts both phones on an equal footing. The OnePlus 6 still manages slightly higher scores in some benchmarks such as AnTuTu, but with actual usage, it’s next to impossible to actually detect any difference between the two.

The base variants of both phones have 6GB of RAM and 64GB of storage, but with the OnePlus 6, you get 8GB of RAM if you pick the 128GB model. Both phones also have an 8GB RAM and 256GB storage variant, but with a massive difference in pricing. Asus offers this top-end spec for Rs. 36,999 whereas OnePlus has priced it at Rs. 43,999.

Despite the glass back, neither phone supports wireless charging, which is not exactly a dealbreaker at this price. You get NFC, Bluetooth 5, UFS 2.1 storage, and dual-band Wi-Fi 802.11ac with 2×2 MIMO antennas along with the same assortment of sensors on both phones. The ZenFone 5Z also boasts of a colour temperature sensor, which is used to automatically adjust the tone of the display, and to get the right white balance when taking photos. The fingerprint sensors on both phones are easy to reach, but authentication is a quicker on the OnePlus 6. This applies to face recognition too, which works a tad faster on the OnePlus flagship.

The ZenFone 5Z also has stereo speakers, which the OnePlus 6 lacks. Now, granted, the earpiece doesn’t quite offer the same volume level and fidelity as the main speaker, but some semblance of a stereo effect is better than none at all. Finally, the ZenFone 5Z supports expandable storage with a hybrid dual-SIM slot, which is still something many look for when buying a phone.

Both phones have similarly sized 19:9 aspect ratio displays with the same full-HD+ resolution and a notch at the top. For what it’s worth, the corners of the display on the ZenFone 5Z are more rounded compared to those on the OnePlus 6. The panels on both phones are quite different though. OnePlus has used an AMOLED panel on the OnePlus 6, whereas the Asus ZenFone 5Z ships with an IPS LCD screen. Both offer very good viewing angles, saturated colours, and support for the wider DCI-P3 colour gamut. There really is a negligible amount of difference in quality between the two, even when looking at them side by side. The OnePlus 6 has slightly deeper blacks, which is one of the advantages of an AMOLED panel.

In terms of performance, both phones are great at multitasking and don’t have any heating issues even with stressful apps. The Snapdragon 845 chews through even the most graphically intensive games, and even newer ones like Asphalt 9: Legends ran just fine. Popular online multiplayer games such as PUBG, which is graphically demanding, had no trouble running at the highest settings. Both smartphones also have Dual 4G with Dual VoLTE support.

Unlike the OnePlus 6, the ZenFone 5Z ships with a headset in the box, and it’s a pretty good one at that. The ZenEar Pro high-res-certified headphones sound great, and the phone itself supports high-resolution audio playback along with DTS Headphone:X enhancement. You also get FM radio, which is missing in the OnePlus 6.

For software, the two companies have taken quite different approaches to their custom UIs. The OnePlus 6 runs on OxygenOS, which is based on Android 8.1 Oreo. You get some customisations in the form of gestures and a reading mode, which switches to a monochrome colour scheme, but overall, the interface has a minimalistic look which closely resembles stock Android.

ZenUI in the ZenFone 5Z is based on Android 8 Oreo and while it lacks the same minimalist look, it’s still very snappy. The company is banking on AI enhancements to help it stand out from the competition. While not all of the touted features actually use machine learning to work, we found many of the software enhancements in the ZenFone 5Z to be genuinely useful.

In terms of future updates, the OnePlus 6 seems better poised at getting Android P before the ZenFone 5. Google released the developer preview of Android P for the OnePlus 6 (among other phones) during Google I/O, so in all likely hood, it will be among the first third-party OEM smartphones to get the final version. Meanwhile, Asus hasn’t formally announced any plans for Android 8.1 or Android P yet. There’s no reason for it to not get Android P, the question is when.

Both phones offer the option to hide the notch, however OnePlus has a more polished solution whereas the ZenFone 5Z’s software ends up looking a bit crude

The OnePlus 6 and the Asus ZenFone 5Z will both typically last you an entire day on a single charge, and in our own battery tests, we managed to get similar runtimes from both phones. Fast charging is supported through each phone’s USB Type-C port. OnePlus uses its own Dash Charging technology while Asus sticks to Qualcomm’s QuickCharge 3.0. Both can top up a fully drained battery to roughly 50 percent in half-an-hour.

The OnePlus 6 has a good set of cameras, which we’ve found to rival those of more expensive flagships in our camera comparison. However, just like with the pricing, the ZenFone 5Z manages to edge out the OnePlus 6 in terms of photo quality as well. Despite its lower 12-megapixel resolution compared to the 16-megapixel resolution on the OnePlus 6, the ZenFone 5Z captures slightly better details and colours in landscape shots. 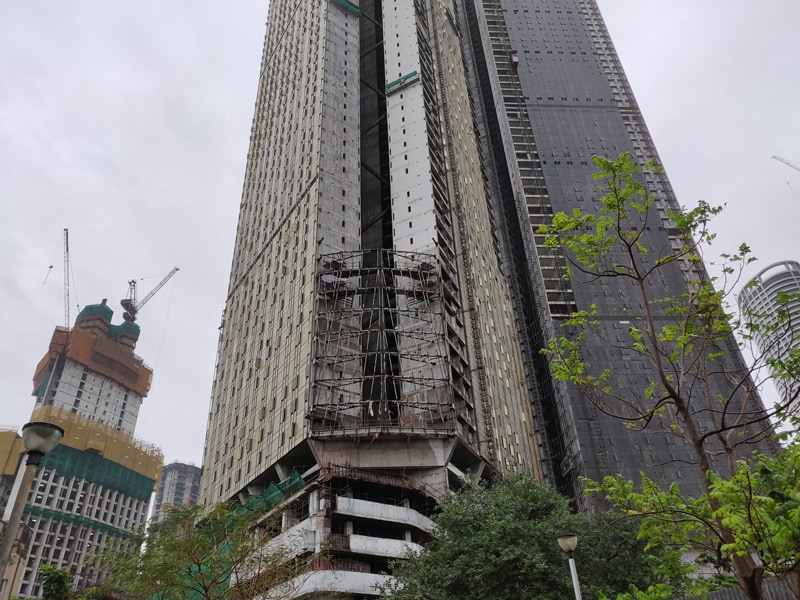 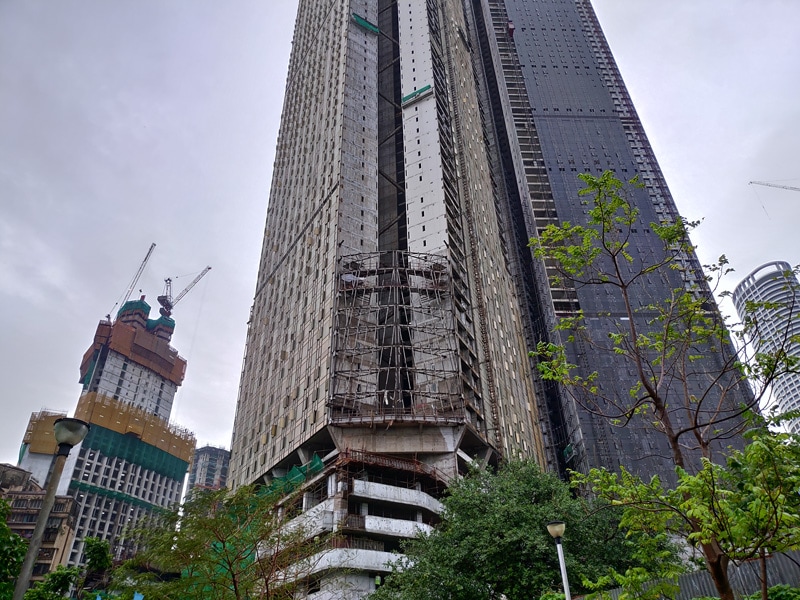 In macros, photos from the ZenFone 5Z appear to have sharper edges, less grain, and better detail. This could be attributed to the larger pixels of the ZenFone 5Z’s sensor. You get optical image stabilisation (OIS) with both phones too. 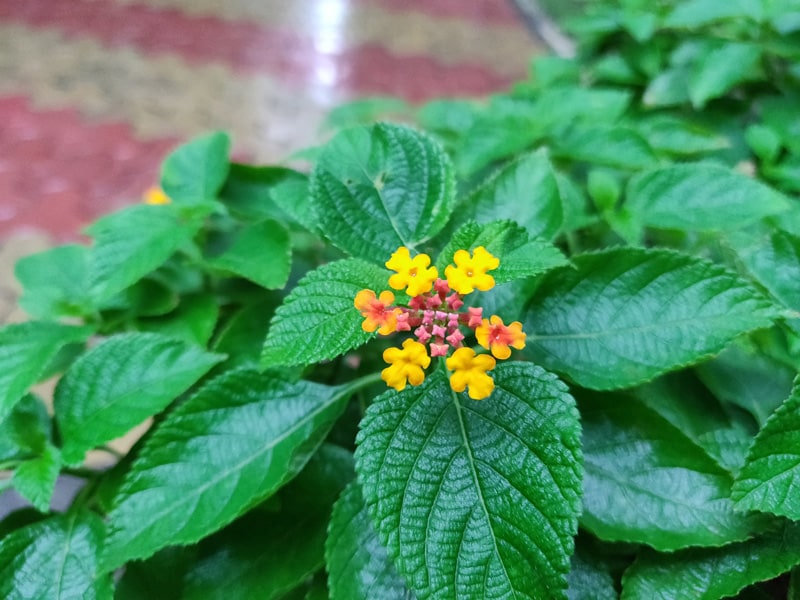 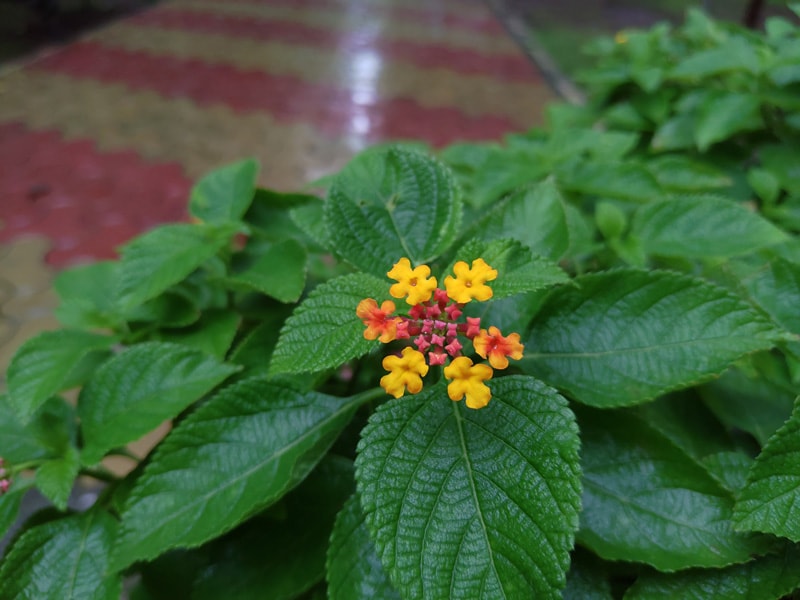 Indoors and in low light, the 5Z captures slightly brighter images. When shooting landscapes at night, the ZenFone 5Z once again did a slightly better job with white balance, although details in the shots taken by both phones were very similar. 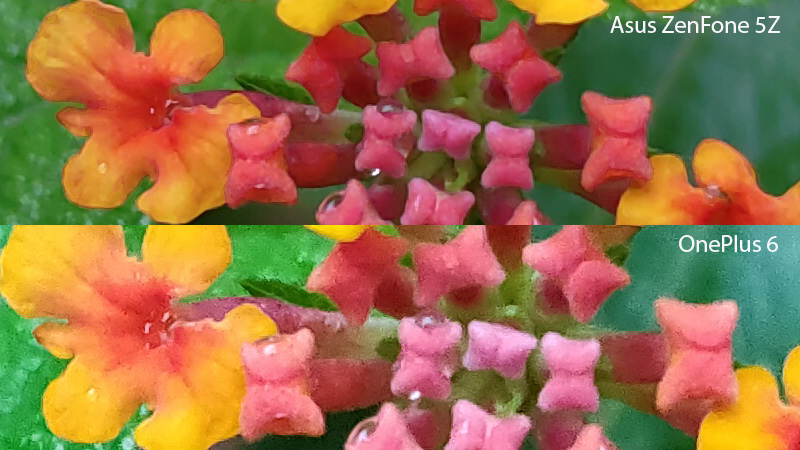 Both phones have secondary rear cameras, but the 8-megapixel one in the ZenFone 5Z is more useful, as it has a wide-angle lens, compared to the 20-megapixel sensor on the OnePlus 6 whose only use is calculating depth. There’s portrait mode on both phones, and in this case we found the OnePlus 6 to do a slightly better job with edge detection.

The 16-megapixel selfie camera on the OnePlus 6 is able to capture better detail thanks to its high resolution, which is especially useful in low light. However, the ZenFone 5Z does manage punchier colours, even in poor lighting.

The OnePlus 6 and the ZenFone 5Z support 4K video recording up to 60fps, as well as1080p 240fps for slow motion. Video quality is good under most lighting conditions and both phones do a decent job with electronic stabilisation even at 4K. The ZenFone 5Z has an advantage over the OnePlus 6 in that it doesn’t impose any time limit when recording 4K at 30 or 60fps, but it does get quite hot if you shoot for more than 8-10 minutes.

Verdict
Barring a few things like water resistance and perhaps the lack of the latest Android updates, the Asus ZenFone 5Z does everything that the OnePlus 6 does, and in some cases, does them better. It’s lighter, ships with a high-quality headset, has a useful set of AI features, and offers very good camera performance with a more useful secondary camera. The icing on top has got to be the price, which is Rs. 5,000 lower than that of the OnePlus 6. If you spring for the top-end varients in either case, you’d pay considerably less for the Asus option compared to what OnePlus charges. In terms of availability, Asus says that ZenFone 5Z will be available through an open sale on Flipkart, but then again, it said the same about the ZenFone Max Pro M1 (Review) too and we all know how that turned out.

It’s pretty obvious that the Asus ZenFone 5Z offers tremendous value at Rs. 30,000, and therefore it’s the one we’d recommend.

Will Asus Zenfone 5Z force OnePlus to slash the price of the OnePlus 6? We discussed that on Orbital, our weekly technology podcast, which you can subscribe to via Apple Podcasts or RSS, download the episode, or just hit the play button below.

Buy
Read detailed OnePlus 6 review
BUY AT
[“Source-gadgets.ndtv”]
5Z 6 Asus Buy One OnePlus Should vs which You ZenFone 2018-07-13
Loknath Das