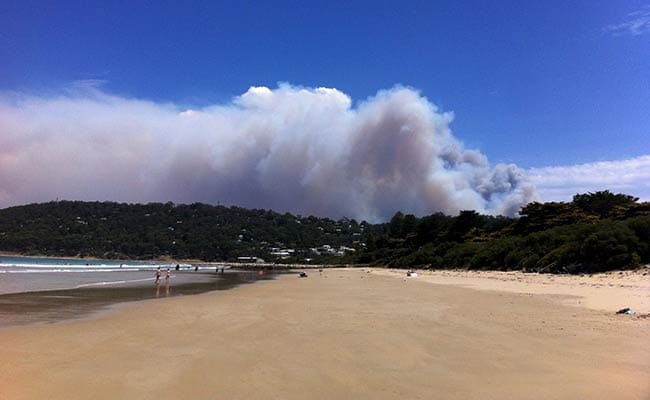 Smoke rises from a fast-moving bushfire near the Great Ocean Road in Victoria, Australia on December 25, 2015. (Reuters photo)

MELBOURNE:  Fire crews battled into the night on Friday after raging bushfires reduced at least 53 homes to ashes in a famous Australian beauty spot on Christmas Day, sending hundreds of residents fleeing for their lives. Water bombing aircraft made a minimal impact on the fires, officials said, as flames set entire trees and hillsides alight in communities along the Great Ocean Road, a major tourist attraction southwest of Melbourne.

To the sound of blaring sirens, hundreds of residents cut short their Christmas celebrations and fled to hastily organised evacuation centres as the normally packed route was closed.

Although no one had been confirmed dead as of Friday evening, one of Victoria state’s top fire officials said that at least 53 homes had been lost to the flames, while the fire remained out of control and the confirmed number of properties destroyed was expected to rise.

“There are a lot of areas we have not been able to get into,” Steve Warrington, deputy head of the Country Fire Authority, told the Australian Broadcasting Corporation as he detailed the losses. “This is a big fire now. It is in dense forest. It will cause us problems for quite some time now.”

More than 150 firefighters with eight aircraft and 60 fire trucks spent the holiday fighting the fires. The Great Ocean Road is one of Australia’s leading tourist draws, famous for its scenic landscapes and for the bizarre rock formations visible offshore in the Southern Ocean.

Victoria’s emergency services said at least 1,500 hectares (3,700 acres) had so far been burned. It is the latest of a series of bushfires to hit the state this year. Another fire on the outskirts of Melbourne earlier in the day was brought under control. Although a change in the weather was predicted, emergency services said the threat was likely to remain for some time.

In 2009, Victoria witnessed Australia’s worst ever bushfire disaster, which has since been dubbed ‘Black Saturday’. Weather conditions reminiscent of that period have been reported in the last few weeks, with fires not only in Victoria but in several other states.

Fire officials said Friday’s disaster was likely to be one of the worst to hit Victoria since 2009.