In an indication that the Chennai real estate market may have turned the corner, sales and launches of housing units attained the levels seen in mid-2015.

“Compared to the last two years, 2017 began on a positive note with sales and launches seeing a modest recovery,” said Kanchana Krishnan, director – Chennai, Knight and Frank, after releasing a research report titled, “India Real Estate – Residential and Office for the period January to June 2017”. Chennai was the only market that recorded a marginal increase in number of launches when compared to other cties including Mumbai, NCR, Kolkata and Hyderabad.

Chennai’s residential real estate market had faced a slowdown during the last few quarters owing to reasons including political uncertainty, demonetisation and the catastrophic floods.

“Developers who had held off project launches during the demonetisation drive brought out their inventory during the current period,” Ms. Krishnan said.

A significant chunk of new launches took place in the below ₹50 lakh range, indicating an emphasis on the affordable housing sector. In the first six months of 2016, this segment recorded an increase of 39% over the corresponding period in the previous year, while this year the increase was 69%.

The study indicated that the bulk of the residential development had taken place in relatively cheaper micro-markets such as parts of OMR, as developers have consciously taken steps to cater to the cost-conscious consumer looking to stay closer to the large office space concentration along the OMR and GST roads. 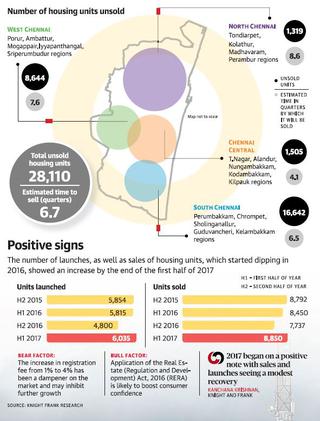 The unsold inventory, according to the report, had actually plummeted nearly 30% over the last two years to 28,110 units.

“It will take less than three years to offload this unsold inventory,” said Ms. Krishnan.

Restricted supply and falling unsold inventory had pulled down the inventory load on the market.

According to the report, the recent 33% reduction in guideline values across the State by the government, along with an increase in the registration fee from 1% to 4%, does increase the effective acquisition cost marginally for the home buyer.

However, measures such as the application of the Real Estate (Regulation and Development) Act, 2016, and the Pradhan Mantri Awas Yojana will go a long way in increasing consumer confidence by effectively regulating developers and increasing transparency in the real estate industry.

“This regulatory focus of the government will prove to be a strong buffer for market sentiment in the year ahead and should aid a more sustained recovery in Chennai’s real estate market fundamentals,” added Ms. Krishnan.