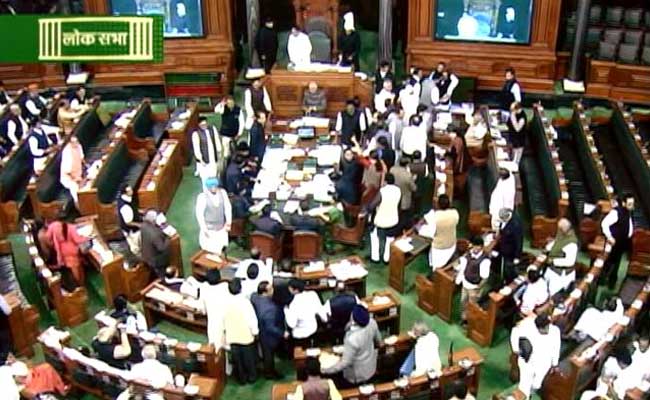 The Congress members refused to pay any heed to Speaker Sumitra Mahajan’s pleas and gathered in front of the Speaker’s podium, raising slogans.

NEW DELHI:  The Lok Sabha could not carry out any meaningful business during the Question Hour today, as the Congress members resumed their protest against the government soon after the house met for the day.

Speaker Sumitra Mahajan requested the agitated members to go back to their seats, promising to allow them to raise the matter during Zero Hour.

The Congress members, however, refused to pay any heed to her pleas and gathered in front of the Speaker’s podium, raising slogans.

This has been a regular practice with them ever since the Delhi High Court on December 7 rejected the plea of the Congress top leadership not to appear before a court in the National Herald newspaper case.

The Congress has accused the central government of carrying out a political vendetta against it.

Issues like Kerala Chief Minister Oommen Chandy not being allowed to attend a function in his state where Prime Minister Narendra Modi was present, CBI raids in Delhi Secretariat and political developments in Arunachal Pradesh where the Congress has accused the BJP of “killing democracy” and raised questions about the governor’s role, saying he interferes in the state government’s internal matters, provided the party enough reasons to question the government in the Lok Sabha on a daily basis.

The Congress members staged a walkout at the end of the Question Hour when the agitated treasury benches did allow Leader of Congress in the Lok Sabha Mallikarjun Kharge to speak.

The ruling Bharatiya Janata Party members, however, questioned how the Congress members could be allowed to present their point of view peacefully when they don’t allow any business during Question Hour.