Denmark Wants To Seize Jewelry And Cash From Refugees 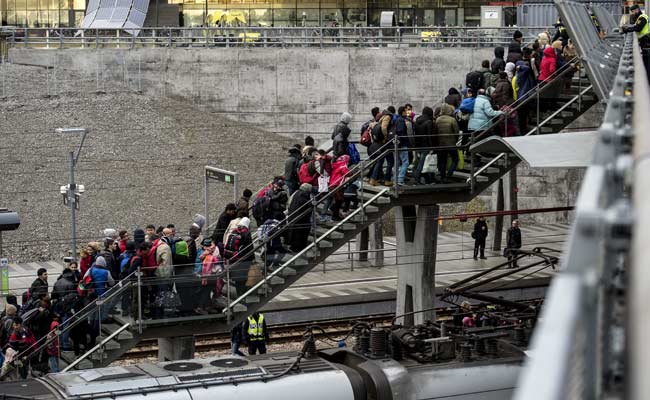 Police organize the line of refugees at on the stairway leading up from the trains arriving from Denmark at the Hyllie train station outside Malmo, Sweden, on November 19, 2015. (Reuters)

In recent months, Denmark has taken a fairly harsh stance toward refugees. In September, for example, authorities published an ad in Lebanese newspapers carrying an unmistakable message to foreigners who might think about seeking asylum: Don’t come to Denmark.

Now, the country is debating another and even more extreme step: The government is considering a law that would allow authorities to confiscate jewelry from refugees entering the country. The proposal is almost certain to pass parliament.

“It is pretty telling about the current Danish policies that [some] are not quite sure whether this is a hoax or not,” said Zachary Whyte, an asylum and integration researcher at the University of Copenhagen. In this case, it’s real.

“The bill presented on 10 December 2015 provides the Danish authorities with the power to search clothes and luggage of asylum seekers – and other migrants without a permit to stay in Denmark – with a view to finding assets which may cover the expenses,” Mia Tang, the press spokesperson for the Danish ministry of integration, said in an email to The Washington Post.

The law would also impact refugees already in the country. It is included in an asylum policy bill which is expected to pass Parliament in January and would be set to take effect by next February. Police authorities would be allowed to seize valuables and cash amounts they deem expensive enough. According to the integration ministry, “the new rule on seizure will only apply to assets of a considerable value.” Foreigners are expected to be able to “keep assets which are necessary to maintain a modest standard of living, e.g. watches and mobile phones.

Furthermore, assets which have a certain personal, sentimental value to a foreigner will not, as a main rule, be seized unless they have [considerable] value.”

There were discrepancies in how the two main political parties are interpreting the proposed law. “Absurdly, the minister of justice initially explained the law on television by saying that it would apply to a hypothetical asylum seeker arriving with a suitcase full of diamonds. This prompted the Danish People’s Party to point out that items of smaller value should also be impounded,” Whyte said.

He thinks there is no need for the law. “Asylum seekers generally do not arrive in Denmark with large amounts of cash and jewelry,” he said.

The proposal “has been branded petty and cruel, and some opponents have asked whether the government would also be taking out asylum seekers’ gold fillings,” Whyte said. The idea of seizing jewelry from people who are fleeing has a particularly bitter connotation in Europe, where the Nazis confiscated large amounts of gold and other valuables from Jews and others.

The Danish integration ministry emphasized, however, that current rules already required refugees with sufficient financial means to pay for their stay themselves. Although the seized valuables are supposed to pay for refugee-related expenditures, the financial impact could be of less consequence.

Experts say the Danish government is more interested in sending a message.

However, [too many refugees] put pressure on the Danish society and make it more difficult to ensure a successful integration of those who come to Denmark.”

“Refugees who have been granted a residence permit can make full use of the free Danish school, education (including tertiary education) and health system on the same level as everyone else in Denmark,” said Tang. Denmark also provides integration schemes which run up to three years and include language as well as job training, for instance. “The aim of the Danish integration effort is to support refugees in order for them to become participating and financially independent citizens,” Tang emphasized.

However, critics say that Denmark has tried hard to portray itself as a destination few refugees would want to go to. Recently, the Danish government cut social benefits for refugees by up to 50 percent. Even after neighboring Sweden recently increased restrictions because it had been overwhelmed by the refugee influx, Denmark was quick to emphasize that its policies still remained far more restrictive, researcher Whyte said. “This is in line with a general Danish asylum policy of trying to maintain and communicate a less welcoming position to refugees than its neighboring countries,” Whyte explained.