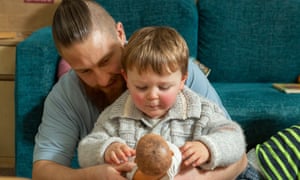 A drive is under way to increase the number of men working with the youngest children in the education system, drawing on the success of Norway, which has the highest percentage of male early years professionals in the world.

According to latest statistics, just 2% of the early years education (EYE) workforce in the UK is male, a figure that has remained static for decades despite previous targets and greater shared childcare between men and women in the home.

Researchers from Lancaster University and the Fatherhood Institute have launched a two-year study to try to understand the obstacles preventing more men from joining the EYE workforce and identify possible solutions to improve gender diversity in early years settings.

They went on a fact-finding mission to Norway, where 10% of the early years workforce is male and there is a target to reach 20% as part of a national gender equality action plan.

“There’s a growing sense that the UK needs to rethink its approach on this,” said Dr Jeremy Davies of the Fatherhood Institute. “The lack of gender diversity in our EYE workforce has been allowed to go unchecked for too long. We hope that by focusing on what’s worked in Norway, we can develop some clear, achievable strategies for accelerating the pace of progress.”

Back in 2001-02, there was a target to have 6% men in EYE workforce by 2004, but it was never achieved. This latest project does not set targets, but researchers will work with hubs of EYE professionals in four locations in England who share an interest in advocating an increase of men in EYE in order to try to move things forward.

Funded by the Economic and Social Research Council, the project will focus on best practice in recruitment, support and retention of EYE workers. Researchers will also conduct a sector-wide survey to gather fresh data. “The study will provide a much needed evidence base for understanding what men’s contribution is and could be” said the lead researcher, Dr Jo Warin.

According to Warin, of Lancaster University, 2% male participation in EYE is a global average. Norway is an outlier, while Turkey has also made progress with men making up more than 5% of the EY workforce.

“Here, from previous research I’ve done, it’s seen as women’s work,” said Warin. “We know that it’s not well rewarded financially. We also know that a lot of men just don’t think of it. It’s not on their horizons.”

Asked why it’s so important to shift the gender balance in the workforce, she said: “We want young boys and girls to become familiar with men in caring roles so that they grow up to think that care is not just something women do. And it’s good for men too.”

During their stay in Norway the research team visited Granåsen kindergarten in Trondheim where, unusually even for Norway, 50% of the workforce is male. A lot of the focus was on outdoor play, but male and female members of the team did exactly the same jobs. Cooking, reading and intimate care were performed equally by men and women, as was outdoor play.

“In Norway we saw men and women doing exactly the same thing,” said Warin. “Sometimes here there’s a rationale for having men as models of masculinity in nurseries – you get them to do the rough and tumble of risky play. There’s still a sense that some things are appropriate for men and some for women.

“There’s a danger that we then just reproduce the traditional gender division of labour we see in many families. But we are after boys and girls doing the same jobs. That was what was striking in Norway. To me it was wonderful to see children being looked after equally by men and women.

“In the longer term the hope is that if young children see men in public roles as carers and teachers of young children, they will grow up thinking that’s a normal job for boys to do.”