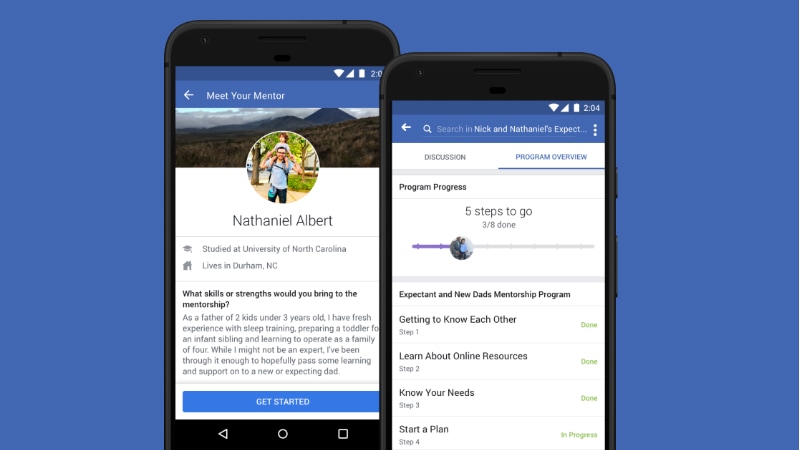 After launching AR games in Messenger video chats, Facebook has now decided to brings its mentorship feature to Groups as well. The mentorship feature was launched last year by Facebook, and introducing it to Groups will now allows users in existing communities to connect with mentors and get one-on-one support through a guided programme. The social giant also posted a message on its app stating that it has shut down its Friend List Feeds in order to improve its main News Feed experience.

Starting with the Mentorship program for Groups, two members in one group can help each other to learn a skill or task. A mentor and a mentee can bond on Facebook to learn different skill sets. Facebook details that, with the help of the mentorship feature, two mothers in the Mama Dragons group are helping each other navigate the journey of raising a transgender child, while woman from the Soap-making and Business Coaching group paired up with a mentor to learn soap making.

Facebook notes that the mentorship feature is available only in select groups that are focused on parenting, as well as professional and personal development. For this to work, group admins need to create a mentorship program using the template that is provided. This could be based on career advancement, skill development, or encouragement and support. Then group members need to sign up as mentors or mentees, and the admin will pair people up and introduce them. The duo then needs to go through program steps in their one-on-one mentorship program, and use Messenger for chatting as well.

“Mentorship is built with privacy and safety in mind. All communications between a mentor and mentee is visible only to the pair. People can report issues to Facebook, and they have access to the same reporting and blocking features available elsewhere on Facebook. Mentorship is only available to people 18 years and older,” Facebook notes on its blog.

Separately, TechCrunch reports – citing a notification in the Facebook app – that the Friend List Feeds, which allowed users to see posts from only friends and cut out the other spam posts, has shut down. Facebook shows a pop-up in its app alerting the user that this feed will no longer exist after August 9, and notes that even though the feed option is going away, users can still create, edit, and share to their friends list.

For all those unaware, Facebook has an option called ‘Feeds’ in the app that lets you see feeds from select people, based on the lists you create. Earlier, these lists had to be created manually, but later Facebook started to create smart lists to reduce the labour work.