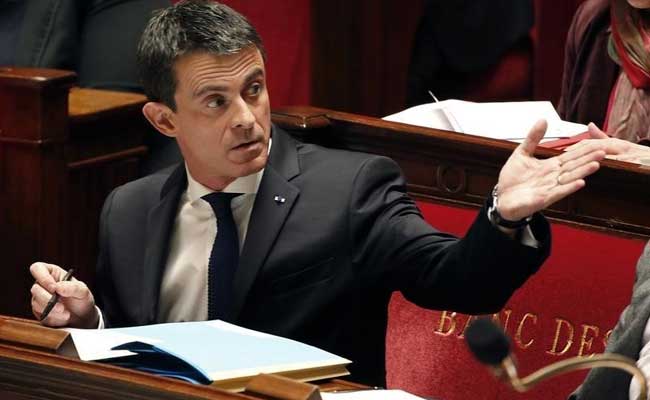 French Prime Minister Manuel Valls defended the measure saying that it would be strictly limited to people convicted on terrorism charges and would be used after they had served out their sentence. (Reuters Photo)

PARIS:  The French government will go ahead with contested plans to strip dual citizens of their French nationality in terrorism cases, Prime Minister Manuel Valls said today, brushing aside his own justice minister’s concerns.

The decision was met with fierce criticism from left-wing allies of the Socialist government. There were also calls from the right for Justice Minister Christiane Taubira to resign as she had publicly opposed the measure.

After Islamist gunmen and suicide bombers killed 130 people in November 13 attacks in Paris, President Francois Hollande called for the measure as part of a constitutional amendment aimed at stepping up the fight against terrorism.

Taubira had said on Tuesday that it had been dropped from the amendment bill and that it posted fundamental problems regarding the right to French citizenship based on birthplace.

Unveiling the bill on Wednesday, Valls defended the measure saying that it would be strictly limited to people convicted on terrorism charges and would be used after they had served out their sentence.

Speaking at the same news conference as Valls, Taubira squashed speculation that she would resign: “In the current state of things, my presence or absence from government is not what matters, it’s the president’s and the government’s capacity to deal with the dangers facing us.”

Currently only naturalised citizens can be stripped of their French citizenship. Extending the measure to all dual nationals has divided politicians on both the left and right.

Conservative lawmaker Eric Ciotti led calls on the right for Taubira to resign, saying that the government’s credibility and coherence was on the line.

France’s highest administrative court, the Conseil d’Etat, has given a lukewarm backing for the plan and the government appointed rights watchdog came out against.

“It clearly means that there will be two classes of nationality and two classes of citizenship, that’s why I say it raises fundamental questions,” Jacques Toubon said on France Inter radio.

A constitutional amendment requires a three-fifths majority of the Congress of both houses or a referendum vote.