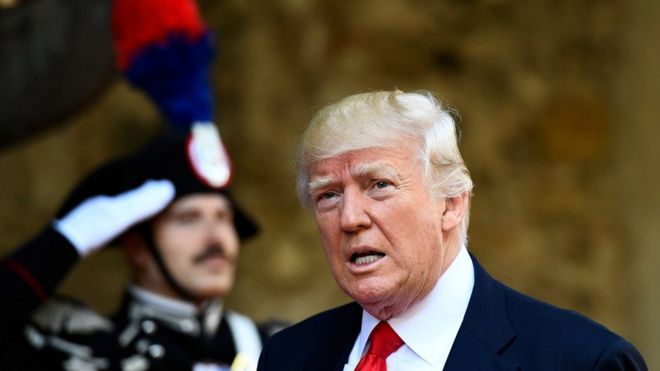 Leaders of the G7 group of rich nations have failed to agree a statement on climate change.

Six world leaders reaffirmed their commitment to the Paris accord, the world’s first comprehensive deal aimed at reducing greenhouse emissions.

However, the US has refused to recommit to the agreement, saying it will make a decision next week.

Mr Trump, who once dismissed global warming as a “hoax”, has previously threatened to pull out of the accord.

This is Mr Trump’s first G7 summit – during his first foreign trip.

G7 leaders from the US, Britain, Canada, France, Germany, Italy and Japan have agreed a statement on fighting terrorism.

Why is there no deal on climate change?

The final communique issued at the G7 summit in Italy said the US “is in the process of reviewing its policies on climate change and on the Paris Agreement and thus is not in a position to join the consensus on these topics”.

However, the other G7 leaders pledged to “reaffirm their strong commitment to swiftly implement the Paris Agreement”.

German Chancellor Angela Merkel said the discussion on climate change had been “very unsatisfactory”, adding “we have a situation of six against one”.

Mr Trump tweeted: “I will make my final decision on the Paris Accord next week!”

His economic adviser, Gary Cohn, said Mr Trump “came here to learn. He came here to get smart. His views are evolving… exactly as they should be.”

UN Secretary General Antonio Guterres, who is also in Sicily for the meeting, told the BBC earlier that the accord would survive regardless of Mr Trump’s position.

There is a new fault line within the G7. An informal G6 (Canada, Japan, the UK, France, Germany, Italy) faces an informal G1 – the US.

The drafters of the summit’s final communique had no way of hiding the division which exists on climate change.

The statement noted simply that six countries remained committed to the Paris agreement while the US was in the process of evaluating its participation.

In his closing news conference, Italy’s Prime Minister Paolo Gentiloni was unable to hide his disappointment with the lack of agreement. On this subject, the G1 acts alone.

The G7 has been a champion of free trade since its inception.

The leaders’ last summit in Japan last year stressed the need to avoid protectionism. But this was before the election of Donald Trump and his campaign slogan of “America First”.

German weekly Der Spiegel quoted Mr Trump as saying in a meeting with European Commission President Jean-Claude Juncker on Thursday that Germans were “very bad” regarding car exports to the US.

However, all G7 leaders agreed to back the final communique which pledged to “fight protectionism”, while acknowledging that “trade has not always worked to the benefit of everyone”.

Leaders from Tunisia, Kenya, Ethiopia, Niger and Nigeria took part in the discussions in Sicilian town Taormina earlier on Saturday.

Italy is keen to encourage the world’s wealthiest nations to support African countries in developing their economies, so fewer young people will feel forced to make the dangerous journey to Europe.

However, a diplomat told Reuters that other Italian proposals – which looked to highlight the benefits of migration and promote a major initiative on food security – were dismissed ahead of the summit.

According to the source, Mr Trump’s administration was unwilling to highlight benefits of human mobility, Reuters reported.

A statement originally intended to be separate and run into several pages has now been condensed to two paragraphs.

So far this year, more than 1,500 migrants are thought to have drowned in the Mediterranean.

How has Mr Trump’s trip gone?

Mr Trump described his first foreign trip as “a truly historic week for our country” and said he was “more hopeful than ever that nations of many faiths… can join together in common cause” in fighting terrorism.

He is now returning to the US, where his approval ratings are low.

US media have already been casting judgement:

Headlines in the US continue to be dominated by alleged Russian meddling in November’s election, and there are whisperings of discontent within his own party over policy decisions.

Where else has Trump been this week?

Making his first foreign trip as president, he came to Sicily from Brussels where he had held talks with EU and Nato leaders.

At Nato headquarters, he complained that many Nato member states were not spending enough on defence, expecting the US to bear the burden.

Before that, he visited Pope Francis in Rome and toured the Middle East – first Saudi Arabia, then Israel and the Palestinian territories.