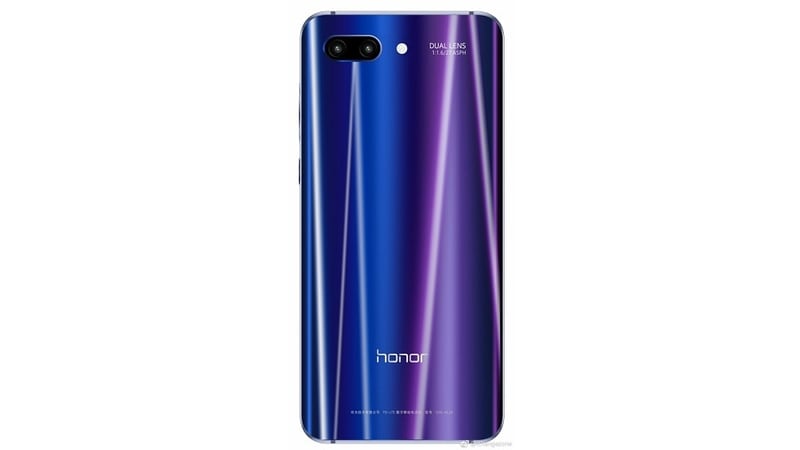 Honor 10, the Huawei brand’s next flagship, is expected to launch at an event on April 19 in China. The latest render of the smartphone’s back panel has been leaked online and it suggests that the phone will get a horizontal dual rear camera setup with f/1.6 aperture, a quad-LED flash, and the company’s new Twilight colour variant seen recently on the Huawei P20 and P20 Pro. Press invites for the April 19 have been sent out, as have invites for a separate event on May 15 in London. The handset is rumoured to make an official appearance in China this month followed by a global unveiling next month.

This new image render leaked on Weibo, and spotted by GSMArena, is said to be of the upcoming Honor 10. Apart from the above-mentioned camera features, it shows standard Honor branding on the bottom as well as antenna lines on the top and bottom. Previously, invites and banners of the Honor 10 have teased certain AI-based features in the selfie camera. Interestingly, one such banner had revealed a rear-mounted fingerprint sensor on the phone, which is not to be seen in the latest image. Design details might get clearer closer to the launch date.

Talking about Honor 10’s specifications, the upcoming flagship is suggested to sport a 5.8-inch full-HD+ (1080×2160 pixels) display, and be powered by an in-house Kirin 970 SoC – paired with up to 6GB of RAM and up to 256GB of inbuilt storage. Apart from that, the phone might bear a dual 12-megapixel + 20-megapixel rear camera module, similar to the one last seen on the Huawei P20. The launch date is when we can expect to see an update on pricing and availability details based on different regions.