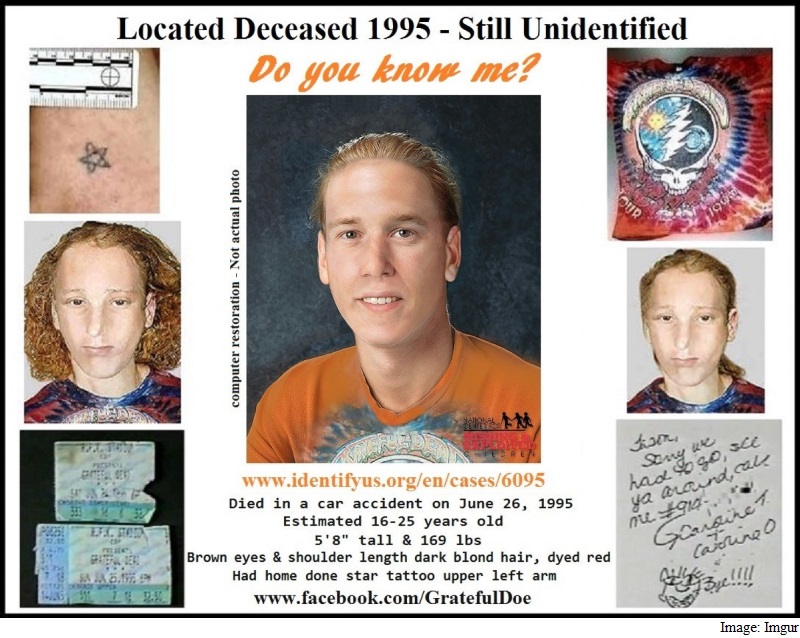 Twenty years after the van he was in ran off the road in Northern Virginia, and 10 years after the Internet started trying to close his case, the man known only as “Grateful Doe” finally has a name.

On Wednesday, WMBF-TV reports, both the Virginia Medical Examiner’s office and the National Missing and Unidentified Persons System confirmed that Grateful Doe is 19-year-old Jason Callahan – the man first identified by sleuths on Reddit and Facebook almost a year ago.

Callahan, originally from South Carolina, had been hitch-hiking up the East Coast following the Grateful Dead’s ’95 tour when the car he was traveling in was involved in a fatal car accident in Emporia, Virginia. The driver of the car, a 21-year-old man, was immediately identified by his family. But no one knew who the man’s passenger was, and his injuries made it difficult to describe or sketch him accurately.

To make matters worse, the so-called Grateful Doe didn’t match any missing persons report. Because she was unsure when and where her son had actually gone missing since leaving home, Callahan’s mother, Margaretta Evans, never filed a report.

“It just broke my heart,” said Lauren Rutley, who helped publicize Doe’s case online. “That he was so young, and no one had reported him missing at the time.”

Rutley was one of dozens of volunteers and amateur detectives who worked on Grateful Doe’s case over a period of nearly 10 years. Users on Websleuths, a forum popular with cold-case and true-crime fanatics, had been cross-referencing Grateful Doe’s case against hundreds of entries in the missing persons’ database since July 2005. The search only heated up last December, however, when Reddittook on the case.

That month, an Australian woman with the handle greymetal opened a Grateful Doe subreddit andposted his picture to Imgur. She and other volunteers circulated the image widely, particularly within Grateful Dead fan communities; they also posted it to places like r/washingtondc and Buzzfeed.

More than half a million people saw the photo- and things began happening quickly. In early January, two men came forward claiming to have known Doe, whose first name was Jason and who was from Myrtle Beach. South Carolina. Greymetal, Rutley and a ragtag band of other volunteers, many of them now organizing on Facebook, began blitzing local newspapers and TV stations with the story, hoping they’d report on it. The story got wide play in Myrtle Beach, which is where Evans was when she heard about it on Jan. 13.

She filed a missing person’s report for Callahan the next day, and police immediately opened an investigation. It took 11 months to run Doe’s DNA.

“THE NEWS WE HAVE BEEN WAITING FOR!!!!” Two volunteers posted on Facebook Wednesday. “(I’ve) been sitting here for how long in shock both for the sadness of his family and the fact that here on Facebook we are making a difference. Because of everyone here this man will finally make his way home!!!”

Evans did not immediately respond to a message from a Washington Post reporter; a volunteer who claims to be in contact with the family wrote on Facebook that “she is hurting more than anyone ever should.”

Since social media found Evans’ son 11 months ago, however, she herself has become active in the online sleuthing movement. On Facebook, she constantly posts images of abused dogs and missing children.