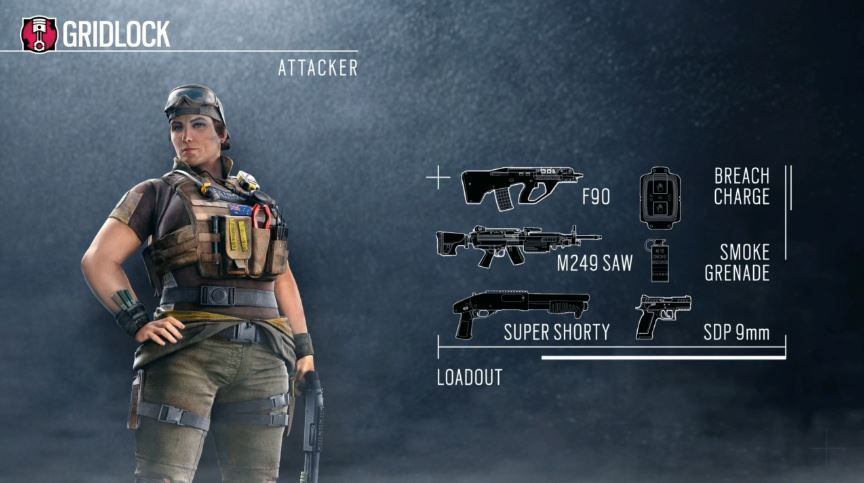 Ubisoft has detailed exactly how Rainbow Six Siege’s next two operators—Gridlock and Mozzie—will use their gadgets to mix up the meta when Operation Burnt Horizon launches at the start of Year 4.

Gridlock is a three armour attacker who carries Trax Stingers. These stingers, when thrown, will create a growing cluster of spike traps designed to slow down defenders or flush them out of entrenched positions. In addition to a slowing effect, the traps deal 10 damage and create noise. She carries the new F90 assault gun or the M249 SAW LMG as her primary, plus a Super Shorty shotgun as a secondary.

Jäger’s ADS gadget won’t affect the Stingers, but attackers can destroy them with bullets, explosives or melee attacks. If you shoot a Stinger soon after it hits the ground, you’ll reduce the number of traps it can spawn.

Mozzie is a defender that’s all about taking over enemy drones. He has a Pest Launcher, and the Pests it fires can hack into attacker drones, giving you control over them. You can either fire a Pest directly onto a drone or place it somewhere hidden and hope an enemy drone passes by, at which point the Pest will latch on. Attackers will be warned it there is a Pest nearby when they’re controlling their drones.

You can gain control of multiple attacker drones, which should help you gather lots of intel. You can also hijack Twitch’s shock drones. Dokkaebi can re-hack a Mozzie drone to access the video feed, but you won’t get control of the drone back. Instead, you’ll have to destroy drones that Mozzie has hijacked, which will be shown by a blue light on top. Alternatively, IQ will also be able to tell which drones are hacked.

Mozzie’s primaries are the P10 Roni automatic pistol and the Commando 9 assault rifle.

I like how Ubisoft has mixed up the formula, giving a defensive gadget to an attacker, and giving us a defender that’s all about drones, which is usually the realm of the attacking team. They’ll be live on test servers tomorrow, and you can watch footage of them in action in the video at the top of this article.