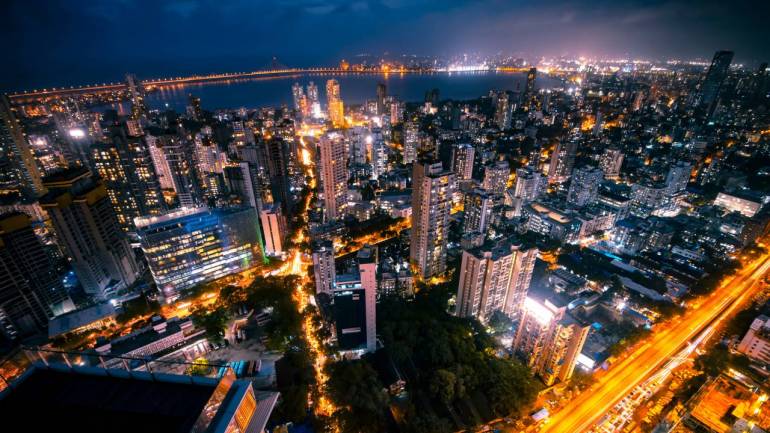 Traditional investment options rally around mutual funds, the stock markets and gold. The real estate sector, has, over time, yielded good returns over medium and long-term horizons, but with a large inventory overhang in the ready and near-ready segments, the portfolio is in a bind these days. Let us align ourselves to credible real estate investment opportunity, in a micro-market that will be the natural beneficiary of several mega infrastructural projects, and systematically geared for planned migration, growth, and business activity.

Traditionally, real estate bears the influence of both macroeconomic and microeconomic factors. While the predominant bias is to de-risk investments and go for RTMI (Ready-To-Move-In) inventory, or commercial units, Grade-A residential real estate in pre-launch stage, bolstered with the right product composition and infrastructural developments, will stay true to the core Indian bias towards property purchase. With a few remnant micro-markets that offer planned growth in terms of PPP commitments and space, such as Kharghar, it is inevitable that these micro-markets will create the resurgence in real estate consumption.

Infrastructure. The one defining factor towards appreciation and real estate absorption. Be it physical or social infra, this becomes the key for the overall economic growth for an entire micro-market or at times, even a region.  A few prominent examples.

1. Golf Course Road, Gurugram:
Gurugram has been the front-runner in the Indian real estate story. It has witnessed high growth due to Government policy, strategic location near the IGI Airport, proximity to NH8, and further supported by rapid industrialization starting in the early 80’s.

It has also been through rapid industrialization in the early 80’s, starting with collaboration of Suzuki Motors, Japan with Maruti Udyog Ltd. It is also home to mega corporates like Hero MotoCorp, Zomato, PayTm, Coca Cola, Ericsson, Sapient, Microsoft, Nestle, HP and many more such global names. In fact, an estimate states that it is home to more than 250 Fortune 500 companies.

Companies like DLF and Raheja have invested and developed several pockets with mixed-use credentials like the Golf Course Road. Close to the Cyber Hub and the Rapid Metro, this particular area has its own prominence when it comes to the overall livability quotient.
Let’s look at how this story unfolded. 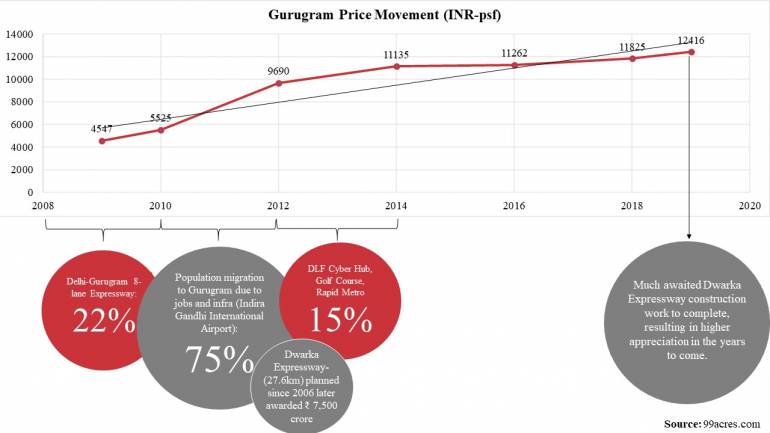 A series of booster doses in the form of infrastructure have been accounting for a steady, up-ward pointing trendline. A mammoth 75% increase in per sq. ft. prices occurred in a two-year period (2010-2012) in the micro market of Gurugram.

Located close to the posh Jubilee Hills, HiTEC City, also known as Cyberabad, is one of the most sought-after localities. Spread over 300 acres of land and envisaged towards developing 11 mn. sq. ft. of IT space and 4.5 mn. sq. ft. of residential space in a phased manner.
Integrated township with modern infrastructure and amenities, multiple housing colonies, shopping complexes, banks, cafeterias, etc. Strong impetus on modern infrastructure development by the State Government, with Metro and Monorail along with Five-star hotels, road connectivity and posh apartments.

Here’s how HiTEC City’s story has been so far: 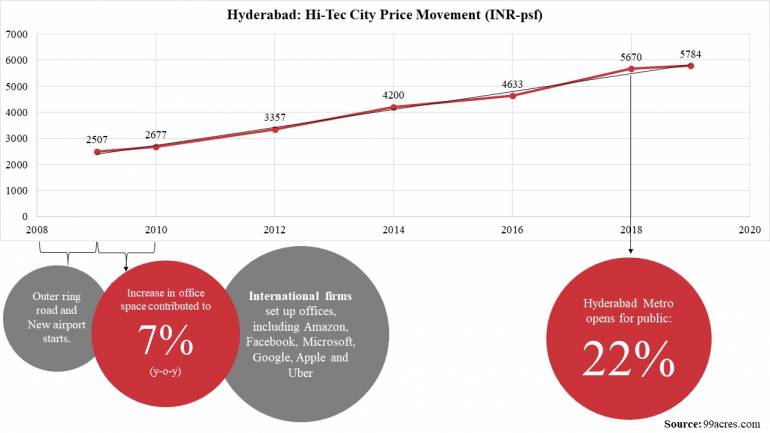 This is one of the regions which has witnessed a reverse brain drain, with people coming back from the Silicon Valley, owing to the fact that it is also home to some of the biggest global firms such as Google, Facebook, Microsoft, Deloitte to name a few.

The 147 sq. km. micro-market today has emerged as one of the established satellite cities for Mumbai. Development of physical, civic and social infrastructure has led to a major surge in demand for homes and real estate investments in Thane, and has offered high capital appreciation over the years. In fact, there had been an infusion of more than 90,000 residential units in the micro market in 2017.

It has so far, faired well as an option for many Mumbai-ites. 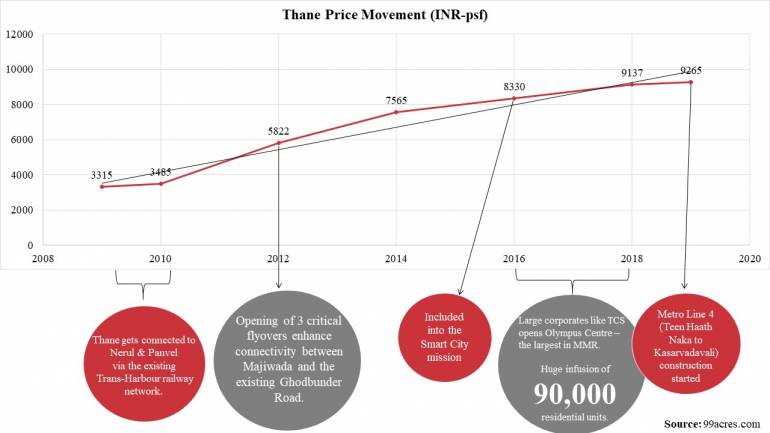 Kharghar, the Capital of Navi Mumbai, a planned mega-city offering a markedly superior lifestyle, is not surprisingly, ranked 2nd in ‘India’s Most Liveable Cities’ by the ‘Ministry of Housing & Urban Affairs’ in a 2018 report.

Bound by easy accessibility through highways and surrounded by picturesque hills, it is well connected through various modes of transport to all parts of the city. Various infrastructure projects predict steady and phenomenal appreciation and growth.

Kharghar is quickly emerging as a smart city amongst all the nodes of Navi Mumbai, primarily because of its strategic location. Flanked by two major highways and the Central Business District of Belapur, Kharghar is less than an hour’s driving distance from Mumbai even during peak hours. This makes it highly accessible to professionals and business persons from various parts of Mumbai. The advantage is further amplified with the coming of Navi Mumbai International Airport and the metro, creating a potent ecosystem.

Kharghar is located in close proximity to Mumbai and Pune. The land is available at attractive prices and the rentals are comparatively economical, hence many eminent real estate developers – commercial and residential alike – have made investments in Kharghar. CIDCO (The City and Industrial Development Corporation of Maharashtra Ltd), the government body that has developed Navi Mumbai, also plans to develop a corporate business park of 140 hectares at Kharghar, in the lines of Bandra Kurla Complex (BKC), Mumbai’s prime business district.

The growth story of Kharghar is nothing less than what some of the iconic locations have portrayed in the past, making Kharghar, probably the next biggest real estate story in India. 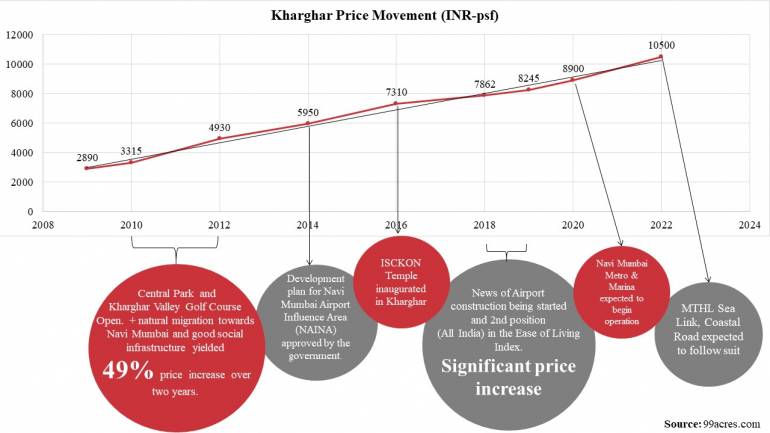 Of the lot we have, while Gurugram had tremendously bore the tag of frontrunner, it is now at the point of saturation wherein we are seeing areas of New Gurugram and some beyond the Sohna belt sprouting up, further expanding horizontally towards the west.

A similar trend is visible with Thane where most of its modern development had happened vertically, with it going further towards Bhiwandi, expanding into the industrial belts and MIDC area. Thane is, quite simply, saturated, with infrastructure realities catching up with the burgeoning population.
Hyderabad has some pockets like HiTEC City, Madhapur and Gachibowli showing steady growth in terms of price appreciation due to global corporates coming at these sites, including the Nanakramguda Financial District. However, it still has a long way to go, owing to the gradual price deltas it has been taking.

Kharghar, on the other hand, is usually positive and promising in terms of both, the price and the growth. Thanks to the mega infrastructural projects and the green and sustained surroundings of Kharghar, it has earned a positive outlook and a good liveability quotient for both – investors and end users to consider this micro market as one of the most potent real estate options.

Some of the projects that are being planned for the region are as follows: