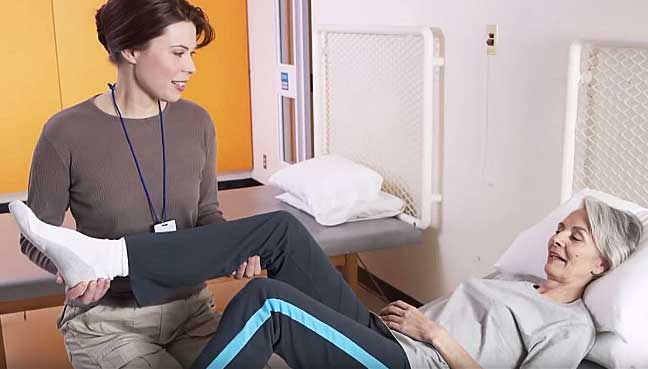 (Reuters Health) – Patients who live in low-income communities and lack a college education may have worse pain after knee replacement surgery than their more educated neighbors, a recent study suggests.

Two years after total knee replacement surgeries, patients in poor communities who hadn’t gone to college had average pain scores that were about 10 points worse than patients in the same neighborhood who had some college education, the study found.

In wealthy communities, however, the difference in pain scores with and without college was only 1 point.

“When we looked at the interaction with education, we found that some college education was protective,” Goodman said by email. “Even for those from poor communities, outcomes were far better for the educated.”

It’s possible that people without college education had delays in seeking treatment that contributed to worse pain and function before they even had surgery, Goodman said. A lack of college education might also contribute to lower levels of health literacy, making it harder for patients to understand and stick with complex medical regimens after surgery, including intensive rehabilitation exercises.

The study involved 3,790 patients who had total knee replacement surgeries, including 2,438 people with at least some college education. In addition to focusing on pain and disability after the operations, the researchers also looked at education levels for each patient as well as community-level income information based on records from the U.S. census.

Patients with no college in the study were about 68 years old on average compared to about 67 for people with at least some college. They were also more likely to be female, Hispanic, obese, and have at least one complex medical condition in addition to their knee issues.

Many patients without any college lived in poor neighborhoods and in communities where a college education was less common.

There wasn’t a meaningful association between pain levels and the overall level of education in the community, researchers reported in Arthritis Care and Research.

The study wasn’t a controlled experiment designed to prove whether or how education levels might influence the impact of poverty on knee surgery outcomes.

Another limitation of the study is that it included a relatively small proportion of patients from poor neighborhoods, which may have made it harder to detect meaningful differences in surgery outcomes that might have been apparent in a larger group.

“If the surgery is done in the earlier stage of the disease, the final result will be better,” Sveikata, who wasn’t involved in the study, said by email. “Sometimes patients come in very late stages of the disease with big deformities and very poor function. Then it’s impossible to achieve (an) excellent postoperative result.”

Even so, the results suggest that clinicians need to consider patients’ education levels when communicating with them about follow-up care, said Leigh Callahan, associate director of the Thurston Arthritis Research Center at the University of North Carolina in Chapel Hill.

“People should not be afraid to tell their physicians, nurses, physical therapists or any other providers that they are not being clear as to what they are to do when they are rehabilitating,” Callahan added.