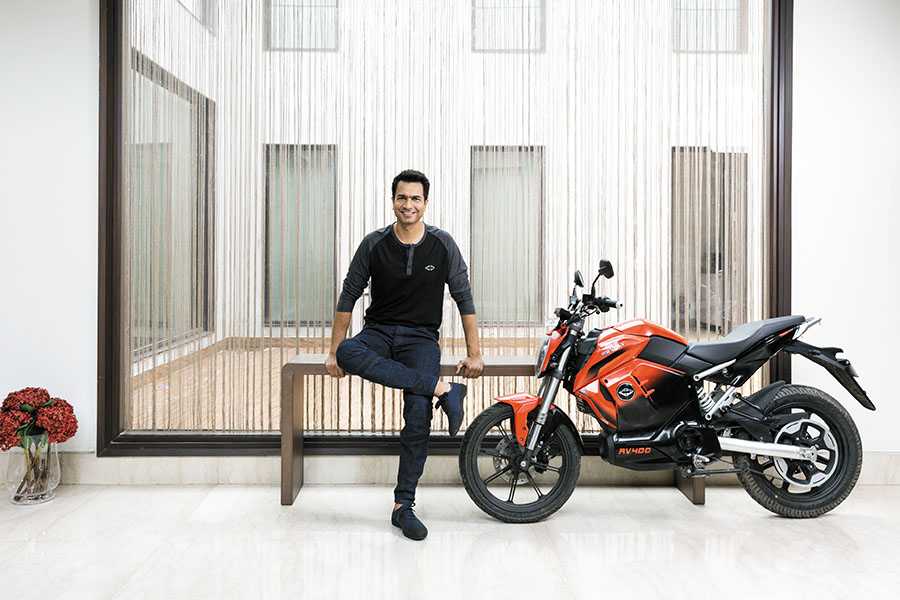 Rahul Sharma had many reasons to start making electric bikes. To begin with, there were the dwindling fortunes of his company Micromax Informatics, once India’s second-largest phone maker with a market share of over 20 percent in 2014; today it is a fringe player, with less than 2 percent market share. Then there is his manic obsession for embedded technology, which he nurtured since he was a teenager. The third, and perhaps more compelling, reason is that Sharma knows a business opportunity when he sees one. And with major auto makers from Mercedes and BMW to Maruti Suzuki scrambling to jump onto the electric mobility bandwagon, Sharma couldn’t hold back.

Yet, it was none of these that convinced him to throw his hat into the ring. It was fatherhood. “My wife and my 20-month-old child are mostly in Kochi, and they come to Delhi when the pollution levels are very low,” says Sharma, who flies every Friday to Kochi where his wife, actor Asin, stays. He returns by Monday. “The air is bad here, and as they say it’s like smoking 20 cigarettes a day. A major cause for that is vehicular pollution. And that’s where we want to make an impact with our new product.”

Sharma’s new company, Revolt Intellicorp, has introduced what it calls India’s first artificial intelligence (AI)-based electric bike. The RV400 was showcased in New Delhi on June 18, and will be on road before August 15. Sharma claims there were pre-bookings to the tune of one every 35 seconds on the day it was launched. The company is yet to announce the price of the bike, but it is expected to be around ₹1 lakh. Rivals such as Pune-based Tork Motors are yet to start taking orders for their electric bike.

“The RV400 is the first step towards providing sustainable, affordable mobility to every Indian home,” Sharma had said at the launch. The bike, he says, is manufactured at Revolt Intellicorp’s plant in Manesar (although sceptics insist it is imported from China and assembled in Manesar). It has a range of 156 km on a single charge and will operate through the Revolt App, which is available on Android and iOS. In addition, it will offer charging through regular 15 A socket in four hours, 4G LTE eSIM, geofencing and anti-theft technology, and geotagging.

“People are giving all sorts of timelines for electric vehicle transitions, from 2025 to 2030,” Sharma says. “They are miscalculating and misjudging the transition time. It will not take more than three years. Sometimes you know when change comes, and some people will keep saying no. This is inevitable.”

Five-year-old dream
Revolt Intellicorp was set up in 2017 with a self investment of ₹500 crore. “I have had this dream for the past five years,” says Sharma. “The idea was to build something like Tesla in India.”

Three years later, however, he realised cars like Tesla wouldn’t have the impact he was looking for. Some 26 million vehicles are sold in India in a year, of which 21 million are two-wheelers. “If you want to bring a change, you have to start from two-wheelers,” Sharma says.

The government has introduced new incentives for adoption of electric mobility, with plans to make all three-wheelers go electric by 2023, and two-wheelers below 150 cc switch by 2025. In July, Finance Minister Nirmala Sitharaman announced income tax rebates of up to ₹1.5 lakh on interest paid on loans for electric vehicles, with a total exemption benefit of ₹2.5 lakh over the entire loan period. Lithium-ion cells have also been exempt from customs duty, helping lower their cost.

“There is a huge opportunity for replacement of two-wheelers,” says Vinay Piparsania, consulting director of Hong Kong-based Counterpoint Technology Market Research. “The numbers are perhaps comparable with what we have seen in the mobile phone category, and Rahul has the necessary tech experience and knowledge to scale up to create an impact. He is at an ideal place now to take advantage.”

Despite the significant traction that the electric bike industry in India had been getting, the segment has been stuck in a rut for years. Lack of stylish products and charging infrastructure, along with higher initial costs, have kept buyers away. Moreover, companies such as Ather Energy and Okinawa are focussed on scooters. Over the next few years, however, analysts expect the electric motorbike segment to play a significant role.

“Our research shows that existing players such as Hero and Bajaj will lose their market share significantly to electric two-wheeler makers,” says Deepesh Rathore, co-founder of Gurugram-based automotive consultancy Emerging Markets Automotive Advisors (EMMAAA). “For instance, Hero will have about 7 percent market share between 2025 and 2040, from about 36 percent now. Others like Ather Energy have the potential to be the next unicorn. So electric two-wheelers are set to change the landscape.”

That’s the potential that Sharma is looking to tap. “There was no right product. Somebody was making products with a top speed of 40 kmph, with a battery of 150 W. You can’t offer that to the Indian consumer. If you have to shift the industry, you have to produce something that the buyer can compare with existing models,” he says. RV400 offers features such as ‘bike tunes’, which is similar to a phone’s ringtone, but instead produces the sound of an engine’s exhaust.

Learning from Micromax
Perhaps, that’s a strategy Sharma learnt from his days at Micromax.

“If you give people something equal or better than what they are using, along with multiple benefits, they will go for it,” he says. “We know how to scale up a business, as you saw with Micromax.” For long, between 2010 and 2018, Micromax was among India’s top three smartphone makers before it lost out to Chinese companies.

In its heyday, it had posted annual revenues of nearly ₹10,000 crore (2016) and even contemplated a listing. “There are multiple learnings from Micromax,” Sharma says. “What we understand very well is consumer behaviour. We used to come up with new phones because we knew what the consumers wanted. We introduced a phone with Swarovski crystals for women, which was a huge hit, and we also introduced a long-life battery. That’s how between 2010 and 2016 we remained number one or two in the market.”

The last few years, however, have been bad for Micromax as Chinese phone makers flocked to India offering cheaper, newer phones, something that Micromax had specialised in. According to its financials for FY18, Micromax has reported a 26 percent decline in its revenues to ₹4,430 crore as against ₹5,614 crore in FY17; profits have plummeted by 76 percent to ₹104 crore in FY18.

“It was high time for him to move on,” says Faisal Kawoosa, founder and chief analyst at Gurugram-based research consultancy TechArc. “Other Indian mobile phone manufacturers like Lava and Intex are all finding alternative means to sustain themselves. That’s the case with Rahul too. Maybe he is trying to be an early mover in the electric bike sector. But I am not sure what the link is between mobile phones and mobility.”

Sharma, meanwhile, remains hopeful that the electric bike venture won’t meet a similar fate as Micromax. “In the automotive sector, we have an evolved ecosystem, unlike in China, and we don’t see any reason why they would be a threat in this segment. The Indian motorbike industry is different from the Chinese one,” he says.

Revolt’s 1 lakh sq ft facility in Manesar has over 300 employees. Among them are RK Gupta, former head of R&D at Escorts, Yamaha Motor India, and Shubhodeep Pal, a Micromax veteran. “If you see our product, it is a gadget. The leap here is that a technology that took 100 years to develop is now moving in a new direction. In the US, the most sold luxury vehicle is a Tesla, not a Mercedes,” says Sharma.

Yet, there are concerns about RV400. “All this talk of artificial intelligence is quite a hogwash,” says Rathore of EMMAAA. “The bike has basically come from China. I don’t have a problem with them selling the bike, but to claim that it was all developed in-house, while it looks like it was imported and assembled here is a little far-fetched.” The RV 400 does look eerily similar to the Chinese Super Soco TC Max. Sharma, however, claims that Soco designed only the frame for RV400, while Revolt owns everything else.

“They have a honeymoon period before the big guys come in,” says Rathore. “Electric is the future, despite all the conventional players raising concerns. However, as far as Revolt goes, it is something like an Android phone in the middle segment and will be difficult to differentiate from others. Unless you are at the top of the range, you won’t stand out.”

What happens now?
It’s not just the product that has to make a difference. “The ecosystem doesn’t inspire confidence among consumers,” says Arun Malhotra, former managing director of Nissan Motor India. “They are still sceptical about electric mobility, and bike makers have a task at hand to change that mindset. However, once the product is seen, perhaps it can help.”

India doesn’t have the required infrastructure to support electric mobility. While the government has begun work on setting up charging stations, it is expected to take time to be completed. Alongside, conventional motorcycle makers such as Hero and Bajaj have been at the forefront of a pushback against electric mobility. In June, Hero MotoCorp Ltd, Bajaj Auto Ltd, TVS Motor Co and Honda Motorcycle & Scooter India Pvt Ltd raised doubts about the feasibility of government plans to allow only electric two-wheelers by 2025.

“The government is pursuing the electric mobility plan quite aggressively,” says Arvind Singhal, chairman of consultancy firm Technopak Advisors. “Unlike traditional vehicles, electric bikes have minimal moving parts. That means repair and maintenance will be much less. The disruption will be in terms of how one sets up a showroom and delivers the product because it’s going to be different from existing practices.”

Sharma will also have to ensure that his venture meets the target of indigenising 50 percent of the product by 2021 to avail of government subsidies. “Indigenising is unlikely to stop the Chinese from setting foot in India in the two-wheeler electric bike category,” says Singhal.

For now, Sharma, who had pulled off a masterstroke by signing Hollywood star Hugh Jackman as the brand ambassador for Micromax is unfazed. The company, while not setting a target for sales, is planning a mix of an online and offline model for the sale of the bike. The stores, Sharma says, won’t be anything like a regular automobile showroom and instead will be tech stores, along the lines of Apple stores.

“The product is Hugh Jackman here,” says Sharma. “Let it do the talking.”