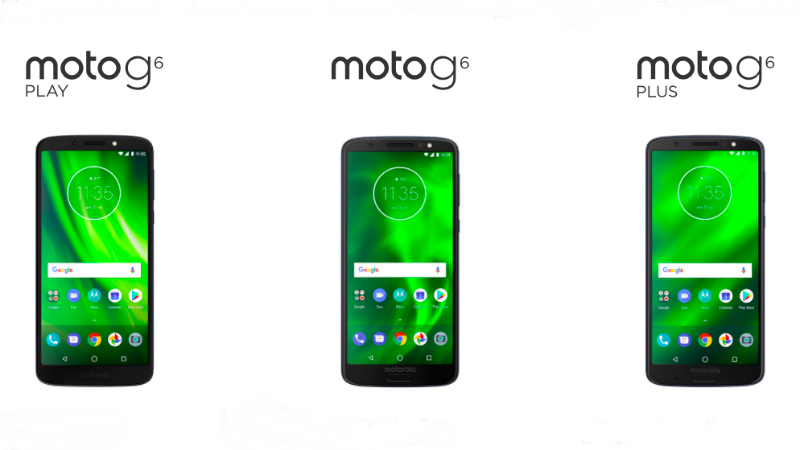 The Moto G6, Moto G6 Plus, and Moto G6 Play smartphones have finally become official after a host of leaks and rumours over the past few months. The new Moto G6 Plus sits at the top of the series with a marginally bigger display, faster processor, and more RAM than its two siblings. On the other hand, Moto G6 and Moto G6 Play have the same display size and RAM, but vary in terms of battery capacity, camera configuration, and the SoC. Alongside, the new Moto G series, Motorola has also launched the Moto E5 Plus and Moto E5 Play smartphones.

The smartphones will become available to purchase in Brazil today, and next week in Mexico; various countries in Asia Pacific – including India – Europe, Latin America and North America markets will get the handsets in the next couple of months. The Moto G6 price (MSRP) has been set as $249 (roughly Rs. 16,500), while the Moto G6 Play will cost the buyers $199 (approximately Rs. 13,000). As for the Moto G6 Plus price, it has been set as EUR 299 (about Rs. 24,350). There is no word yet on the Moto G6 series’ price in India or release date yet, though given the Moto G series’ popularity in the country, e can expect that to change soon.

Moto G6, Moto G6 Plus, Moto G6 Play specifications
The Moto G6 Plus has a 5.93-inch display with 18:9 aspect ratio and full-HD+ (1080×2160 pixel) resolution. Based on stock Android 8.0 Oreo, the dual-SIM (Nano-SIM) phone runs on the 2.2GHz octa-core Snapdragon 630 processor, with Adreno 508 GPU and 4GB RAM. In optics, there is a dual rear camera setup with 12-megapixel primary sensor featuring 78-degree lens and f/1.7 aperture, and a secondary camera with 5-megapixel sensor having 79-degree lens and f/2.2 aperture In the front is an 8-megapixel camera with 80-degree lens and f/2.2 aperture. The phone has dual-tone, dual-lens LED flash on the back, and a selfie flash in front.

When it comes to storage, buyers will get 64GB of internal storage and microSD support up to 128GB. Connectivity suite of the smartphone includes 4G LTE, Wi-Fi, Bluetooth 5.0, USB Type-C, NFC, 3.5mm audio jack, and the usual set of sensors. The Moto G6 Plus battery capacity is 3200mAh, with support for Motorola’s TurboPower adaptor (which is claimed to deliver 7 hours of use on a charge of 15 minutes). The handset is listed in Indigo and Gold colours, measures 159.9×75.5×7.99mm, and weighs 165 grams.

Moto G6 is the next handset in the new range, and features a 5.7-inch screen with full-HD+ resolution and 18:9 aspect ratio. The smartphone is powered by the 1.8GHz octa-core Snapdragon 450 SoC with Adreno 506 GPU and 3GB RAM. Like its more powerful sibling, it runs stock Android 8.0 Oreo software and supports dual-SIM (Nano-SIM) functionality. As for the camera, there’s a familiar dual rear camera setup — 12-megapixel primary camera with 76-degree lens and f/1.8 aperture, and 5-megapixel secondary camera with 79-degree lens and f/2.2 aperture. You get a dual-tone, dual-lens flash on the back too, along with a single LED flash in front. 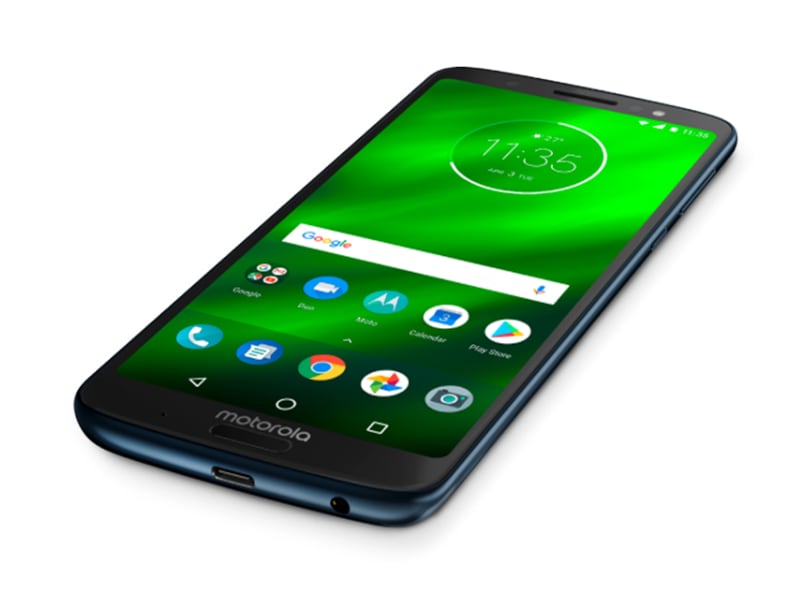 The all-new Moto G6 comes with 32GB of built-in storage, and support for storage expansion up to 128GB via microSD cards. For connectivity, the smartphone has 4G LTE, WI-Fi, USB Type-C, NFC, 3.5mm earphone jack, the  standard sensors, and Bluetooth 4.2. There’s a 3000mAh battery with TurboCharge support to keep things running. Available in Indigo and Silver colour options, the model measures 153.7×72.3×8.3mm.

Moto G6 Play has a 5.7-inch display with 18:9 aspect ratio too, but it gets a panel with HD+ (720×1440 pixel) resolution. Stock Android 8.0 Oreo, dual-SIM (Nano-SIM) have made their way here too, but the processor has been switched to 1.4GHz oct-core Snapdragon 430, with Adreno 505 GPU. Buyers also get 3GB RAM, 32GB internal storage, and microSD card support up to 128GB. A 13-megapixel camera with f/2.0 aperture and single LED flash is on the back, while a similar selfie flash and an 8-megapixel sensor with 80-degree lens and f/2.2 aperture is on the back.

The highlight of the Moto G6 Play is its large 4000mAh battery, again with TurboCharge support. Connectivity options include 4G LTE, Wi-Fi, Bluetooth 4.2, USB Type-C, 3.5mm audio jack, and the usual sensors. Released in Indigo and Gold colours like its sibling Moto G6, the handset weighs 173 grams and measures 154.4×72.2×8.95mm.

The Moto G6 and Moto G6 Plus feature the fingerprint sensor in the front, below the display, while the Moto G6 Play has it embedded in the Moto logo on the back.