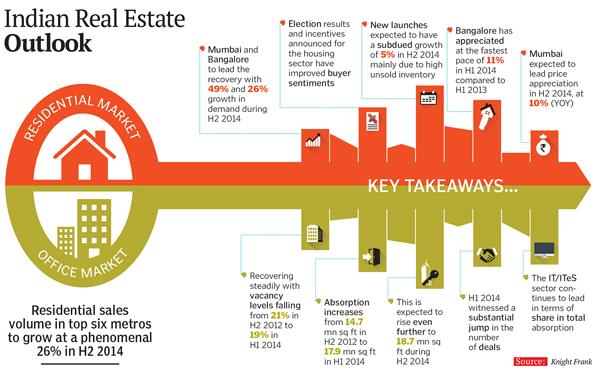 Maharashtra’s change in law allowing a reduction in ready-reckoner or benchmark property rates suggests that a revival from the disruption caused by the cash ban and a strict housing regulation may take another 12-18 months, Knight Frank India said.

Most of the people who don’t need houses immediately in Mumbai, India’s second-largest property market, will prefer waiting to see a further correction in real estate prices, Gulam Zia, executive director of the property consultancy firm said in an interview with BloombergQuint.

While a lot of things are falling in place, the economic sentiment isn’t. The GDP growth numbers and employment growth that we are talking about are yet to show on ground.

Maharashtra amended the Bombay Stamp (Determination of True Market Value of Property) Rules, 1995, according to a gazette notification on March 12. This gives the Inspector General of Registration powers to lower the benchmark rates, the first time in at least a decade.

A possible cut in ready-reckoner rates, which serve as the basis to calculate stamp duty and registration fee, reflects the government’s assessment of the market. Property prices have fallen and developers are sitting on unsold inventory after the demonetisation hurt cash-driven realty market and the Real Estate Regulation Act stipulated strict deadlines and left smaller developer without funds. The state is also considering waiving the property tax on flats with carpet area of up to 700 square feet to clear the unsold inventory.