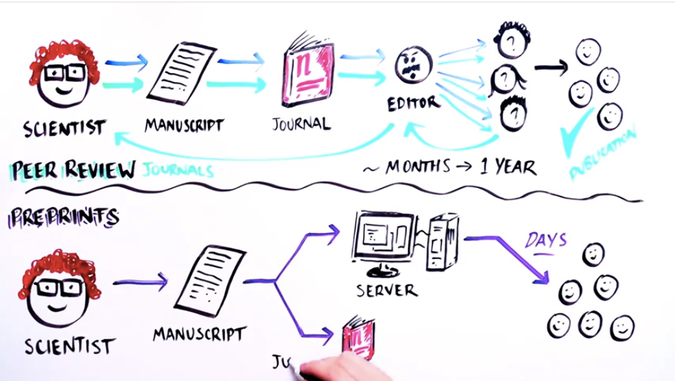 Carol Greider of Johns Hopkins University became the thirdNobel Prize laureate biologist in a month to do something long considered taboo among biomedical researchers: She posted a report of her recent discoveries to a publicly accessible website, bioRxiv, before submitting it to a scholarly journal to review for “official’’ publication.

It was a small act of information age defiance, and perhaps also a bit of a throwback, somewhat analogous to Stephen King’s 2000 self-publishing an e-book or Radiohead’s 2007 release of a download-only record without a label. To commemorate it, she tweeted the website’s confirmation under the hashtag #ASAPbio, a newly coined rallying cry of a cadre of biologists who say they want to speed science by making a key change in the way it is published.

Such postings are known as “preprints’’ to signify their early-stage status, and the 2,048 deposited on three-year-old bioRxiv over the last year represent a barely detectable fraction of the million or so research papers published annually in traditional biomedical journals.

But after several dozen biologists vowed to rally around preprints at an “ASAPbio’’ meeting last month, the site has had a small surge, and not just from scientists whose august stature protects them from risk. On Twitter, preprint insurgents are celebrating one another’s postings and jockeying for revolutionary credibility. (These two are from a molecular biologist at the University of California, Berkeley and a Cold Spring Harbor neuroscientist.)

For most of the history of organized scientific research, the limitations of technology made print journals the chief means of disseminating scientific results. But some #ASAPbio advocates argue that since the rise of the Internet, biologists have been abdicating their duty to the public — which pays for most academic research — by not sharing results as quickly and openly as possible. As Harold Varmus, another Nobel Prize recipient and former director of the National Institutes of Health put it in a widely tweeted talk at the conference: