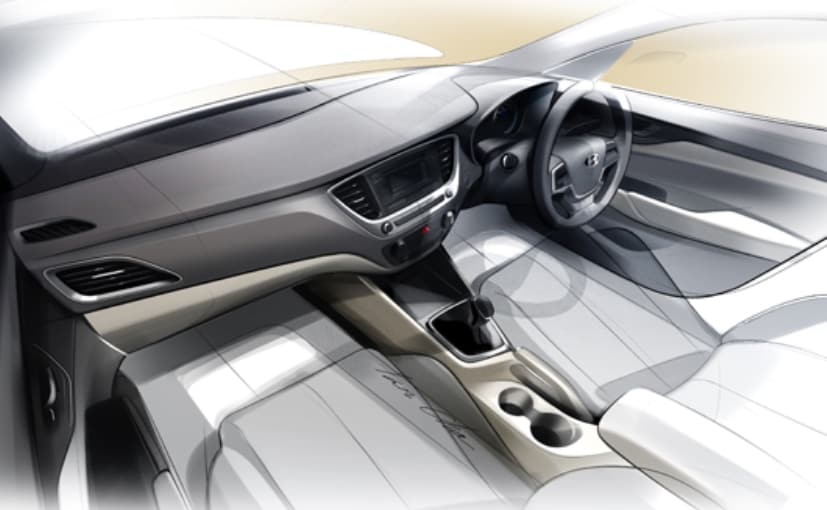 Hyundai India has released a new teaser image of the upcoming 2017 Hyundai Vernaon its website, announcing the car’s imminent arrival. Slated to be launched in August in 2017, the new-gen Verna sedan comes with new design language, improved styling cues and a host of new smart features to take things to the next level. The new Hyundai Verna will borrow its cues from the Elantra, which was launched in India just last year and was widely appreciated for its styling and performance. Upon launch, the new Verna will rival the likes of the Maruti Suzuki Ciaz, Honda City, Skoda Rapid, and the Volkswagen Vento. The new teaser image released by Hyundai is more of a design sketch of the new Verna’s cabin. Judging by the looks of it’s the cabin of the India-spec Hyundai Verna will remain largely similar to the Chinese-spec model that was revealed last year. The dashboard is more driver-oriented and is well-designed. There is a new 7-inch touchscreen infotainment system at the centre of the dashboard flanked by pentagonal air vents on either side and other dials and control below it. The new-gen Hyundai Verna now also looks a lot more upmarket and the pictures suggest that the fit and finish has improved as well. 2017 Hyundai Verna shares its cues with the new Elantra

Also, Hyundai has increased the wheelbase of the new generation Verna by 10 mm and the overall length of the car by 15 mm. The width of the car has also gone by 29 mm. This means that the new car will be roomier than the model currently on sale in India. The company has updated the chassis of the 2017 Hyundai Verna by making use of high-strength steel which makes it lighter and stronger. Along with the chassis, the suspension of the car too gets a few tweaks.

Last month the company’s released another teaser image of the new Hyundai Verna, giving us a sneak-peek at the car face. The teaser image revealed that the car will come with the new larger hexagonal grille, in Hyundai’s new cascading design, C-shaped LED daytime running lights and LED foglamps. The car will also come with projector headlamps, most likely in the to-end variant, along with a more imposing front bumper. Other features include – new alloy wheels, door handles in chrome finish and tinted windows. Under the hood, the India-spec version is expected to continue with the same powertrain options – 1.4-litre petrol, 1.6-litre petrol, 1.4-litre U2 CRDi diesel and 1.6-litre CRDi diesel.