Number Of People Forced To Flee War, Violence To Hit Record In 2015: UN 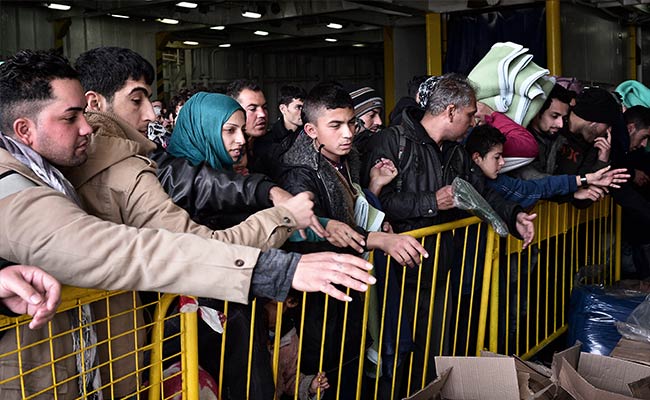 The UN refugee agency’s report showed rocketing numbers of people living as refugees, asylum seekers or displaced within their countries during the first half of the year. (AFP/ File Photo)

GENEVA:  The number of people who have been forced to flee war, violence and persecution looks set to soar in 2015 past last year’s record of nearly 60 million, the UN said today.

The UN refugee agency released a report showing rocketing numbers of people living as refugees, asylum seekers or displaced within their countries during the first half of the year, and indicated that the full-year figures would be devastating.

“With almost a million people having crossed the Mediterranean as refugees and migrants so far this year, and conflicts in Syria and elsewhere continuing to generate staggering levels of human suffering, 2015 is likely to exceed all previous records for global forced displacement,” UNHCR said.

Last year, the number of displaced soared to a record 59.5 million worldwide, and today’s report indicated that this year the figure “has far surpassed 60 million”.

That basically means that one in every 122 people on the planet is today someone who has been forced to flee their home, the agency said.

“Never has there been a greater need for tolerance, compassion and solidarity with people who have lost everything.”

During the first six months of the year, at least five million people were newly displaced, with 4.2 million of them remaining inside their country and 839,000 crossing borders — the equivalent of 4,600 people becoming refugees every single day, the report said.

By the end of June, 20.2 million people were living as refugees worldwide, marking a 45-percent jump since 2011.

The main contributor is the ruthless conflict in Syria, which by June this year had created 4.2 million refugees, UNHCR said.

Without this factor, the global increase in refugee numbers from 2011 to mid-2015 would have been just five percent, the agency said.

UNHCR meanwhile pointed out that Europe’s migration crisis — its worst since World War II — is only partially reflected in the new numbers, since arrivals have escalated dramatically in the second half of 2015, a period not covered by the report.

Global asylum applications shot up 78 percent compared to the first half of 2015 to nearly a million, the report showed.

Germany was the world’s biggest recipient of asylum claims, clocking 159,000 during the six months leading to June — close to the total for all of 2014.

But the situation has escalated dramatically since then, with Germany now expected to take in one million asylum-seekers by the end of the year.

Russia came in second place in terms of asylum applications, receiving 100,000 in the first half of 2015, mainly from people fleeing the conflict in Ukraine.

The overall number of internally displaced people (IDPs), subtracting those who have returned home, swelled by two million over the six month period to about 34 million, the report said.

War-ravaged Yemen alone saw 933,500 new IDPs in the first half of the year, while the war in Ukraine displaced 559,000 internally, and the Democratic Republic of Congo counted 558,000 new internally displaced.

UNHCR meanwhile warned the global IDP numbers were likely higher, since the report only covers internally displaced people under UNHCR protection, and not those cared for at a national level.