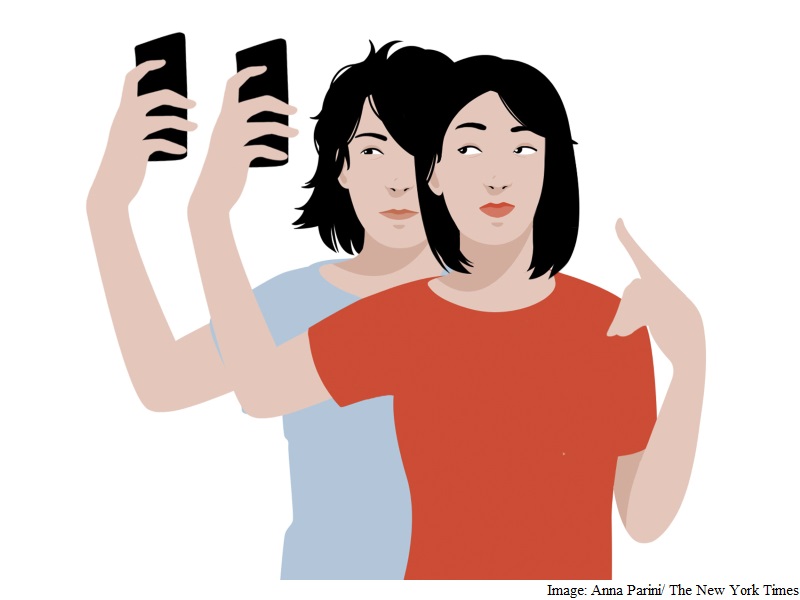 For a certain generation, Instagram has become a calling card, a life résumé of sorts: “This is me. This is my life. Jealous?”

A scroll through a typical feed is likely to reveal improbable images of just the right artisanal pizza, attractive couples drunk in love and eyebrows “on fleek,” all captured in perfect light and enhanced with various editing tools.

Life becomes a never-ending junior varsity “Vanity Fair” shoot, and the pressure among Instagram’s regular users to present idealized images of themselves has only increased as celebrities have inundated the platform with their own envy-evoking posts.

But life isn’t all rooftop parties and 45-degree-angle selfies. Some young adults, weary of trying to live up to their annoyingly perfect online avatars, have created “finstagrams,” or fake Instagram accounts, that present truer versions of themselves than their main profiles. These locked, pseudonymous accounts capture something rarely seen by people who follow these same users on their main accounts: reality.

What Are Finstagrams, Exactly?
Created mainly by teenagers and 20-somethings, finstagrams are intimate online spaces intended for an audience of friends, with the number of followers purposely kept in the low double digits.

“Finstas are private accounts that you only let your closest friends follow,” said Amy Wesson, 18, a student at Trinity College who has more than 2,700 Instagram followers and about 50 finstagram followers. “You post things you wouldn’t want people other than your friends to see, like unattractive pictures, random stories about your day and drunk pictures from parties.”

Omid Cohensedgh, 19, a student at Columbia College, said his finstagram gives him an online platform for sharing inside jokes with a group of 25 people.

“Me and my roommate have these posters of Drake on our wall, and it’s an inside joke that we’re obsessed with him,” Cohensedgh said. “I wouldn’t feel comfortable sharing photos of them with people who might not get it.”

Some people use their fake accounts to stay connected with friends and family. Ixchel Lopez, 18, a Wellesley College student who has more than 570 followers on her main account, shares a charmingly absurd account with her younger sister that is devoted to photos of lizards.

Principles that guide Instagram are cheerfully ignored on fake accounts: If posting more than once a day to a main account is considered something of a faux pas, it’s perfectly acceptable, on a finstagram account, to unleash a stream of mundane images, screen shots of text conversations and ugly selfies.

Seems Ridiculous?
More than half of the 92 percent of teenagers ages 13 to 17 who go online daily use Instagram. While young people of every generation have struggled with how to project their identities onto the greater world, teenagers of 2015 arguably have it worse. Given the pervasiveness of social media, the feedback mechanism never shuts down.

“Before, while you were sleeping, you were sleeping,” said Leora Trub, an assistant professor of psychology at Pace University and a clinical psychologist who works with adolescents and young adults. “Nobody was judging you, and you weren’t waking up to an entire other self that existed in this online space that’s being commented on.”

Trub supervised the research on a study that found a link between the number of strangers that Instagram users follow and the possibility that they experience depressive symptoms, such as fearfulness, loneliness or fatigue.

For many young people, social media has become a burden, a part of life that must be managed. Consider the story of Essena O’Neill, a 19-year-old Australian who, with more than 800,000 followers, was considered an Instagram star before she deleted her account. Recently, O’Neill started the website Let’s Be Game Changers to campaign against the pressure to perform that seems integral to the social media experience.

“I made myself into a machine that gave others what they wanted from me, never knowing or valuing my true self,” O’Neill wrote on her website. “I was lost to expectations, pressures and a fearful desire to be accepted.”

While O’Neill’s case is extreme, many teenagers similarly think that their main Instagram accounts do not present fully authentic versions of themselves.

“Everything that goes on my regular Instagram is a picture of me and other people, and everybody looks good, and it feels important,” said Rebecca Cibbarelli, 18, a student at Franklin & Marshall College with more than 420 followers on her real Instagram and 30 on her fake one. “On finstagram, you post whatever you want because you don’t care.”

The Friend-and-Family Zone
Because they are locked, finstagram accounts allow you to screen your followers; no one can follow you without your permission.

“You follow them first – that’s how you alert people that it’s there,” said Dominique Escandon, 18, a student at Carnegie Mellon University who has more than 370 followers on her main account and 33 on her pseudonymous one. “You tend to follow your best friends.”

Keeping the numbers low encourages conversation and ensures that a post meant in jest won’t serve as fodder for trolls. For a time, Escandon took on an alter ego on her fake account, filling it with images and captions meant to portray her as a right-wing “trophy wife.”

“Someone I recently met tried to follow my second account, and I still haven’t accepted her,” said Lopez, the Wellesley College student. “I haven’t declined or accepted. I don’t know. It made me really think about the kind of stuff I post there.”

As in the offline world, inner circles can be fluid. In the 2015 teenage comedy film “The DUFF,” starring Mae Whitman, three high school friends have an argument and begin listing the social media accounts belonging to the others that they are now “unfollowing.” One of the first mentioned is a girl’s finstagram.

In less dramatic fashion, Sophie Stadler, 18, a student at the Fu Foundation School of Engineering and Applied Science at Columbia University, recently culled her finstagram followers, deleting 14 of the 30.

“It was inhibiting what I would actually post,” Stadler said. “I wanted it to be more of a natural thing I was doing for myself.”

Backstabbers aren’t unheard-of. Called “finsta snitches,” these people take screen shots of revealing posts and use them for leverage. Lopez described a situation in her high school in which several students posted compromising photos on their fake accounts that eventually reached the inboxes of authority figures.

“It comes down to trust,” said Toni Dawkins, who dealt with the question of fake Instagrams on her podcast “Tuesdays With Toni.” “If you’re going to post embarrassing things, you have to trust that group of people to not share it out.”

Why Not Just Use Snapchat?
Because of its casual and spontaneous nature, fake Instagram is sometimes compared to Snapchat.

But many younger Snapchat users have hundreds of friends on Snapchat and put a considerable amount of effort into their Snapchat Story posts, which can be seen by all of their followers and remain online for 24 hours.

In a sense, fake Instagram posts are similar to Snapchats that users send to individual followers and that disappear in 10 seconds or fewer after being opened.

In either case, fake Instagram has two benefits over Snapchat: its permanence and its allowance for more words.

“Snapchat is more ephemeral,” said Cohensedgh, the Columbia College student. “You don’t have to think about it afterward. Finstagram is a history of funny things you came up with. It’s more permanent and concrete.”

And Escandon, whose fake Instagram account was satirical, said: “You can be more explicitly funny in places where you’re allowed to have more text.”

Splintering as Self-Preservation
Fake Instagram accounts seem to be a distinct cultural product of people belonging to a generation raised with social media and smartphones. They are used to funneling their self-expression through many platforms, where their peers provide an instant response, much of it cutting.

Because of this, finstagram, which is made for an audience of people who are tuned into the user’s point of view, has become, paradoxically, the “real” Instagram.

“These platforms aren’t going anywhere, and we won’t get anywhere by trying to fight them or say they are bad,” said Trub, the clinical psychologist. “We need to be aware of how they’re operating for us and to build more agency around how we interact with them. That’s the best we can hope for.”