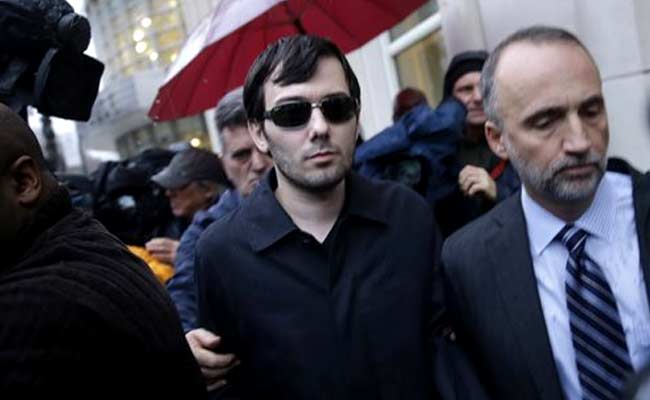 Martin Shkreli (C), CEO of Turing Pharmaceutical, is brought out of 26 Federal Plaza by law enforcement officials after being arrested for securities fraud on December 17, 2015 in New York City. (AFP)

NEW YORK:  Martin Shkreli is a biotech executive who favors open-collar shirts over lab coats, the founder of a hedge fund who eschewed discretion by broadcasting his life on YouTube, a pill seller who made no bones about his power to raise the price of his medicines.

He struck the very image of a hip young executive who reveled in his ability to shake up the very button-down worlds of high finance and pharmaceuticals.

On Thursday, this 32-year-old live-out-loud agent for the new economy was accused of profiting from a decidedly old-school crime.

Shkreli was arrested on securities-fraud charges, unceremoniously marched from his Manhattan home wearing a gray hoodie and jeans. Federal prosecutors accused him of deceiving investors by covering bad bets at his hedge funds with a series of cash and stock transactions at his biotech firm.

Shkreli “engaged in multiple schemes to ensnare investors through a web of lies and deceit,” U.S. Attorney Robert L. Capers told reporters in New York. “His plots were matched only by efforts to conceal the fraud, which led him to operate his companies . . . as a Ponzi scheme.”

At his arraignment later in the afternoon, Shkreli pleaded not guilty. He stood at the front of the courtroom next to his father and brother, who had come to assure the court that he would not flee. Shkreli tilted his head to the ceiling as the judge said he would be released on a $5 million bond.

Surrounded by reporters as he left the courtroom, Shkreli, for the first time in months, declined to speak.

Shkreli’s attorneys declined comment, and the spokesman at his drug company, Turing Pharmaceuticals, did not return emails seeking comment.

The Brooklyn native first stepped into the limelight this fall when, as head of Turing, he boosted the price of a little-known pill called Daraprim from $13.50 to $750. Daraprim is a 62-year-old drug crucial to treat a severe parasitic infection that afflicts a relatively small but vulnerable patient community: people with compromised immune systems, such as HIV and cancer. The outrage and condemnation was quick, and politicians and presidential candidates seized the moment.

Through it all, Shkreli remained unapologetic. He called a journalist a “moron,” defended his business move without remorse and courted the image of a provocateur. If anything, the attention seemed to prompt Shkreli to act even more outrageous, by streaming his life on YouTube for anyone who wanted to tune in and boasting about buying the only copy of a Wu-Tang Clan album for $2 million.

At the Forbes Healthcare Summit this month in New York, Shkreli was given an opportunity to repent when asked whether he would have done anything differently. There was one thing, he said.

“I probably would have raised the price higher,” Shkreli said.

Long before the world learned what Daraprim was, biotech investors already knew Shkreli from the sometimes vocal role he played on investor message boards when he tried to short stocks, betting that their prices would fall.

Prosecutors alleged the trouble began after Shkreli started a hedge fund, MSMB Capital, in 2009. He raised millions from investors and then made a risky bet that the stock of a small pharmaceutical company would fall. The gamble cost Shkreli and the hedge fund $7 million, according to his indictment.

Instead of acknowledging the loss, law enforcement officials said, Shkreli started another hedge fund and raised even more money. He used that fund, MSMB Healthcare, to bail out some of his previous investors and start a new company, Retrophin. He also allegedly continued to lose money – and lie.

Shkreli told potential investors that MSMB Healthcare had a $55 million war chest when it never had more than $6 million, according to the indictment. Some investors were told that he had significantly increased their money when actually all of their cash had been lost on bad bets or used to bailout other customers. Shkreli “concealed from potential investors [his] disastrous past performance as a portfolio manager,” according to the indictment.

When investors began to ask for their money back, Shkreli turned to Retrophin, a biopharmaceutical company, according to the indictment. Shkreli directed millions in stock and cash from Retrophin toward settling claims with disgruntled investors. He masked some payments under the guise of “consulting contracts” and never told Retrophin’s board what the money was really for, according to the indictment.

Retrophin’s board removed Shkreli last year, saying it had serious concerns about his conduct and filing suit against its former chief executive.

“Following his departure, the company authorized an independent investigation of Mr. Shkreli’s conduct, publicly disclosed its findings, and has fully cooperated with the government investigations into Mr. Shkreli,” Retrophin said in a statement Thursday.

Evan Greebel, former outside counsel to Retrophin, was charged Thursday with helping Shkreli with his fraudulent schemes. Greebel was released on a $1 million bond.

Shkreli’s ouster from Retrophin did not dampen his appetite for the pharmaceutical business. He founded another company, Turing, earlier this year. He also bought a majority share in KaloBios Pharmaceuticals and was named its chief executive last month.

Shkreli eventually agreed to lower the price to hospitals of Daraprim, the drug that turned him into an Internet meme, but the former hedge fund manager has remained outspoken in the face of intense media scrutiny. After it was revealed that he paid $2 million for the one-of-a-kind Wu-Tang Clan album, he lashed out at the hip-hop group for distancing itself from him. “If I hand you $2 million . . . show me some respect. At least have the decency to say nothing or ‘no comment,’ ” he said on Twitter. (The FBI said in a tweet that it had not seized the album.)

Shkreli is “fascinating because he’s outrageous and because he taps into deep fears that a lot of people have about the health-care system, and specifically about pharma and bio,” said Hank Greely, director of the Stanford Center for Law and the Biosciences, noting that while Shkreli’s price increase was egregious, others in the drug industry raise prices – to a far smaller degree – year after year.

Though Shkreli seemed to take the criticism of Turing’s decision to raise drug prices in stride – “I like to stir the pot, but I would never, ever price a drug beyond a sick person’s reach,” he said on Twitter earlier this week – it may be harder to shake off the reputation of poor investor.

In addition to the criminal charges, for which he could face up to 20 years in prison, the Securities and Exchange Commission has filed civil charges against Shkreli and could bar him from serving on a company board again.