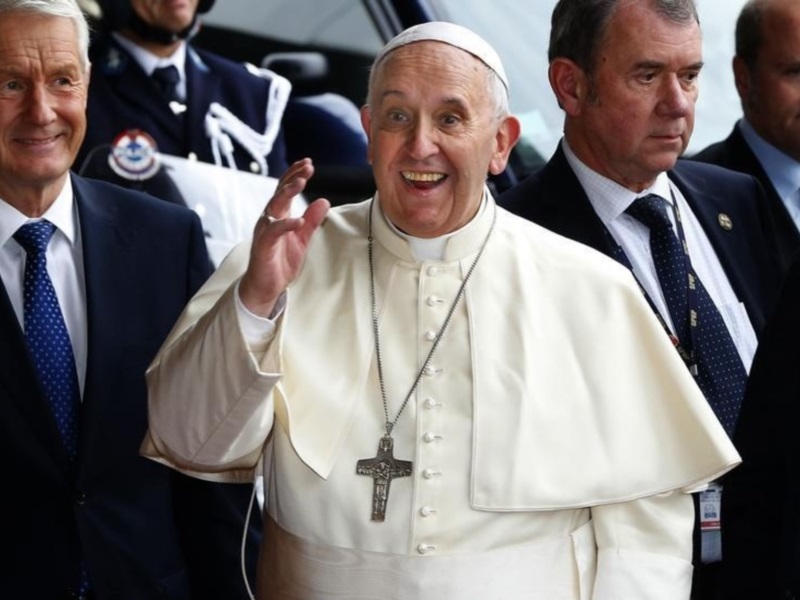 Over the first two-and-a-half years of his papacy, Francis has transformed from a tech “dinosaur” into the first pope to regularly use Twitter, says Michael O’Loughlin, author of “The Tweetable Pope.”

The following is an interview with O’Loughlin about the pope’s use of technology, ahead of his visit next week to the United States, one of the most technologically advanced countries on Earth:

Q: What is the pope’s relationship with the Internet?

A: Pope Francis isn’t exactly cutting edge when it comes to tech. He called himself a “dinosaur” and he admitted he doesn’t know how to use a computer. He communicates via fax machine to his top advisors, and he hasn’t watched television since the 1990s.

Still, he has certainly embraced technology in his pontificate. He’s held a couple of Google hangouts with students from all over the world. He once called the Internet a “gift from God” and has praised its ability to form communities, while also warning his flock about the dangers that it can facilitate.

Pope Francis wants to meet people where they are and he knows that so many people are on social media. So while he might not be tapping away on the keyboard or iPad himself, he certainly knows the value of technology and has largely welcomed it into the Vatican.

Q: Is he using Twitter more than his predecessors?

A: He is the first pope to fully adopt social media. He has taken Twitter by storm. Pope Francis has tweeted nearly 700 times while Benedict XVI tweeted 39 times. He has 23 million followers (on his different language accounts combined) while Benedict XVI had three million.

There are lots of celebrities and politicians with more Twitter followers than Pope Francis, but he is becoming a superstar on Twitter. By one estimation, he is by far the most influential global leader on Twitter. This is because his followers retweet him at such a high rate.

He tweets in nine languages including Arabic and Latin and he’s covered a wide range of topics, from Jesus and prayer to sports and gossip.

Some people dismiss Twitter as trivial because of the 140 character limit, but it’s actually incredibly difficult to distill thought-provoking, inspiring and challenging messages down to just a couple of phrases that people can remember. Pope Francis is a master at this, and that seems to be why his 23 million followers respond so enthusiastically.

A: He has lent his moral voice to a range of causes, such as campaigns to highlight Christian persecution, efforts to stop wars, calling attention to environmental degradation and more.

The pope waded into the intense debate about inequality with a tweet sent in April 2014 that said simply, “Inequality is the root of social evil.”

When the pope released his encyclical about the environment in June, he was aware that most people won’t dive into a 200-page document. So he used a “Twitterbomb,” tweeting out the highlights every hour for 24 hours. This helped his message reach more people, directly.

Twitter is a tool to get a message out, whether that message is liberal or conservative or somewhere in the middle, and Pope Francis is taking his message to where most people will hear it: online.

His tweets as a whole are complex and surprising, just like the pope himself. Francis speaks in sound-bites, by which I mean he’s able to cut to the heart of the matter and offer complex, inspiring and challenging messages that people will remember and think about.