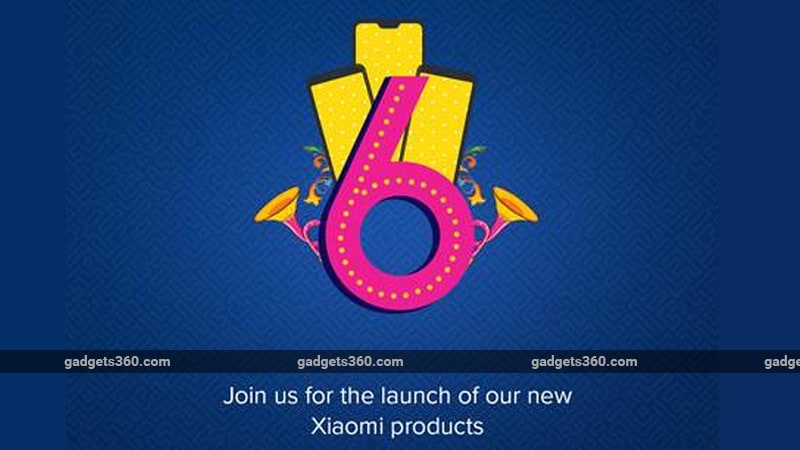 Redmi 6, Redmi 6 Pro, and Redmi 6A India launch event may be held as early as next week. Manu Kumar Jain, Xiaomi Global VP and Xiaomi India Managing Director, has shared a tweet that hinted at the imminent launch of the Redmi 6-Series smartphones. To recall, all three smartphones in the series were launched in June in China, with the Redmi 6 and Redmi 6A launched by Xiaomi side-by-side, and the Redmi 6 Pro being unveiled a couple of weeks later. Redmi 6 and Redmi 6A, however, will differ from their China variants in one respect at least – the two smartphones will feature Qualcomm processors instead of the MediaTek SoCs they have in their home market. The Redmi 5 and Redmi 5A, the predecessors of the smartphones, were both very popular models in India. A separate invite was also shared, confirming the September 5 launch date.

In his tweet on Thursday, Jain said, “#DeshKeNayeSmartphones! Mi fans! We’ve got more than one for you! Coming very soon.” While this does not imply the launch of the Redmi 6-Series of smartphones, the tweet contains a video that shows the number 6, with three smartphone outlines behind it. Two of the smartphones feature no display notches, while the third one does – clearly pointing to the Redmi 6 Pro, which is the only one amongst the three to sport a display notch.

No launch date beyond “very soon” was hinted at by Jain; however, the company sent media invites alongside, showing the same three smartphones and revealing a September 5 date for a launch event in New Delhi.

Let’s run through the three smartphones’ specifications, to give you a better idea of what’s arriving in the Indian market in the near future. As for pricing, the Redmi 6 price in China is set at CNY 799 (roughly Rs. 8,400) for the 3GB RAM/ 32GB inbuilt storage variant, and CNY 999 (roughly Rs. 10,500) for the model with 4GB of RAM and 64GB storage.

The Redmi 6 is a dual-SIM smartphone and runs MIUI 9 based on Android 8.1 Oreo. It sports a 5.45-inch HD+ (720×1440 pixels) display with an 18:9 aspect ratio; an octa-core 12nm MediaTek Helio P22 SoC (clocked at 2GHz); a dual camera setup with a 12-megapixel primary sensor and a 5-megapixel secondary sensor, a 5-megapixel front camera, a 3,000mAh battery, as well as expandable storage via microSD card (up to 256GB) with dedicated slot.

A more basic variant of the Redmi 6, the Redmi 6A is also a dual-SIM phone that runs MIUI 9 based on Android 8.1 Oreo out-of-the-box. Other specifications include a 5.45-inch HD+ (720×1440 pixels) display with an 18:9 aspect ratio; a quad-core 12nm MediaTek Helio A22 SoC; a single 13-megapixel rear camera; a 5-megapixel front camera; a 3,000mAh battery, expandable storage via microSD card (up to 256GB) with a dedicated slot.

Finally, the Redmi 6 Pro is a dual-SIM smartphone that runs MIUI 9 based on Android 8.1 Oreo. It sports a a 5.84-inch full-HD+ (1080×2280 pixels) display; an octa-core Snapdragon 625 SoC clocked up to 2GHz; a dual rear camera setup with a 12-megapixel primary sensor and a 5-megapixel secondary sensor; a 5-megapixel front camera; expandable storage via microSD card (up to 256GB) with a dedicated slot, and a 4000mAh battery.