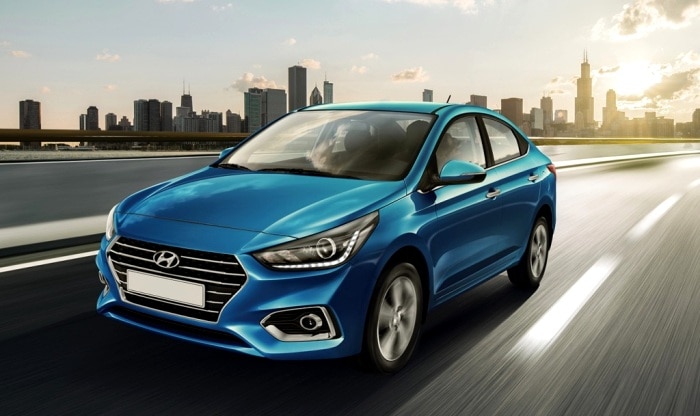 The new generation Hyundai Verna 2017 is speculated to be launched in India on 22 August, 2017 which will take on the likes of Maruti Ciaz and Honda City. We previously had reported that the South Korean automaker will be launching the next-gen Hyundai Verna by the end of this August. The updated Verna sedan has been seen testing on Indian roads for quite some time now. In a bid to dominate the mid-size sedan space, the all-new Verna sedan will sport new exterior design with inspiration from current generation Hyundai Elantra. The third generation will be based on Hyundai‘s Fluidic Sculpture 2.0 design philosophy that proffers the sedan with an aggressive design. Also Read: GST effect: Discounts up to INR 25,000 to INR 2.5 lakh on Maruti Suzuki Swift, Ford EcoSport, Hyundai Elite i20, Santa Fe, VW Polo & others

Having said that the 2017 Verna will be based of Fluidic Sculpture 2.0 design theme, the sedan will be bigger and lighter in weight as compared to the current model. Dimension wise, the third generation Verna sedan will measure 4385mm in length, 1729mm in width, 1450mm in height and 2580mm in wheelbase. The length of the new gen Verna will be increased by 15mm while the width will go up by 29mm along with the wheelbase will also be increased by 10mm making the sedan roomier than the current model. The company also claims that the overall driving dynamics of the all-new Verna will be lot better in comparison to the current model. Also See: Hyundai Verna 2017: India launch date, price, mileage, features – All you need to know

The new Hyundai Verna 2017 will borrow design inspiration from the unit which is currently on sale in the markets like Russia, Canada & China. It will sport cascading hexagonal grille at the front which will be flanked by new projector headlights and LED DRLs, sloping roofline, new 16-inch alloy wheels, LED tail lamps and a sporty rear bumper. On the inside, the new sedan is expected to carry dual-tone black and beige interior which will be complemented by features such as a 8-inch touch-screen AVN system with MirrorLink, Apple CarPlay and Android Auto, automatic climate control, reverse camera, parking sensors, 6-airbags, ABS with EBD, Engine start/stop button. See Also: Hyundai Elite i20 facelift spied testing under camouflage; India launch early 2018

Under the hood, the all-new sedan is speculated to sport same set of powerhouse options as seen on the current model. The petrol units will sport 1.4-litre & 1.6-litre petrol engines while the diesel variant will be seen carrying 1.4-litre CRDi and 1.6-litre CRDi diesel engines. The transmission duties will be carried out by 5-speed or 6-speed manual unit. It is also believed the company could incorporate Hyundai Creta’s 6-speed unit as well. See More: Upcoming new Hyundai Cars coming to India in 2017-18: New generation Verna, Santro, Creta facelift & Carlino