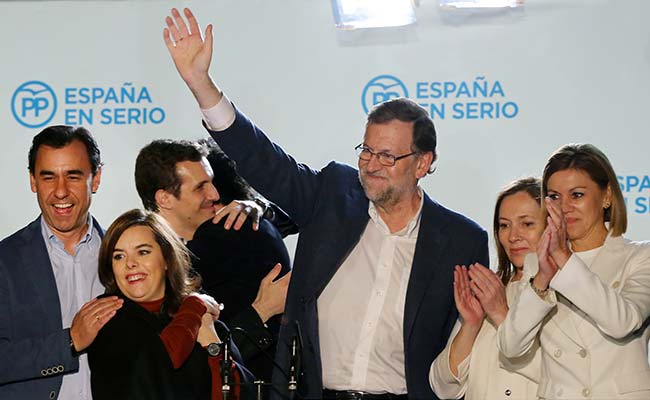 MADRID:  Spain’s main left-wing parties said today they would prevent conservative Prime Minister Mariano Rajoy from forming a government after his ruling Popular Party won the most votes but lost its absolute majority in elections.

In a press briefing, far-left Podemos chief Pablo Iglesias said his upstart party that came third in Sunday’s elections would not support any form of PP government, while Cesar Luena of the Socialist party (PSOE) said it would not back a Rajoy-led cabinet.

Podemos gained a surprisingly high 69 seats in parliament after the polls, gnawing at the left-wing supremacy of the PSOE which only obtained 90 seats — 20 less than in 2011 elections which it lost.

But with the PP only winning 123 seats — far short of the 176 it would need for an absolute majority — the two left-wing parties are key to whether Rajoy can form a government or not.

Centre-right upstart Ciudadanos, which for a time had been tipped to do well and could have supported Rajoy, only came fourth in elections with just 40 seats and has also ruled out backing the beleaguered premier.

“On no account will Podemos allow the PP to govern,” the 37-year-old Iglesias told reporters.

“As far as I know, the PP is going to put forward Rajoy, and so the PSOE will vote no to the PP and Rajoy,” he said.