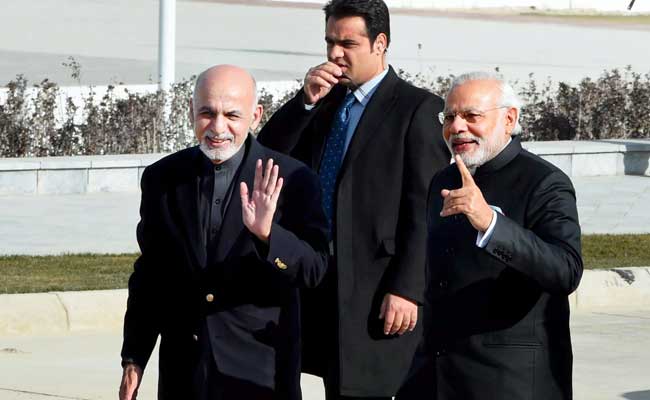 Prime Minister Narendra Modi with Afghan President Ashraf Ghani during the inauguration of the Afghan Parliament which has been built by India, in Kabul on Friday, December 25, 2015. (Press Trust of India photo)

The statement said the two sides “exchanged views on the security situation in Afghanistan, which faces serious challenges of terrorism, extremism and narcotics”.

“Strongly condemning the barbaric incidents of terrorism in Afghanistan in recent months, the two leaders reiterated that peace in Afghanistan required elimination of terrorism perpetrated and supported from sanctuaries and safe havens,” the statement said.

Mr Modi and Mr Ghani also agreed that those perpetrating violence cannot be allowed to wield influence over any part of the mountain nation.

Mr Modi supported the Afghan government’s reconciliation process, and said the groups and individuals to be reconciled must give up violence and abide by the constitution of Afghanistan.

The Mi-25 choppers India is giving to Afghanistan were also mentioned in the statement, and both sides agreed to expand training opportunities for Afghan security and defence forces.

“…The two leaders pointed out that the Mi-25 helicopters provided by the Indian government to Afghanistan and their maintenance facility would address an important requirement”.

India has already delivered the first of four planned Mi-25 attack helicopters for use by the Afghan Air Force.

“They agreed to increase and expand training opportunities for Afghan National Security and Defence Forces in relevant Indian institutions, based on the requirements of Afghanistan,” the statement said.

Mr Modi also thanked Afghan authorities for ensuring the safety of the Indian embassy in Kabul, the four consulates in Jalalabad, Kandahar, Herat and Mazar-e-Sharif, and Indian nationals in Afghanistan, including those working on various development projects.