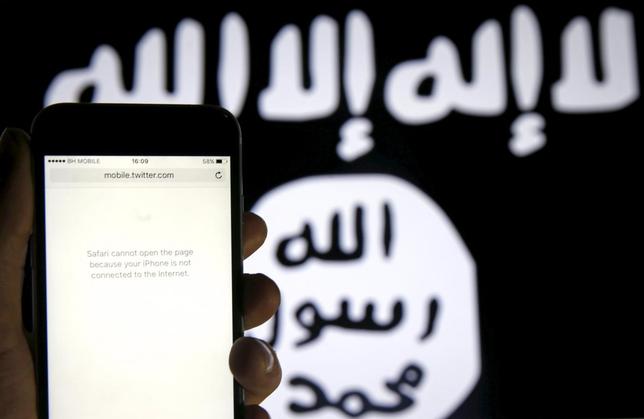 Iraq is trying to persuade satellite firms to halt Internet services in areas under Islamic State’s rule, seeking to deal a major blow to the group’s potent propaganda machine which relies heavily on social media to inspire its followers to wage jihad.

Social media apps like Twitter and Telegram are scrambling to limit Islamic State’s cyber-activities. So far that has proven to be a cat-and-mouse-game, with the group re-emerging through other accounts with videos showing beheadings and extolling the virtues of living in a caliphate.

For Iraq then, the key is to stop the militant group from accessing the web at all – a feat, which if achieved, could sever a significant part of a propaganda campaign that has inspired deadly attacks in the West.

Mobile networks are largely inoperable in the Islamic State-held swathes of Iraq, areas which also have little fixed-line broadband infrastructure. Militants instead use satellite dishes to connect to the web, or illicit microwave dishes that hook them into broadband networks in government-held areas, three telecoms industry sources told Reuters.

There are many challenges for the Iraqi authorities: within the satellite Internet industry, no one assumes responsibility for identifying and vetting end users, the territory under Islamic State’s often shifts, and a complex web of middlemen makes it tough to pinpoint who is selling militants Internet capacity.

The group has control over or operates in parts of western Iraq and northern and central Syria which have a population of up to 5 million people, according to the International Institute for Strategic Studies, most of them in Iraq.

To connect to the web via a satellite, all that is required is a V-sat terminal – a small dish receiver and a modem – and an Internet subscription.

In the IS-held northern city of Mosul, V-sat units can be bought for about $2,000-$3,000 at a sprawling electronics market near the university.

The official said Iraq was in talks with satellite companies covering Iraq to halt Internet services to IS-controlled areas, adding that he had received “positive signals” from them, but “the process is complicated and needs more time and procedures.”

Abu Dhabi state-owned Yahsat, both a satellite owner and provider of end-user connectivity through its consumer broadband brand YahClick, is the only company so far to cooperate with the ministry’s request, the official said.

Highlighting the complicated task, Reuters traced an IP address of an Islamic State fighter in Raqqa, the group’s de facto capital in Syria, which showed he was accessing the Internet using YahClick.

Yahsat would not directly comment on whether Islamic State had used its services, but said it complied with all laws and regulations. It has no official presence in Syria.

The company, among the biggest providers of satellite Internet in Iraq, relies on local agents to sell YahClick; three are listed on its website for Iraq, but other companies also sell the brand there.

“Anybody can become a reseller. It’s very informal and wholesalers probably want to keep it that way,” said the second industry source, who like the others declined to be named because they are not authorised to speak publicly.