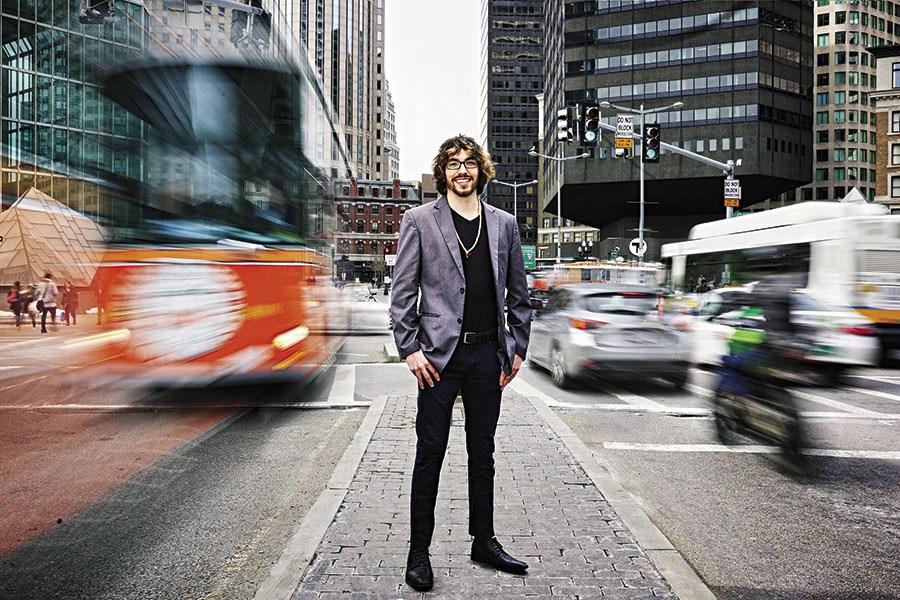 Street smarts: At TrueMotion, Brad Cordova built a mobile app that can tell whether you are texting while driving
Image: Michael Prince for Forbes

In early 2014, Progressive insurance held a contest to choose the best cellphone app to play Big Brother to its policyholders. The nation’s fourth-largest auto insurer wanted to track drivers’ mileage, time of day on the road and whether they were slamming on the brakes. Eleven companies entered. One was TrueMotion, a Boston-based startup co-founded by Brad Cordova, now 27, an MIT graduate school dropout who had taught himself to code at age 7. He had $3 million in seed funding but no paying customers.

Before the contest kicked off, Cordova thought his team had perfected their app—only to realise it was draining too much battery power, which meant they had to re-engineer it. “It was like climbing a mountain with a gun to your head,” he says. They worked 18-hour days feeding data into machine-learning algorithms, then testing multiple versions on thousands of drivers they recruited through Applause, a Boston user-testing outfit. That September, Cordova learned that TrueMotion was one of three finalists, but Progressive wanted refinements, like tracking if  users were texting while driving.

Cordova’s 10-person team got little sleep for the next four months. In April 2015, TrueMotion triumphed, signing an eight-figure deal with Progressive that has helped it land eight new customers and another $10 million in venture funding. Forbes estimates TrueMotion’s 2017 revenue will exceed $15 million.

TrueMotion is hoping to pull ahead of a pack of startups capitalising on a tectonic shift among auto insurers. For decades, they relied on actuarial categories like gender, age, address and past accidents to size up policyholders’ risks. Now they’re realising that “usage-based” data on individual driving habits are more reliable. Safe driving scores, says Progressive manager Dave Pratt, “are the best predictor we have of who will get into an accident.” A high score can earn a 20 percent premium discount from Progressive while bad drivers can see hikes of 10 percent.

Progressive pioneered the field when it started collecting driver data in 1998 with a gadget under the hood, then switched to a dashboard plug-in. To attract more users and save on hardware, it wanted a mobile app. The app would also have to detect if the user was behind the wheel and not in a passenger seat. In addition to GPS receivers, cellphones have sensors like accelerometers and gyroscopes that can measure speed and movement. Among the indicators Cordova’s team used to determine that users are driving: Sensor readings that show they’ve swung in or out of the car from the left-hand side and that the phone is secured in a dashboard mount.

For Cordova, who sets his alarm for 4 am and spends two hours reading research papers on machine learning, the challenge was nirvana. “If I’m not solving difficult problems,” he says, “I’m not happy.” He sleeps on a sensor-equipped mattress pad that logs his tosses and turns and rates his moods on a scale of one to 10 using an app he designed. “If you can’t measure it,” he says, “you can’t improve it.”

He traces his passion to track and improve driving habits to a day 11 years ago in his hometown of Belen, New Mexico. A driver on a cellphone rammed into his Hyundai, smashing Cordova’s head through the driver’s side window. So much blood flooded into his eyes that he thought he’d gone blind. A severe concussion caused intense headaches, dizziness and confusion for the next year. “It really scared me,” he says. “My biggest fear in life is something happening to my brain.”

Nonetheless, he won a scholarship to Notre Dame, where he majored in physics and math. While working toward a PhD in computer science and electrical engineering at MIT in 2012, he took an entrepreneurship class where he met Joe Adelmann, now 35, a former Air Force engineer whose father, like Cordova’s, worked as a truck driver. They bonded over their interest in driver safety, and after learning that auto insurers were tracking policyholders’ driving habits, they decided to start a company that could collect safety data through a mobile app.

The pair lucked out when Jon McNeill, 49, a former Bain consultant and veteran of six startups, heard them at a Harvard pitch session and volunteered to invest. McNeill pulled in Scott Griffith, 59, former CEO of short-term-rental company Zipcar, who agreed to serve as TrueMotion’s CEO, taking equity but no salary. After Griffith tapped contacts at venture firm General Catalyst (early investors in Kayak and Snapchat), McNeill scored the rest of TrueMotion’s seed capital from Bain Capital Ventures. Seven months after launch, Cordova abandoned his doctoral programme. Last May, the company moved its growing staff, now 39, into a 7,000-square-foot space on the sixth floor of a converted leather factory in downtown Boston. (McNeill, a TrueMotion board member, joined Tesla as president of global sales in late 2015.)

Progressive has rolled out TrueMotion’s app in four states, with plans to go nationwide by year-end. Thomas Hallauer, a consultant for Ptolemus, a company that advises insurers and their service providers on usage-based strategies, says only 7.5 million of the 200 million insured drivers in the US participate in voluntary driver-safety programmes. But with companies like State Farm, the nation’s largest auto insurer, offering discounts of as much as 50 percent to drivers with high scores, the numbers are  escalating. Hallauer says Cambridge Mobile Telematics, which says it has some 36 customers in 14 countries, is the US market leader, but “there is plenty of business to go around”.

Last summer, TrueMotion, in partnership with one of its insurance customers, ran a test on 2,800 drivers. Among those who used its app for six weeks, distracted-driving scores improved by an average of 20 percent. In July, TrueMotion released a free app that lets drivers know when they mess up. When Cordova tried it, he lost points for holding his phone. “I had forgotten my cellphone mount in the office,” he says. “My score was a humbling reminder.”

(This story appears in the 09 June, 2017 issue of Forbes India. You can buy our tablet version from Magzter.com. To visit our Archives, click here.)