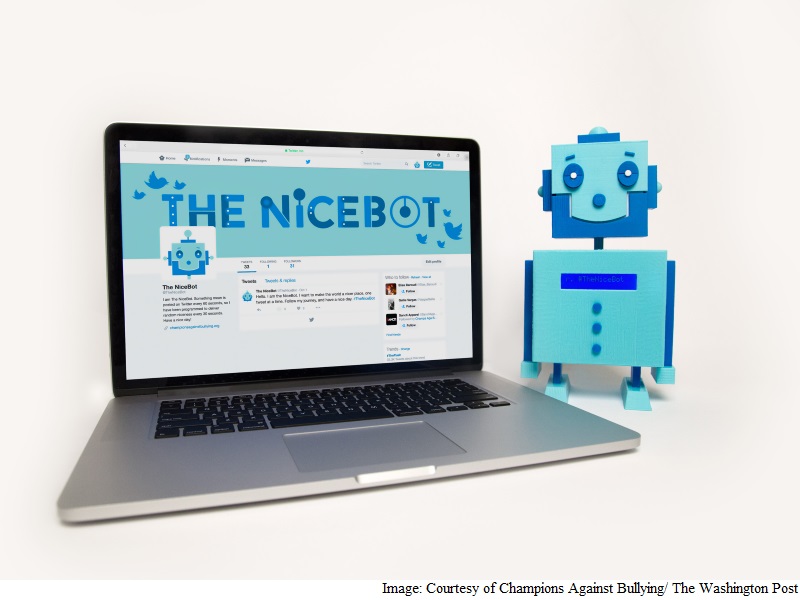 In the midst of the cold digital landscape, so often flooded with hateful comments and cutting insults, there now exists a little blue-faced robot who wants you to know that you are “more amazing than fresh towels from the dryer.”

Meet the Twitter @TheNiceBot, a cheerful spambot that blurts a small dose of positivism into the Twitteverse every 36 seconds by matching a randomly generated compliment with a randomly selected Twitter user. Born after its creators, anti-bullying nonprofit organization Champions Against Bullying and the Deutsch advertising agency, learned that a cruel or insulting comment is posted to Twitterevery 60 seconds (only every 60 seconds?), it sends out messages that overflow with all the cheesy sweetness of an elementary school Valentine’s Day card:

“@AmazingCinta I have a robot cavity, because you are so sweet. #TheNiceBot”

“@usa2016election Calculating how incredible you are would require mathematical equations far more advanced than my programming. #TheNiceBot”

“@OURHONEYFROOT Supernovas wish they were as bright as your smile. #TheNiceBot”

Some even sound slightly … more-than-friends.

“@Lili_140803 My processors overheat when I think about how great you are. #TheNiceBot”

“@ERlNxx Just thinking about you sends a positive surge through my circuits. #TheNiceBot”

And inevitably, there has been the rare misfire.

“@BillCosby You give me a happiness overload. #TheNiceBot”

(Then again, Cosby probably hasn’t been getting too many positive messages lately, so maybe this was appreciated.)

TheNiceBot was launched October 1 with the mission to “make the world a nicer place, one tweet at a time.” So far, it has sent 52,000 tweets and attracted about 4,200 followers. It’s programmed to eventually reach all 300 million Twitter users, a task that would take more than three centuries to accomplish (optimistically assuming that Twitter will still be a thing in the 2300s).

Alexandra Penn, founder of Champions Against Bullying, said that the organization, which works with kids, parents and educators in the US and Canada, wanted to do something different to draw attention to online toxicity.

“Last year, we created a PSA that called attention to teenagers who had committed suicide from being bullied,” Penn said in a statement introducing TheNiceBot. “This year, we wanted to combat the negativity of bullying with something more positive.”

At best, TheNiceBot might be a helpful way to spread awareness of cyberbullying. At worst, it’s a harmless, feel-good gimmick – but it isn’t likely to do much to alleviate hostile behavior online, said Sameer Hinduja, co-director of the Cyberbullying Research Center and a professor of criminology at Florida Atlantic University.

Cyberbullying is devastating, particularly for kids and teens, because it feels so personal, he said. An insult, or a compliment, doesn’t carry as much weight if it comes across as generic or random – which makes a spambot seem like a questionable choice for an online agent of change.

“When you think of somebody who says something kind, it doesn’t feel like spam because there’s a personal touch there – a person smiles, it’s warm,” Hinduja says. “Unfortunately, I feel like everyone’s just going to dismiss this without giving it a second thought, particularly because the user name has the word ‘bot’ in it.”

David Weinberger, a senior researcher at the Berkman Center for Internet and Society at Harvard University and an author who focuses on the impact of technology on ideas, apparently agrees:

“Thank you, @TheNiceBot! That means so little coming from a bot!”

But plenty of other people seem to appreciate it: It’s “a nice way to start the day,” noted one pleased Twitter user. And even if the TheNiceBot can’t possibly do much to make the digital landscape a safer or kinder place, it might inspire other, more effective or innovative ideas, said Hinduja.

“Instead of handing out a bracelet or a sticker, (Champions Against Bullying) is using programming to tap into social media networks in order to do something creative,” he said. “So I think that might be the take-home point. I don’t know how much this is going to accomplish, but they tried, and there’s something to be said about that.”

Despite an uphill battle, the Niceboot tweets on in the cynical cyberspace – a relentless digital cheerleader, trying again every 36 seconds.

“@Xzeynep_beyzaxx Thanks for just being you. #TheNiceBot”