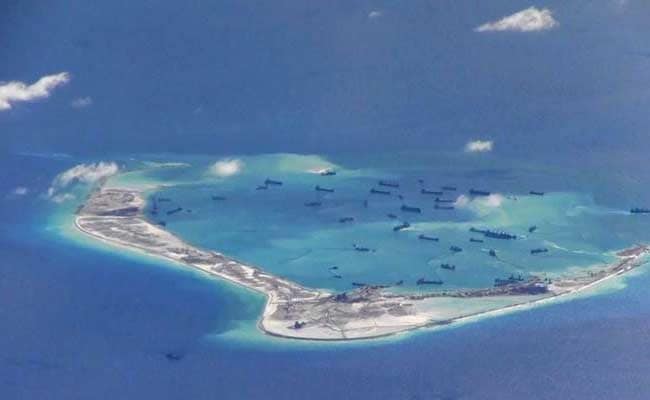 The United States routinely conducts B-52 training missions throughout the region, including over the South China Sea. (File Photo, Reuters)

BEIJING:  The United States said its two B-52 bombers had no intention of flying over a Chinese-controlled man-made island in the South China Sea, after Beijing accused Washington of “a serious military provocation” in the strategic waters with overlapping claims.

China’s Defense Ministry on Saturday accused the U.S. of deliberately raising tensions in the region, where China has been aggressively asserting its claims to virtually all islands, reefs and their surrounding seas. It reiterated that it would do whatever is necessary to protect China’s sovereignty.

Pentagon spokesman Mark Wright said that the Dec. 10 mission was not a “freedom of navigation” operation and that there was “no intention of flying within 12 nautical miles of any feature,” indicating the mission may have strayed off course.

The U.S. uses pre-planned freedom of navigation operations to assert its rights to “innocent passage” in other country’s territorial waters.

“The United States routinely conducts B-52 training missions throughout the region, including over the South China Sea,” Wright said in an email to The Associated Press. “These missions are designed to maintain readiness and demonstrate our commitment to fly, sail and operate anywhere allowed under international law.”

Wright said the U.S. was “looking into the matter.”

The U.S. takes no official stance on sovereignty claims in the South China Sea, through which $5 trillion in international trade passes each year. However, Washington insists on freedom of navigation and maintains that China’s seven newly created islands do not enjoy traditional rights, including a 12-nautical-mile (22-kilometer) territorial limit.

China’s Defense Ministry demanded that Washington immediately take measures to prevent such incidents and damage to relations between the two nations’ militaries.

“The actions by the U.S. side constitute a serious military provocation and are rendering more complex and even militarizing conditions in the South China Sea,” the ministry said in a statement.

The statement said that Chinese military personnel on the island went on high alert during the overflights by the B-52 strategic bombers and that they issued warnings demanding the aircraft leave the area.

As is China’s usual practice, the Foreign Ministry took a more diplomatic tone, saying the situation was stable.

Wang also said that while China understands the concerns of nations from outside the region – a clear reference to the U.S. – they should “do more to benefit peace and stability and support efforts to find a resolution through talks, and not manufacture tensions or even fan the flames.”

“We don’t think this is a constructive approach and will not receive the support and welcome of relevant nations,” Wang said.

The Foreign Ministry said it had “lodged solemn representation with the United States” over the incident.

China’s latest protest comes amid a simmering dispute over Washington’s approval this past week of the first arms package in four years offered to Taiwan, Beijing’s self-governing rival. Beijing, which regards Taiwan as part of its territory, demanded the deal be scrapped to avoid harming relations across the Taiwan Strait and between China and the U.S.

Beijing filed a formal diplomatic complaint and its Foreign Ministry said it would take “necessary measures, including the imposition of sanctions against companies participating in the arms sale to Taiwan.”

The main contractor behind the weaponry is Raytheon. U.S. defense firms are forbidden to sell arms to China.