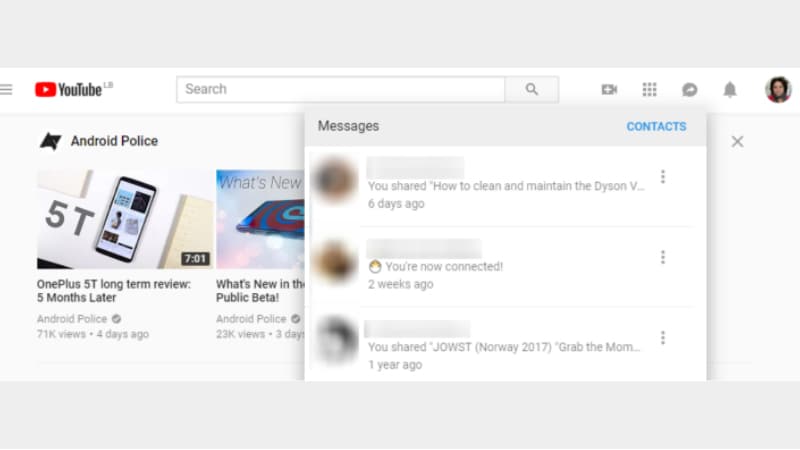 YouTube, one of Google’s most successful products, has been a constant work in progress, with new features being added and tested continuously. The company is currently testing an incognito mode that doesn’t save history, and now a new feature that was first exclusive just for mobile users, is rolling out for web users as well. YouTube for Web is rolling out the ability to message your friends, and share videos with them easily. Furthermore, Android users are getting the new collapse video feature that was just exclusive to iOS until now. Lastly, Google is also testing a new way to show you videos in your subscription feed, instead of just showing you what’s recent.

Starting with the new sharing and messaging feature on Web, it is being rolled out slowly to users, so if you don’t see it right away, don’t fret. You will notice a new chat bubble right between the notifications and YouTube apps on the Web title bar, reports Android Police. This bubble will open your existing messages, and if you haven’t spoken to anyone yet, then it will ask you to choose a user from your Contact list to begin chatting with. This messages box will let you share videos, write a message, and even read the replies. Furthermore, the sharing feature has also been revamped to support the new messages feature. When you click on Share, it now opens a pop-up window that lets you first share with your contact list on YouTube. Below that are the different embedding and social media icons that users popularly use, and the actual link is placed after that.

The YouTube video collapse feature has been around for a while now, but it works differently on Android and iOS. While iOS users see a small bar at the bottom, with the video and pause and forward buttons in one line; Android users just see the video in PiP mode with no additional functionality. Now, Android users are getting the iOS collapse feature as well, bringing more control. This is also a server side update, reports Android Police, but some users also see it when they update to the latest version.

Lastly, YouTube seems to be testing a new feature to show videos in your subscription feed. Earlier, it used to show users’ videos based on their upload time, which means the most recent videos showed up first. Now, however some users are seeing personalised videos in their feed based on their viewing patterns. YouTube confirmed this via a reply to a Twitter user’s query.

Let us know if you’re seeing any of these new features in your YouTube web and app clients in the comments section below!