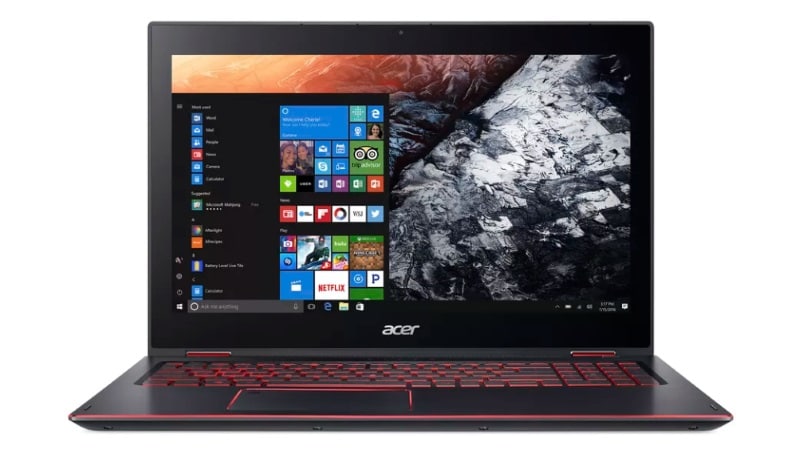 Acer on Sunday launched its ‘Nitro 5 Spin’ entry-level gaming laptop and it seems like the company doesn’t want casual gamers to feel left out. The new Nitro 5 Spin has been launched with a starting price of $999 (roughly Rs. 64,000) and EUR 1,199 (roughly Rs. 76,800), which makes it fall in the affordable range among gaming laptops. The Acer Nitro 5 Spin will be made available for purchase in North America and Europe from October.

The Acer Nitro 5 Spin runs Windows 10 and sports a 15.6-inch full-HD (1080×1920 pixels) rotating display and as mentioned earlier, is powered by eighth-generation Intel Core processors. The new gaming laptop from Acer comes with Nvidia GeForce GTX 1050 graphics and should be suitable for playing games like Dota 2, Overwatch, League of Legends, as per the company. The Nitro 5 Spin is available with PCIe SSD of up to 512GB storage.

“With a convertible design that features four modes, the Acer Nitro 5 Spin is a versatile gaming device that opens up exciting new usage scenarios for casual gamers on the go,” James Lin, General Manager of Commercial & Detachable Notebooks, IT Products Business at Acer, was quoted as saying in the company’s release. “Power users will also appreciate the great performance and battery life of the Nitro 5 Spin, while enjoying the superb visuals and immersive audio that it delivers,” he said.

The Acer Nitro 5 Spin has been claimed to provide up to 10 hours of battery life by the company. The new convertible laptop from Acer comes with two-front facing speakers and a subwoofer as well. The Nitro 5 Spin includes a fingerprint reader to help quickly and securely verify an owner’s identity through Windows Hello, logging them on with a touch of the finger.

“Our new 8th Gen Intel Core processor family is the most powerful processor designed for what’s coming next,” Chris Walker, Vice President, Client Computing Group at Intel Corp, was quoted as saying. “Acer’s new Nitro 5 Spin notebook capitalizes on the up to 40 percent performance boost over just last year, making it possible to take casual gaming and rich entertainment on the go in a flexible, sleek device,” he added.