After It Was Charred By A Rocket Explosion, NASA Has A New Launch Pad 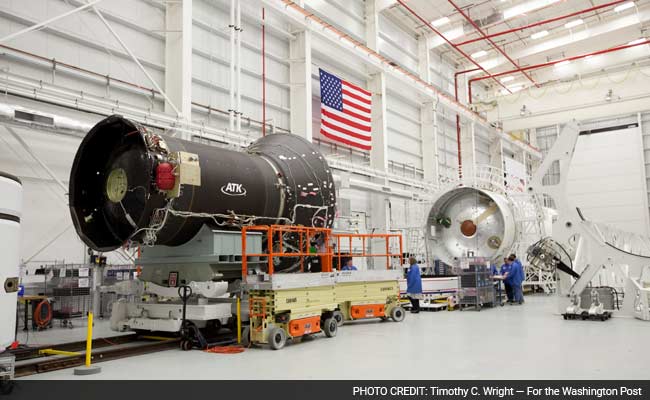 A look at the assembly building where new Antares rockets were being assembled. (Photo by Timothy C. Wright for the Washington Post.)

WALLOPS ISLAND, VIRGINIA:  The crater left by a rocket explosion has been filled in and leveled, as if it never happened. The launch pad, once charred and damaged, has been repaired. And a new rocket is getting ready to fly again.

More than a year after a rocket blew up shortly after takeoff, devastating this NASA launch facility, the center is coming back to life. Repairing the launch pad, operated by Virginia Commercial Space Flight Authority, cost $15 million, but it is now ready to host another launch, the authority’s executive director, Dale Nash, told reporters during a tour of the facility Thursday.
“The pad probably looks better than it’s ever looked,” he said. “We are ready to roll.”

That will not happen until next year, when Orbital ATK, the company under contract by NASA to deliver cargo to the International Space Station, tests its new rocket on the pad in March. In May, it is slated to fly its Antares rocket, outfitted with new RD-181 engines, for the first time since the explosion in October 2014.

Earlier this month, the Dulles, Virginia-based company took a significant step forward when its Cygnus spacecraft delivered cargo and supplies to the International Space Station. But that was aboard an Atlas V rocket it contracted from the United Launch Alliance.

Photographers on a NASA-led a tour of its facilities on Wallops Island, where a rocket explosion damaged a launch pad last year. (Photo by Timothy C. Wright for The Washington Post.)

Now, Orbital ATK is getting ready to fly its new Antares rocket, which was sitting in a massive hangar here on the tip of Virginia’s Eastern Shore about 175 miles southeast of Washington. It expects to fly one more cargo mission with an Atlas rocket before the Antares is ready.

“We’re up to full operational tempo,” said Mike Pinkston, Orbital ATK’s vice president and general manager of the Antares program. “We can’t wait to get out on the pad.”

The October explosion, attributed to a problem with the engines, sparked a massive fireball that could be seen for miles and charred much of the launch pad here. The crater was 50 to 60 feet wide, Nash said, and two of the lightning towers came down.

The mishap was a blow not just to the company, but to NASA, which had placed a big bet on the private sector. The agency had retired the space shuttle in 2011 and decided to contract out flights to the space station to commercial space companies so it could focus on other missions, such as deep space exploration.

It was all going smoothly until Orbital ATK’s rocket blew up. Then eight months later, SpaceX, NASA’s other cargo supplier, saw its rocket explode. Both companies vowed to return to flight quickly, and NASA said its confidence in them never wavered.

It was a huge relief for the agency when Orbital ATK’s Cygnus space docked with the station last week and successfully delivered its cargo. SpaceX’s return to flight could come this weekend when it is scheduled to launch a commercial satellite.