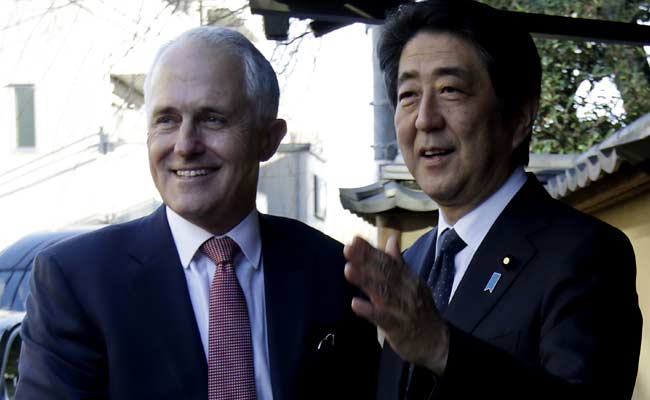 The whaling fleet set sail this month for the Antarctic after a one-year pause, sparking a formal protest from 33 countries led by Australia and New Zealand.

“Australia is very disappointed that Japan has resumed whaling in the Southern Ocean this year,” Turnbull said in Tokyo, according to the Australian Broadcasting Corporation.

While Turnbull’s first visit to key ally Japan today will cover a broad range of topics, including defence cooperation and trade, the controversial whale hunt is also on the agenda.

“We recognise that is a point of difference of opinion,” Turnbull said.

Reiterating his pledge to raise whaling in talks with Abe, he added that as “good friends” the two sides “should be upfront and frank about our differences of opinion, put them on the table and deal with them, seek to resolve them”.

He was careful, however, to emphasise that differences over whaling would not damage overall ties.

Turnbull described the opposition of Australia and other countries, including the United States and Britain, to Japan’s whaling as “principled”, stressing their stance must be made clear to Japan.

But he also said it was “important” to “understand the Japanese position”.

Tokyo said last month it planned to kill 333 minke whales for scientific research this season in spite of a worldwide moratorium and widespread opposition.

The fleet’s departure marked the end of a year-long hunting suspension prompted by a United Nations’ International Court of Justice ruling in 2014 that the annual hunt was a commercial venture masquerading as research.

Japan sent a fleet to the region last year but it did not hunt any whales.

Australia took Japan before the court in 2010 to try to end the annual hunts, decried by environmentalists but defended by Japan as an integral part of its traditional food culture even though the consumption of whale meat is miniscule.

Despite tensions over whaling, the two countries have a flourishing relationship in trade and tourism and have moved to strengthen defence and security ties.

Japan is competing with French and German bidders to build a next-generation submarine fleet for Australia in a contract worth up to Aus$50 billion ($35.7 billion).

Australia and Japan have also expressed concern about rising tensions due to overlapping territorial claims by China and several Southeast Asian countries in the South China Sea, with Turnbull today calling for involved parties to reduce tensions.

“We all have a vested interest in disputes being resolved peacefully, in accordance with international law,” Turnbull said.