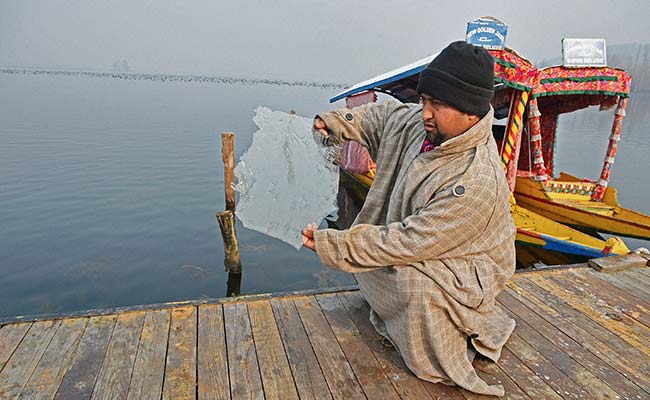 A boatman shows a piece of frozen surface of Dal Lake on a cold morning in Srinagar. (PTI Photo)

The traditional 40-day period of extreme cold, known as ‘chillai kalan’, began in Kashmir today as mercury dipped several degrees across the state.

Night temperatures have fallen below the freezing point in most places including Srinagar where minimum temperature fell to minus 5.6 Degree Celsius.

The temperature at famous ski resort of Gulmarg in north Kashmir plunged to -11 degree Celsius.

During this period, people brace up to face the bitter cold and expectantly look forward to heavy snowfall that would replenish rivers, streams, springs and lakes in Kashmir.

“All perennial reservoirs of Kashmir in the mountains, those feed the local rivers, streams, lakes and springs during summer months are replenished by the snowfall during chillai kalan, Mansha Nisar, a teacher of environmental sciences, told IANS.

“The snowfall during this 40-day period gets frozen and lasts longer. It is this snowfall that adds to the glaciers of the Valley. Any snowfall after the chillai kalan does not last long,” she added.

Srinagar, Kargil & Leh highway has also been closed because of snowfall.

Icicles hanging from rooftops, frozen water bodies and snow games are a major tourist attraction during this season.

People start lighting small fires around water taps to de-freeze them in the mornings and before the first trickle starts, another freeze hits the water tap.

Most residents leave their water taps half running during the nights to prevent freezing of drinking water supply pipes.

It is not just chillai kalan that heralds the extreme cold in Kashmir. This 40-day period is followed by ‘chillai khurd’ which last 20 days and then ‘chillai bachcha’ that last another 10 days.