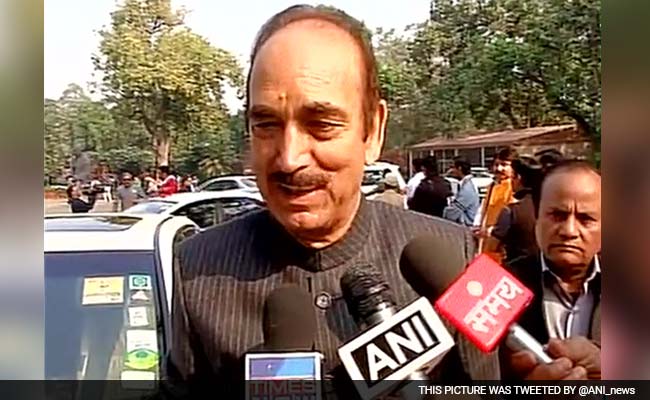 Leader of Opposition in Rajya Sabha, Ghulam Nabi Azad said the Opposition is willing to support the Juvenile Justice Bill.

NEW DELHI:  Congress has accused government of playing “brazen mischief” by proposing to bring today the unlisted Juvenile Justice Bill in Rajya Sabha, alleging it was to “defame the opposition” and divert attention from Delhi and District Cricket Association (DDCA) issue.

“Let them not do this mischief. This is a total brazen mischief on the part of the government…. This is only to divert the attention of the opposition from raising other issues, about DDCA,” Ghulam Nabi Azad said after Congress disrupted proceeding in both the Houses demanding resignation of Finance Minister Arun Jaitley for alleged graft in DDCA.

Asked if Congress will support the bill, the Leader of Opposition in Rajya Sabha said, “Yes, we have said bring it tomorrow. Let them bring it tomorrow… the question is it should come before the House. There are 27 opposition parties and we will discuss it tomorrow,” he said.

Mr Azad accused the government of making a “clever” attempt to defame the opposition. “You see the cleverness. This is called cleverness. Bring it tomorrow because it is not listed. It is an after-thought.

“This is only to divert the attention of the opposition from raising other issues, about DDCA, so that we do not raise the DDCA issue. Bring the Juvenile Justice Bill, so that they will be abused left and right by mediapersons. Please don’t get into that trap,” he said outside Parliament.

Mr Azad said he told the government at the all party meeting to bring this Bill before the House, but it was not listed in today’s business.

“Now it is an after-thought, so that the opposition does not rake up the issue of the Finance Minister. So they said it is ok we will bring up this bill and pass this also. Just to defame the opposition,” he said.