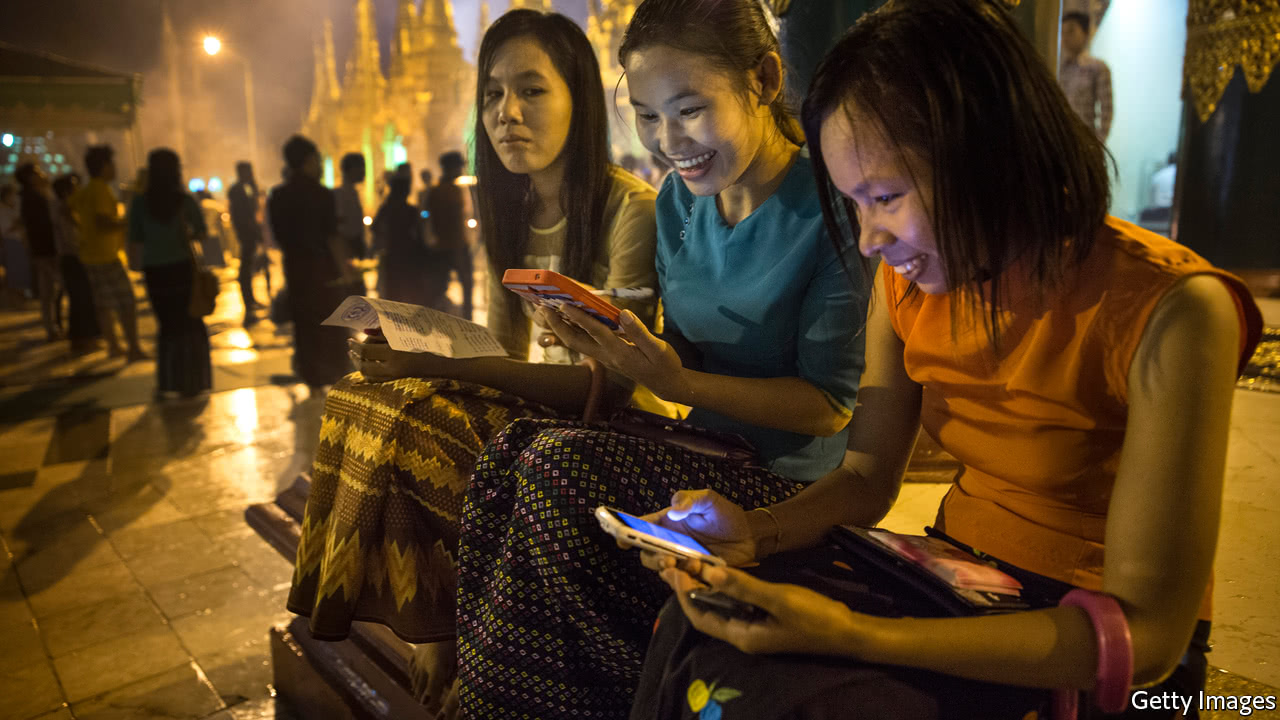 MYANMAR’S democratic transition sometimes seems marked as much by continuity as by change. Depressingly, the army continues its bloody persecution of Rohingya Muslims in the west, for example (see article). But elsewhere moves to open the country’s markets, started by the preceding military regimes, have gathered pace. New commercial and financial services are springing up.

Take Khin Hlaing, who owns Global Mobile Shop, a small store surrounded by tarpaulin-covered stalls selling fresh fruit in Hlaing Tharyar, an industrial area outside Yangon, the biggest city. He is one of almost 12,000 agents for Wave Money, Myanmar’s largest mobile-money transfer platform. Most days about 20 people use his shop to send funds to friends or family elsewhere in the country. One customer, who walks in wearing a long red longyi and delicately beaded top, says she was at first nervous about Wave. A clothesmaker, she now sends earnings through it twice a month at a cost of 500 kyat ($0.37) a go. She says Wave’s appeal is its “convenience”.

Globally 2bn people lack savings accounts and access to credit. Cash-dependence leaves them vulnerable to crime. And governments struggle to collect taxes, spend on development and get money to those in need. Economies suffer as small businesses are starved of loans. Digital initiatives could help 1.6bn people obtain access to financial services for the first time, reckons the McKinsey Global Institute, a research wing of the consulting firm. Those providing them could boost their balance-sheets by $4.2trn into the bargain.

In Myanmar cash is king. Fewer than one in ten of its 53m people has a bank account. But an explosion in smartphone use means rudimentary financial offerings are appearing where even roads are rare. After the end of the state’s mobile-phone monopoly four years ago, mobile penetration jumped from 7% to 89% now. Billboards line Yangon touting the selfie-taking skills of phones made by Vivo and Oppo, two Chinese handset-makers. Teenagers blithely test them at street-corner noodle stalls. Foreign telecoms firms, notably Norway’s Telenor and Qatar’s Ooredoo, have entered the market, bringing cash with them: in 2014 and 2015 telecommunications accounted for $2.8bn in foreign direct investment, almost a third of the total.

Wave Money is Telenor’s mobile-money service; Ooredoo’s M-Pitesan, which launched last month, is a fledgling rival. Others are emerging too, but Wave is ahead of the pack. It has backing from Yoma Bank, Myanmar’s fourth-largest, with a balance-sheet of $1.3bn. Wave did charge more than banks for transfers, says its boss, Brad Jones. But it lowered its prices last month to undercut most of them. For customers, it may still be an easier option. Rigid business hours mean that people often have to skip work to stand in queues at the bank instead. More than six in ten of Wave’s transactions occur in the evenings or at weekends, Mr Jones estimates. Besides, banks are few and far between in Myanmar. Hal Bosher, the Canadian head of Yoma Bank, says it can cost $500,000 to set up a new branch, and he has just 80. “I’ve got branches with bullet holes in, and branches which flood,” he explains. Wave, by contrast, has a presence in 255 of Myanmar’s 330 townships.

Last year Myanmar’s central bank introduced tough rules on mobile financial services, inspired by those in countries such as Kenya. Wave was the first company to register under them in October and uses the details associated with a customer’s SIM card to satisfy identification requirements, for example. Mr Jones points out that the small sums transferred mean the service is unlikely to attract fraudsters and criminals. Sharmin Sultana of BRAC Myanmar, the Burmese arm of a big Bangladeshi NGO, hopes that the platform can speed up repayments for microloans and eventually be used to develop credit scores. Wave has yet to turn a profit, despite processing almost 100,000 transactions a month. Its focus so far on spreading its name, and raising awareness of what it does, has not been cheap. But Mr Bosher exudes patience: change will come because “the banking sector in Myanmar is so bad”.