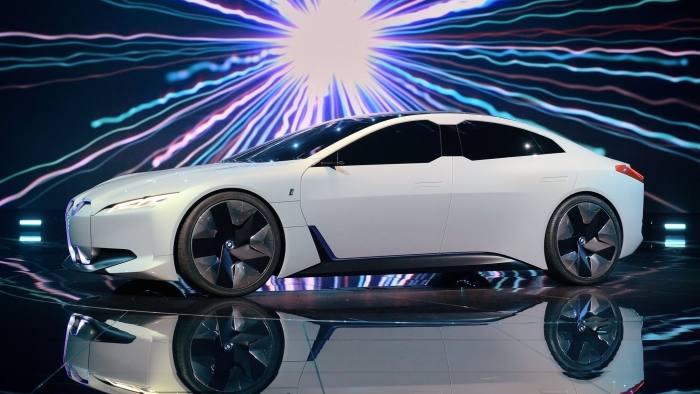 Tesla did not attend the Frankfurt Motor Show this year, but its presence was felt in every corner of the massive event, which will host close to a million visitors before it wraps up at the end of the month.

The show was a virtual arms race as the world’s carmakers race to electrify their entire fleets as city bans for diesel and government mandates for cars to be fully-green in the future puts pressure on them to adopt new technology.

“There was a competition under way this week to promise the greatest number of future electric vehicles,” says Max Warburton, analyst at Bernstein.

“All the diesel models have been hurriedly pushed to the back of the show stands, with electric . . . front and centre.”

Matthias Müller, chief executive of Volkswagen, the world’s largest carmaker last year, pledged the group would build 50 pure electric car models by 2025, with another 30 hybrids. This was in contrast to two years ago at the last Frankfurt Motor Show when as the CEO of Porsche he unveiled just one electric model.

“This is largest electrification initiative in automotive history,” he said at the opening of the show, which ends on September 24.

Not to be outdone, Daimler boss Dieter Zetsche said the Mercedes owner’s “entire portfolio” will be electrified by 2022.

The Smart brand will also become fully electric by 2020 — making it the first internal combustion engine marque to make the switch. “The inventor of the automobile is reinventing itself,” he said.

BMW boss Harald Krüger also weighed in on the importance of electric cars. He told reporters at the show: “Our top priority now as a company is electric mobility.”

Numerous executives in Frankfurt said the shift to electric is occurring much faster than anticipated, just as the death of diesel looks likely to be sooner than expected as bans on the technology in Stuttgart, Paris and Madrid hasten its demise.

But as carmakers race to replace diesel with electric, concerns are mounting that they may have to sacrifice margin to succeed in selling battery vehicles to the public.

Daimler warned early in the week that margins could fall by up to two percentage points as early as 2019, given the costs associated with procuring batteries and redesigning cars.

It set a €4bn cost-savings plan to mitigate lower profitability from its “EQ” series of electric cars.

Takahiro Hachigō, the chief executive of Honda, tells the FT he is confident that the bottom line would improve once electric cars really hit a mass scale. “Until we reach certain volume, the profitability will not be as great,” he says.

The carmaker was one of those to issue specific targets for electrification of its product line-up this week, saying that two-thirds of its global sales would be offered with a hybrid engine as an option by 2030, and by 2025 in Europe.

“Looking at the history of the automotive industry, whenever new technology has appeared the car industry has evolved.”

Some of the bigger suppliers were more optimistic about the immediate future, as they see the age of electric cars as a chance to increase their margins and amount they sell into each vehicle.

More electric sales will result in “faster revenue growth and more profitability in our power-train business,” says Kevin Clark, chief executive at Delphi, the component and software maker that will next year spin out its engine division. “The sense in all this is the pace is picking up.”

However, some car bosses are not happy with government moves to ban non-electrified cars with both the UK and France saying they will ban sales of traditionally powered vehicles from 2040.

“I want to be very clear here,” Carlos Tavares, chief executive of PSA, the owner of Peugeot, Citroën and Opel-Vauxhall, told reporters at the show. “We are moving from a technology-neutral era into an instruction to go electric.”

He said interventions to get more electric cars on the road are an unwelcome intrusion. In short, politicians are attempting to pick winners in a world with several competing technologies, from hybrid and electric to fuel cell technologies.

“If you have ministers in Europe who say they will forbid the use of internal combustion engines, then I have to comply and we will have to transform, re-engineer and retrain,” he added. “But if electrification is not profitable in future, we all have a problem.”

Governments have been making demands for cars to be cleaner, more efficient and safer, but if cars are going to be electric and self-driving, governments also need to step up their game to provide communications infrastructure so cars can understand the surrounding environment.

“We think far more holistically than just the car. If the city cannot deploy infrastructure, then there is nothing for the car to talk to,” says Thierry Klein, vice-chair of the board at 5GAA, an association that aims to bridge the gap between carmakers, IT providers and governments.

Mr Klein says when he speaks to city and state governments about making investments in road technology that would enable cars to speak with each other, he gets blank stares. “All of a sudden people step back and realise they haven’t thought about it,” he says.

Volkmar Denner, chief executive of Bosch, the world’s largest parts supplier, says the rapid pace of development is forcing carmakers, suppliers and the IT industry to move from broad strategy to real business decisions.

“It’s now a time of execution,” he says. “Which products can be brought to market in the next few years? It’s not a far vision. We must resolve some urgent problems of mobility that we have today.”

The sense of the show was that of the industry embracing electrification not because they want to, but because their old technology will become obsolete in the decades to come.

“It has been astonishing to hear all these German automakers, led by men who almost smell of gasoline, stand up and embrace electrification,” says Mr Warburton at Bernstein. “It feels like history being made.”

The power drain of new technology

As electric cars become reality, carmakers and their suppliers are confronting challenges that appeared less tangible when the dream of electric cars was a more distant vision.

A self-driving car of the future will be equipped with at least 20 sensors using cameras, radar and lidar to ‘see’ its surroundings.

Some of the data must be transmitted to the cloud so the car can communicate with its surroundings, but programming the software to only send the relevant data is a central challenge, says Elmar Degenhart, chief executive of parts supplier Continental.

A person watching Netflix in HD at home would consume three gigabytes of data per hour; Mr Degenhart says a self-driving car collects raw data volume of up to 15 gigabytes per second. “We need a different kind of electronic architecture in the vehicle to handle these volumes,” he says.

The energy just required to power these self-driving systems is so great that a prototype electric car with a 400km range can only drive 200km autonomously, notes Scott Gallett, vice-president of marketing for BorgWarner, a maker of propulsion systems.

“One of the things people don’t talk about is just how much energy is really required by the computers, the sensors, the radars,” he says. “Some of the prototypes out right now require just as much as energy to drive autonomously as it does to propel the vehicle.”

Mr Gallett thinks hybrid vehicles — often considered a stop-gap measure to full electric cars — will experience a lengthier phase than many assume, because if autonomous technologies become popular then cars driven solely by batteries might not have enough energy to power both the car and the computing system.