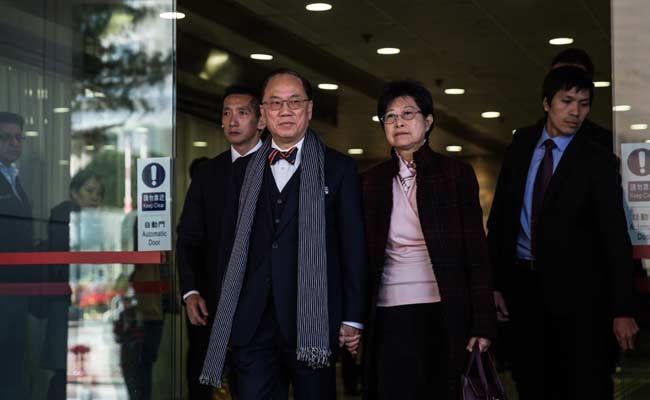 HONG KONG:  Hong Kong’s former leader Donald Tsang, who ended his term in disgrace after accepting favours from tycoons, pleaded not guilty to misconduct charges today in the latest high-profile corruption case to hit the city.

Tsang, 71, held the leadership post of chief executive for seven years from 2005 and is the highest-ranking Hong Kong official to face a corruption trial.

He had been under investigation by the city’s Independent Commission Against Corruption (ICAC) since he left office in June 2012.

Tsang is charged with two counts of misconduct in public office.

Wearing his customary suit and bow-tie, Tsang spoke briefly in court, saying: “I plead not guilty” to both charges.

Magistrate Jason Wan then referred the case to the High Court for trial — a date has yet to be set.

Tsang was released on bail and did not speak to reporters when he left the city’s Eastern Court.

The charges relate to Tsang’s failure to disclose his plans to lease a luxury flat in the southern Chinese city of Shenzhen which was owned by a major investor in a broadcaster seeking a licence from the Hong Kong government, the ICAC said.

Tsang also failed to declare that an architect he proposed for a government award was employed as an interior designer on the flat.

Tsang said previously that he had “every confidence” he would be exonerated.

The case comes less than a year after Hong Kong property tycoon Thomas Kwok and the government’s former deputy leader Rafael Hui were jailed for graft, following Hui being found guilty of taking bribes from Kwok and Kwok’s brother Raymond.

While serving as chief secretary for administration, Hui was Tsang’s deputy from 2005 to 2007.

Compared to the mainland, Hong Kong had been seen as relatively graft-free. But new cases in the semi-autonomous Chinese city have fuelled public suspicions over cosy links between authorities and business leaders.

Concerns have also been raised about the role of the Chinese system of personal connections, or “guanxi”, which greases the wheels of business.