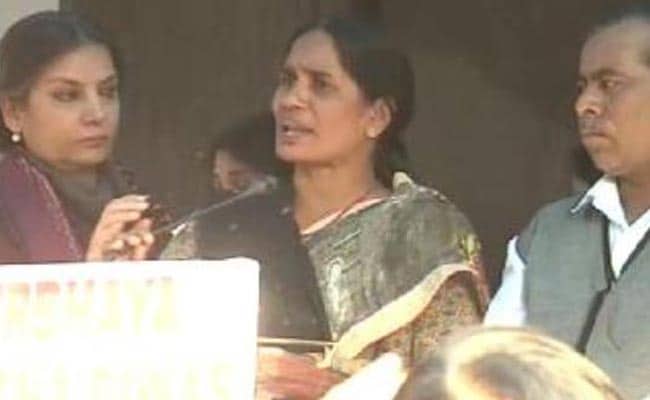 Asha Devi, the mother of Jyoti Singh, who was brutally gang-raped on December 16, 2012

NEW DELHI:  Three years to the day a young medical student was gang-raped and tortured on a moving bus in Delhi, an incident that shook India to the core, her mother revealed her name to the world, saying: “My daughter was Jyoti Singh and I am not ashamed to name her.”

At a meeting organised in the heart of the capital, Asha Devi said she was proud to name her daughter, who came to symbolise the fight for women’s safety and security and became the catalyst for major changes to the law on crimes against women.

Asha Devi stood up to make her point just after NDTV’s Barkha Dutt commented: “While Nirbhaya was an apt name to convey courage and fearlessness, it disturbed me that even today we could not name her because in this country the stigma around rape continued to create a conspiracy of silence, even though the shame was that of the rapist’s and not of the woman’s.”

Speaking on the youngest of the six rapists, who is expected to be released from a reform home on December 19, she said: “On her third anniversary, the culprit is being set free. Where is the justice is in that?”

Both parents have strongly appealed against the release of the “juvenile”.

Actor Shabana Azmi, who attended the meet with her husband and renowned writer Javed Akhtar, said: “They (Jyoti’s parents) have changed rape discourse in the country. We need to ‘shift the blame, shift the shame’.”

In Parliament, where actor-politician Hema Malini said the “juvenile” should be given the same punishment as the other convicts, who have been sentenced to death.

“The juvenile did more harm than the others. He has a devilish mind. He will not be corrected in rehabilitation. He should be punished so that everyone fears the law of the country,” Ms Malini, a BJP parliamentarian, said in the Lok Sabha.

The convict was below 18 when he and five others attacked the student and her friend. He was sentenced to three years in a reform home, a punishment seen by many as disproportionate to the enormity of the crime and spurred demands for changes in the law so teenagers involved in serious crimes can be tried as adults.