NASA releases new close up of Pluto, now in colour 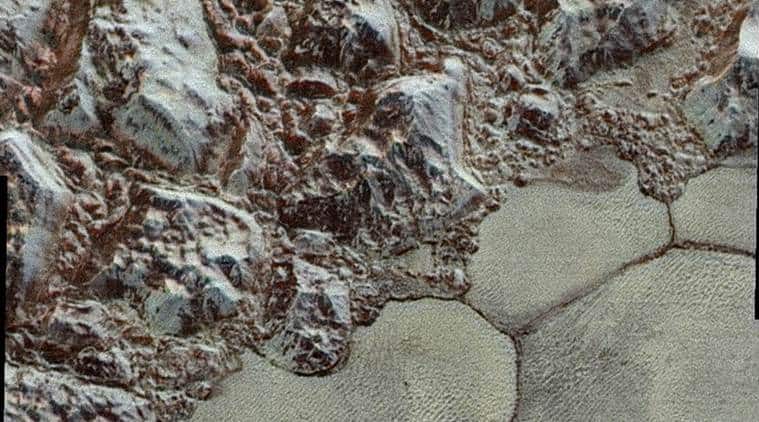 NASA has released an enhanced colour mosaic that combines some of the sharpest views of Pluto which the US space agency’s New Horizons spacecraft obtained during its historic flyby of the icy-dwarf planet.

The pictures are part of a sequence taken near New Horizons’ closest approach to Pluto on July 14 this year, with resolutions of about 77-85 metres per pixel – showing features smaller than half a city block on Pluto’s surface.

Lower resolution colour data (at about 630 metres per pixel) were added to create the new image.

The images form a strip 80 kilometres wide, trending from the edge of ‘badlands’ northwest of the informally named Sputnik Planum, across the al-Idrisi mountains, onto the shoreline of Pluto’s ‘heart’ feature, and just into its icy plains.

They combined pictures from the telescopic Long Range Reconnaissance Imager (LORRI) taken approximately 15 minutes before New Horizons’ closest approach to Pluto (from a range of only 17,000 kilometres) with colour data gathered by the Ralph/Multispectral Visible Imaging Camera (MVIC) 25 minutes before the LORRI pictures.

The wide variety of cratered, mountainous and glacial terrains seen in the images give scientists and the public alike a breathtaking, super-high-resolution colour window into Pluto’s geology.